Greece's new conservative prime minister wants to implement reforms more far-reaching than those imposed by the EU. He has called for German investment in the country. 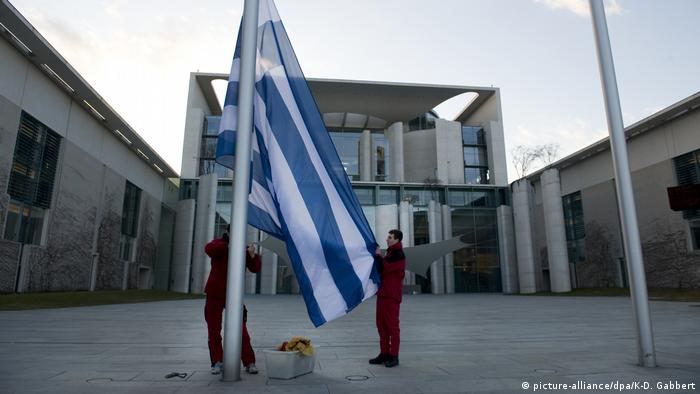 In a joint press conference with German Chancellor Angela Merkel, he said Greece wanted to pursue financial reforms well beyond those the European Union had mandated.

"We want to regain trust and credibility, and then perhaps we want to exchange views on debt," he said.

The conservative head of government said the Greek economy was strong enough that there would be no need for further debt relief and that it would meet its ambitious financial targets for 2019 and 2020.

He said his government was focusing above all on reforms and investment, adding that if the Greek economy grew faster, it would also be easier to repay debts.

Merkel praised the government's plans for reforms, particularly moves to push ahead with privatization. "This also means that there are investment opportunities for German companies. The German economy will certainly like to take advantage of this," she said.

When asked about demands for WWII reparations from Germany, a topic that many Greeks feel was never settled in full despite agreements in 1960 and 1990, he spoke diplomatically, but indicated Greece would continue to pursue the issue.

The solution to this problem was "important for the closer integration of our two countries," he said.

In April, the left-wing government of the time called on Germany to negotiate reparations for war damage, a step which Mitsotakis' Nea Dimokratia (ND) party supported in parliament. Three years ago a Greek commission of experts had estimated the claims at up to €290 billion ($320 billion).

Speaking on migration, a topic that has led to deep fractures within the European project, he said Greece would try to accelerate returns of migrants to Turkey while improving living conditions for refugees in Greece.

Merkel stressed that both countries stood by the EU-Turkey agreement. "I am pleased that one of the priorities of the new Greek government's work is to really bring this agreement to life now."

US seeks Indonesia alliance against Chinese 'aggression' 0m ago