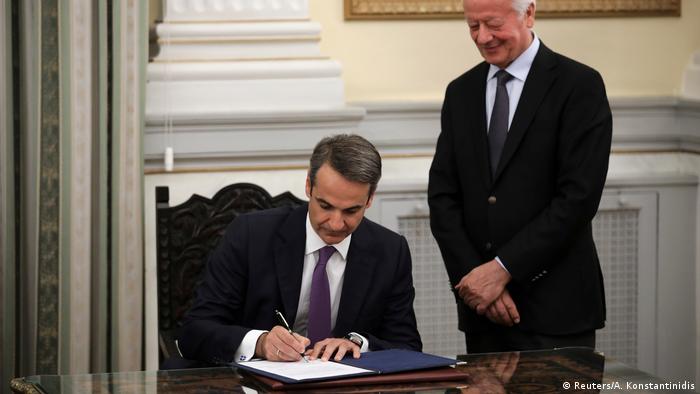 Mitsotakis' New Democracy party won 39.8% of the vote, giving him 158 seats in the 300-member parliament, a comfortable governing majority.

Tsipras' Coalition of the Radical Left, or Syriza, garnered 31.5%. The far-right Golden Dawn, Greece's third-largest party during the height of the financial crisis, failed to make the 3% threshold to enter parliament.

"The Greek people gave us a strong mandate to change Greece. We will honor it to the full," Mitsotakis said after taking his oath of office in a televised ceremony. "Hard work begins today. I am completely confident that we will prove equal to the challenge."

Mitsotakis, a former banker, has also pledged to create jobs and "steamroll" obstacles to business.

Later, Mitsotakis named a Cabinet, which he said would be sworn in on Tuesday and meet on Wednesday.

The vital post of finance minister went to 45-year-old Christos Staikouras, a former junior finance minister with a PhD in banking from London's City University. Nikos Dendias, 60, who has served as justice and defense minister in previous conservative governments, is to head the Foreign Ministry.

Harvard-educated Mitsotakis is the son of former Prime Minister Constantine Mitsotakis, one of the country's longest-serving parliamentarians. His sister Dora Bakoyannis is a former minister and Athens's first female mayor.

Mitsotakis faces the challenge of keeping Greece's international creditors happy while implementing the measures he promised to ease hardship on Greeks, such as lowering taxes and renegotiating fiscal targets.

The debt load is forecast to fall to 168% of GDP this year, but only under austerity measures brought in under Tsipras's Syriza party, which Mitsotakis's New Democracy party says is stifling growth.

Eurogroup chief Mario Centeno on Monday however urged the new Greek government to stick to the reforms and public spending commitments agreed by Athens with its eurozone creditors in return for the bailouts.

For the time being, the conservative victory in Greece's snap elections spells the end for Alexis Tsipras' "leftist revolution." The voters are disenchanted, argues DW's Spiros Moskovou. (08.07.2019)