Greek Interior Ministry projections showed ND with 39.8% of the vote, ahead of Syriza's 31.5%.

Outgoing Prime Minister Alexis Tsipras conceded defeat to his opponent on Sunday evening, saying "we accept the verdict of the people."

"We took difficult decisions to bring Greece where it is today and paid a heavy political price," Tsipras said, referring to his handling of the euro debt crisis. His left-wing Syriza party was voted into power with an anti-austerity mandate in 2015.

However, within a year, Tsipras watched his approval rating plummet after moving forward with a third bailout plan despite an overwhelming "No" vote during a referendum on the EU's terms.

Read more: A timeline of Greece's long road to recovery

New Democracy is led by a 51-year-old Harvard graduate, Kyriakos Mitsotakis. His party has promised to bring in investment and crack down on crime in neighborhoods of Athens known for their strong anarchist links.

In his first statement after the election, Mitsotakis vowed to bring Greeks economic growth, jobs and a better life. He called on the hundreds of thousands who emigrated during the country's financial crisis to return home.

"A painful cycle has closed," Mitsotakis said in a televised address. "I will not fail to honor your hopes."

The election result is expected to hand Mitsotakis an outright majority with 155-167 seats in the 300-seat legislative house. The exit polls showed Tsipras's party will have up to 82 seats. 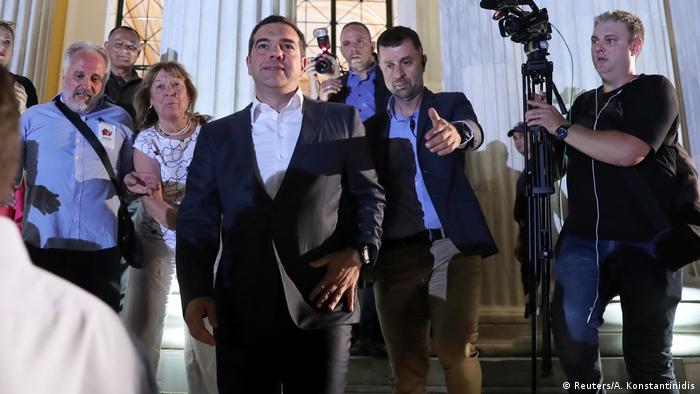 Leftist leader Alexis Tsipras, who guided Greece through one of the worst episodes of the euro debt crisis, conceded defeat

Jean-Claude Juncker congratulated Mitsotakis for his landslide election win. In a letter published on social media, the outgoing European Commission president said helping Greece get through its financial crisis was one of his commission's "proudest achievements."

The center-left Movement for Change (KINAL) was projected to win 6% to 8% of the vote and the Communists (KKE) 5% to 7%.

The far-right Golden Dawn party was among a handful of small parties with less than the 3% threshold required to enter the Greek Parliament.

Greece calls on Germany to negotiate over war reparations

The Greek government says it has asked Germany to enter negotiations regarding Athens' claim for reparations from the two world wars. Germany hasn't been willing to reopen talks, saying the issue was settled long ago. (04.06.2019)

Inside Europe: Snap elections for Greece

Inside Europe: Greece's ruling party heading for defeat in polls