Greece: Refugees, asylum-seekers struggle to integrate | Europe | News and current affairs from around the continent | DW | 08.02.2022 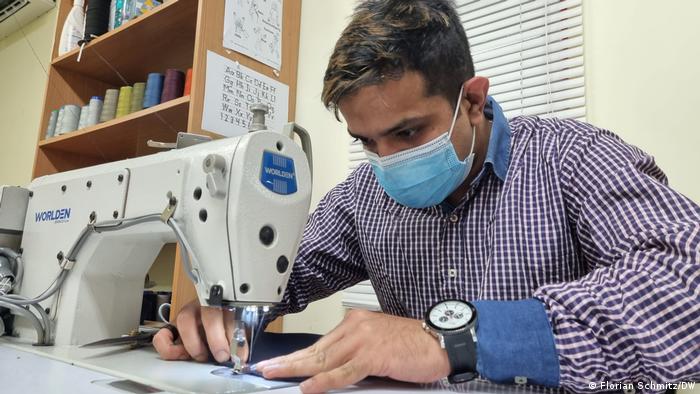 Hassan Muhammad, an 18-year-old migrant from Pakistan, has found work as a tailor in Greece

With a sure and steady hand, Hassan Muhammad passes two lengths of fabric under the needle of his electric sewing machine. He may only be 18 years old, but he knows what he's doing — he's had plenty of experience.

In his native Pakistan, he started working in a clothing factory at the age of 13 to help his family make ends meet. The first three years were unpaid, he said, because in Pakistan they count as training.

When he was 16, Muhammad worked in various textile factories for up to 16 hours a day, six days a week, for the equivalent of only around €50 ($57) a month. In addition to the economic precarity, his family also belongs to the Bengali minority, which is discriminated against in Pakistan.

"I had no rights there," said Muhammad. "I had to leave, my life was in danger."

The young man decided to flee to Greece, arriving as an unaccompanied minor refugee in November 2018. For the first three months, he lived on the streets of Athens, before finding shelter with other migrants he met. The police picked him up and he was moved from one camp to the next, but never given any papers. But he finally managed to register for asylum with the help of a Greek aid organization for minors.

A social worker got him settled in an EU-funded housing program in Thessaloniki and put him in touch with the German-Greek aid organization Naomi — where he and six other recognized refugees have been working these past six months in a textile workshop, producing sustainable fashion. Their hours are regulated, and the wages are fair.

Muhammad is grateful for the opportunity. "The Greek state has given me rights and papers. And I have this job. It makes me very happy and has solved so many of my problems," he told DW.

Integration is the exception

Naomi gives people "the opportunity to plan their lives in Greece, send their children to school and become a part of society," said Dorothee Vakalis, the German-born Naomi director. The 70-year-old Vakalis, who came to Thessaloniki in the 1970s as a Protestant pastor, is actually retired. But in view of the difficult situation for people like Hassan Muhammad, she felt the need to get involved once again.

Projects like Naomi are the exception in Greece, she said — and they are run privately, as government programs are more or less nonexistent. She is shocked by the refugee situation in her adopted country.

"I only recently learned the English word 'deterrence'," she told DW. "It's becoming increasingly clear to me that the Greek policy is to deter refugees."

The country that prides itself on its tourist hospitality is anything but a safe place for refugees. A recent report by German newsmagazine Der Spiegel and the investigative research initiative Forensic Architecture showed that Greek authorities are extremely violent when pushing back migrants at the EU country's border with Turkey, holding and beating them in secret prisons without food or access to toilets. The aim is to prevent them from even applying for asylum, an approach which is illegal under both Greek and international law.

Those who do manage to apply for asylum hardly fare any better. In a critical open letter published at the end of October, 27 human rights organizations pointed out that about 60% of the residents of EU-financed refugee camps in Greece no longer had access to financial or material assistance. This included applicants whose asylum applications had been rejected, as well as recognized refugees.

Under a March 2020 law, the latter are not entitled to any kind of support in Greece, and that includes housing facilities for asylum-seekers. Many decide to travel on to Western Europe where they file a second asylum application, which is actually illegal. Due to the disastrous conditions in Greece, however, several German courts last year dismissed efforts to send refugees back there.

Mobile Info Team, an aid organization based in Thessaloniki, has harshly criticized Athens' refugee policy, saying it makes it impossible for many migrants to apply for asylum.

As a first step in the application process, asylum-seekers have been asked to communicate with the asylum authority via Skype — where it can take up to 14 months to get an appointment with a case worker and obtain the right to assistance.

On November 22, the Greek Migration Ministry abolished that procedure, but without informing the aid organizations of the change. As a result, asylum-seekers on the mainland can only register at a reception and identification center in Fylakio, near the border with Turkey.

Corinne Linnecar, an advocacy manager with Mobile Info Team, said the location is difficult or impossible to reach for most refugees. She suspects the government isn't really interested in accessibility.

"The new system, when it is operational, will force people into reception and identification centers, cutting people off from the Greek populace and taking away people's ability to integrate themselves into their new communities," she told DW.

Heading to Belarus in hope of a better life

Fear and hopelessness are driving thousands of Iraqis toward Europe via Belarus. But the journey is fraught with difficulties — starting with the cost.