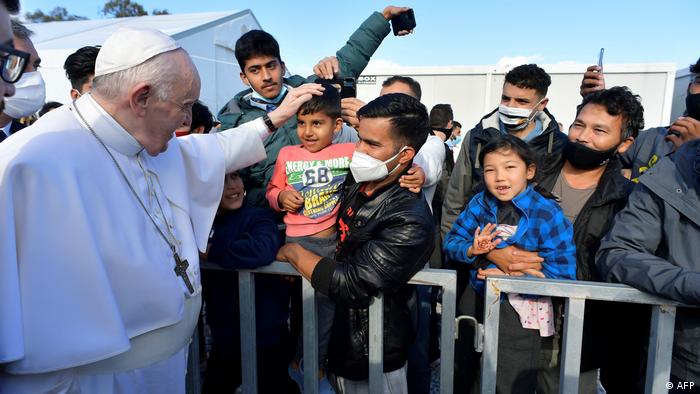 Pope Francis made a return visit to Lesbos, six years after his first trip at the height of the migrant crisis

Pope Francis returned Sunday to Lesbos, the Greek island at the heart of a huge wave of migration into Europe six years ago.

More than 1 million people, many fleeing wars in Iraq and Syria, crossed from Turkey into Greece during 2015 and 2016, with Lesbos the busiest Greek crossing point.

"I am here to see your faces and look into your eyes. Eyes full of fear and expectancy, eyes that have seen violence and poverty, eyes streaked by too many tears," Francis said.

The pope is on a 5-day visit to Cyprus and Greece, where much of the focus has been on migration.

Francis: 'Stop this shipwreck of civilization'

During the fourth day, the 84-year-old pope visited a new holding center for migrants and asylum-seekers on Lesbos and presided over a brief prayer service.

He took aim at those who use migrants and asylum-seekers for political ends.

"The remote causes should be attacked, not the poor people who pay the consequences and are even used for political propaganda," he said.

"Please, let us stop this shipwreck of civilization'' Francis urged. 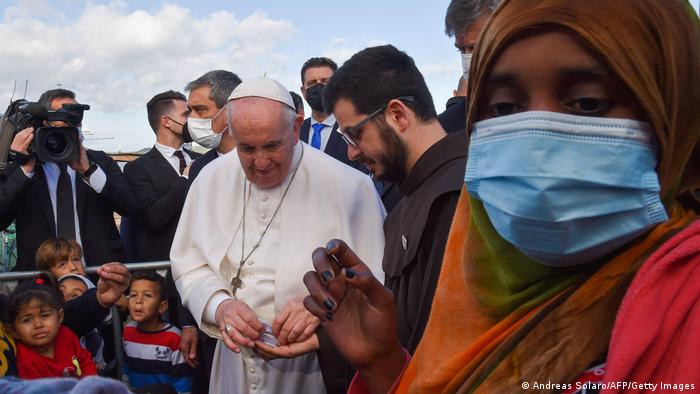 The Mavrovouni center, where nearly 2,200 asylum seekers currently live, was erected after the sprawling camp of Moria, Europe's largest such site at the time, burned down last year.

A gesture of solidarity

The pope took his time meeting asylum-seekers at the camp, who greeted him with shouts of "welcome" and "we love you." Francis stopped to pat children on the head, ask their names and pose for selfies.

DW correspondent Max Zander reported that Francis was welcomed with a song upon his arrival at the camp.

Officials did not rule out the possibility that some migrants from Mavrovouni could accompany him back to Italy.

On his previous visit in 2016, Francis brought back 12 Syrian Muslim refugees with him aboard the
papal plane.

Fifty migrants on Cyprus, including two Cameroonians stuck for months in the divided island's buffer zone, are to be relocated to Italy thanks to Francis.

After returning to Athens, Pope Francis counseled respect for the "small and lowly."

"Redemption did not begin in Jerusalem, Athens or Rome but in the desert," he told the crowd while holding mass at the Megaron Athens Concert Hall.

"God turns his gaze to wherever sadness and loneliness abound," Pope Francis said.

The pope has long championed refugees and during a speech in Cyprus on Friday, he denounced the "culture of indifference" shown to them.

In Athens on Saturday, he called them the "protagonists of a terrible modern Odyssey," referring to the ancient Greek epic poem. He urged European governments to take in migrants "in proportion to each country's means."

"Europe continues to stall, falling prey to forms of nationalistic self-interest rather than being an engine of solidarity. At times, it appears faltering and uncoordinated,'' Francis said.

"In the past, ideological conflicts prevented the building of bridges between eastern and western Europe. Today the issue of migration has led to breaches between south and north as well.''

What has changed in Greece?

With EU funds, Greece is building a series of "closed" facilities on Greek islands with barbed wire fencing, surveillance cameras, X-ray scanners and magnetic gates that are closed at night.

Three such camps have opened on the islands of Samos, Leros and Kos, with Lesbos and Chios to follow next year.

NGOs and aid groups have raised concerns about the new facilities, arguing that people's movements should not be restricted.

"Under international and EU law, asylum-seekers should only be detained as a matter of last resort," Amnesty International said in a recent update. "As we feared, Greek authorities are hiding behind the legally ambiguous concept of so-called closed-controlled centers to illegally deprive asylum-seekers of their liberty."

Rights groups have also accused Greek border officers of illegal pushbacks of migrants, where boats are prevented from landing on Greek shores or migrants returned at the border.

Greece has recently built a steel wall along a section of the Greek-Turkish land border and is intercepting boats transporting migrants from Turkey.

But Athens vehemently denies claims it is carrying out summary deportations of migrants reaching Greek territory, while human rights groups say numerous such pushbacks have occurred.

Francis was due to fly back to Athens later Sunday to hold a mass for some 2,500 people at the Megaron Athens Concert Hall.

In Greece, the trial of 24 activists accused of helping refugees reach Europe by boat has started. Among other things, they are charged with human trafficking and espionage. If found guilty, they face 25 years in prison.