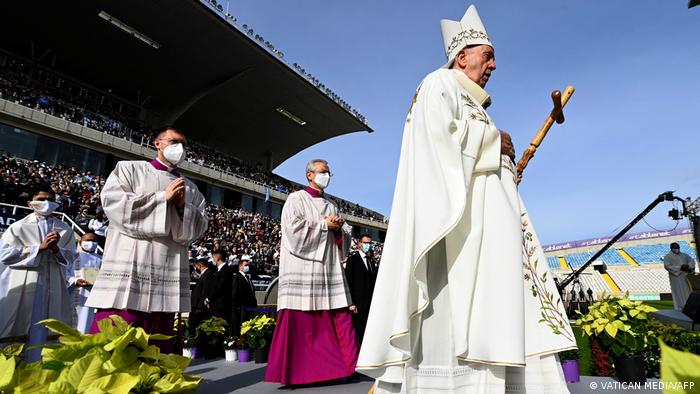 Pope Francis celebrated mass at an open-air event in Nicosia

Pope Francis met dozens of migrants who have sought refuge in Cyprus and prayed with them on Friday, the second day of his visit to the Mediterranean island.

At a prayer service at the Church of the Holy Cross in the capital, Nicosia, the pope offered 50 migrants and refugees the chance to move to Italy in a gesture of solidarity.

The Cyprus Mail reported that among those migrants meeting the pope were two Cameroon students that had been stuck for the past six months in the UN buffer zone that splits the island.

Ten of the migrants are being held in prison for being in Cyprus without permits, the newspaper said.

During the ceremony, one migrant from Iraq described how they were "pushed into a truck, hidden in the trunk of cars" and have "traveled in a leaking ship" to get to the island.

In 2020, Cyprus received the most asylum applications in the EU relative to its population size, according to EU statistics.

The island EU state's migrant camps are overcrowded and the country now receives the highest number of first-time asylum seekers of any EU state.

Earlier in the day, the pope spoke at an open-air Mass in Nicosia to a 10,000 strong crowd, which included many foreign workers from the Philippines and South Asia.

He called for a "sense of fraternity" in the Mediterranean island that is divided between the Turkish-occupied north and the territory controlled by Greek-dominated Republic of Cyprus.

"If we remained divided, if each person thinks only of himself or herself, or his or her group, if we refuse to stick together, if we do not dialogue and walk together, we will never be completely healed of our blindness," France said.

Migration has been a key focus of Francis' visit, which has been a renewed source of tension between the two administrations on the island.

The majority-Greek-speaking south has accused the north of sending migrants across the UN-patrolled Green Line that divides the country.

Cyprus: the tent in no man's land

Many of the worshipers at the Mass were Filipinos who work in Cyprus, mostly as housekeepers.

Among the crowd were people waving the flags of nearby Lebanon, the Philippines and the pope's native Argentina.

Francis eschewed his usual popemobile roundabout to greet the faithful, presumably because the crowd only filled one set of stands in the 22,000-seater stadium.

Police said a 43-year-old man was arrested after a security check at the stadium when a knife was found in his possession. A police spokesperson said it was believed the knife "had nothing to do with the pope" and was for personal use.

The pope's Mass was not affected by the incident.

First thing Friday, Francis met with the leader of Cyprus' Greek Orthodox Church and lamented centuries of hostility and prejudice that have divided Catholics and Orthodox followers.

He pointed to works of charity as a means to help heal the rift between Catholic West and Orthodox East.

On Cyprus, the relationship between the few Catholics and the majority of Orthodox believers is cordial.

The pope was then invited to the brand new Orthodox Cathedral of St. Barnabas for an encounter with the Holy Synod, the highest decision-making body of the Greek Orthodox Church.

Cyprus has been divided along ethnic lines since 1974 when Turkey invaded following a coup aimed at uniting the island with Greece.

After the split, 170,000 Christians fled the breakaway Turkish Cypriot north, where churches, monasteries and other Christian monuments have been destroyed.

Countless mediation attempts on Cyprus have failed and the peace process stalled in 2017 when talks collapsed. Tens of thousands of Greek and Turkish Cypriots remain internally displaced.

During his visit, Francis urged Greek Cypriots and Turkish Cypriots to resume talks, saying threats and shows of force only prolong the "terrible laceration" the island's people have endured for nearly a half-century. The religious leader is set to travel to Greece on Saturday.