Around a third of the migrants in the new Samos camp will stay in 240 small houses, the rest will live in large halls

Greece on Saturday inaugurated its first 'closed' holding camp for migrants and refugees, on the island of Samos, close to Turkey.

The camp is the first of five new facilities planned to improve the living conditions of asylum seekers, who have complained about overcrowding and squalid conditions.

The new camp is installed with barbed-wire fencing, surveillance cameras, x-ray scanners and magnetic doors, prompting migrant groups to complain it looks like a prison.

The facility also boasts sports and games areas, as well as shared kitchens, showers and toilets.

According to Greek media, people are allowed to leave the camp between 8 a.m. and 8 p.m. every day — except for those whose asylum applications have been rejected.

About 450 asylum-seekers out of 7,500 who lived at another camp are due to move on Monday to the new facility, which was financed with European Union funds. 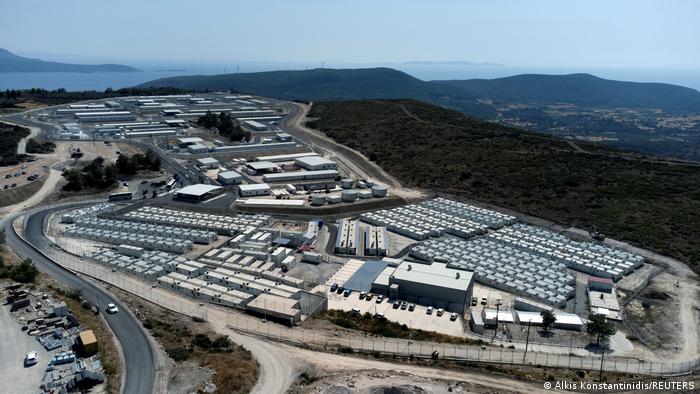 The new facility cost about €43 million and will house up to 3,000 people

"We have created a modern and safe new closed, controlled access center ... that will give back the lost dignity to people seeking international protection," Greek Migration Minister Notis Mitarachi said of the new camp.

But some 45 NGOs and civil society groups urged the EU and Greek government to abandon plans to restrict the movement of people in the facilities.

A 'rejection of refugees'

Among them was Medecins Sans Frontieres, who hit out at the "military-grade barbed wire fences and advanced surveillance systems" that the aid agency said had cost millions of euros.

"All of this to detain people whose only 'crime' is seeking safety and stability. In addition to the mass rejections of asylum applications, this new center is another symbol of the complete rejection of refugees and of their right to seek asylum."

The EU's migration crisis through the eyes of a coroner

Greece was on the front line of Europe's migration crisis in 2015 and 2016 when a million refugees from the Middle East and Africa arrived, mainly via Turkey.

The number of arrivals has fallen since then, but the Taliban takeover of Afghanistan has fuelled fears of a new wave.

Prime Minister Kyriakos Mitsotakis has vowed to halt the influx long before it reaches Greece.

The conservative government that took power in 2019 has toughened its stance by deporting more migrants, relocating refugees to the mainland and building a 40 kilometer (25 mile) fence in the Evros region on the border with Turkey.

The EU has committed €276 million ($326 million) for the new camps on Greece's five Aegean islands — Leros, Lesbos, Kos, Chios as well Samos — that receive most of the migrant arrivals by sea.

The Leros camp is expected to be finished next month, while on Lesbos — home to Moria, Europe's largest camp, which was destroyed by fire last year — work has yet to begin.