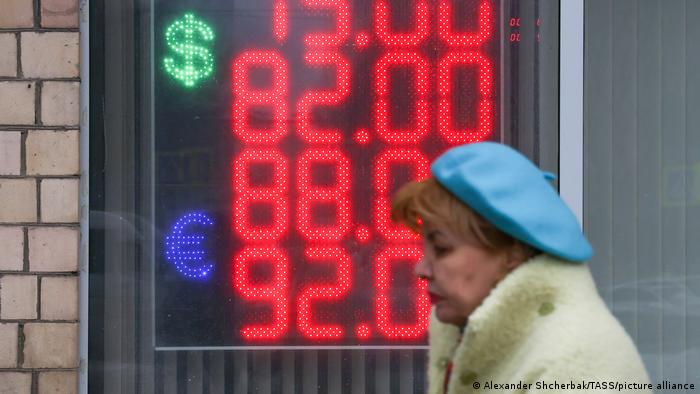 Global share markets tumbled while oil, gas and gold prices soared on Tuesday as investors weighed in on the possibility of a full-blown conflict after Russian President Vladimir Putin ordered troops into eastern Ukraine.

Russian assets were among the worst performers globally with the country's benchmark MOEX equity index falling 11%, the steepest drop since the annexation of Crimea by Russia in 2014. The Russian ruble tanked to a near two-year low of 80.30 per dollar, eventually regaining some lost ground after the Russian central bank said it was ready to step in to support financial stability.

The market mayhem comes as US and Western allies prepare to impose sanctions against Russia after Putin on Monday recognized two separatist regions in eastern Ukraine as independent states and ordered to dispatch "peacekeeping forces" to the region.

"I've just been very surprised that the markets have taken so long to wake up to the reality. They've been in denial about conflict risk," Timothy Ash, an emerging market strategist from BlueBay Asset Management, told DW. "This is the biggest security crisis in Europe since the Second World War. The markets should realize that."

The US has been warning of an imminent invasion of Ukraine by Russia, which has been amassing its troops on the Ukrainian border for weeks. Moscow has denied US assertions.

Oil prices flirt with $100 per barrel

The latest escalation saw oil prices make a dash at the $100 a barrel mark, with global benchmark Brent crude oil climbing more than 3% to $98.92 per barrel. Natural gas prices climbed by more than 13%.

The geopolitical boost for oil comes on top of an ongoing rally caused by a supply deficit as major oil producers, including Russia, struggle to boost production to meet robust post-pandemic demand. Higher oil prices have been giving headaches to policymakers battling inflation in the US and Europe.

"Crude prices were already on an escalator ride higher before Russia-Ukraine tensions helped make an already tight oil market even tighter. Oil prices will have a little bit of a tough time breaking above higher if the headlines continue to be upbeat over a revival of the Iran nuclear deal," Edward Moya, senior market analyst at OANDA trading group, told DW. "Oil prices will probably reach the $100 level, but optimism of an Iran nuclear deal and prospects of more crude from OPEC+ could keep prices stuck around the low $90s."

Oil experts say the war between Russia and Ukraine would disrupt natural gas supplies to Europe, causing prices to rise dramatically. This in return would send oil prices soaring as utilities switch to oil to generate power. They do not see the conflict having any direct impact on oil production in Russia.

Tensions over Ukraine have been a big factor in driving up energy prices across Europe in recent months, including in Germany, which is particularly dependent on Russian natural gas.

German Chancellor Olaf Scholz on Tuesday ordered a halt to the review process for the Nord Stream 2 pipeline project with Russia.

Gold benefited from its safe haven reputation as investors dumped risky assets. Gold prices, which have rallied this month despite expectations of a US Federal Reserve rate hike, rose further following Putin's announcement to trade above $1,900 an ounce, their highest level since the height of the pandemic in 2020.

Aluminum prices surged to a more than 13-year high amid fears of supply disruption from Russia, a major producer. The prices of the metal had already been on a tear due to growing demand and production issues.

The United States and its allies are coordinating a new sanctions package against Russia, which has been under Western sanctions since its annexation of Crimea.

"[The sanctions] are expected to still be at the very light end of the scale, in part so that more severe measures could be held back to deter Russia from moving troops beyond the Donbas region to the rest of Ukraine," Neil Shearing, chief economist at Capital Economics, said in a note to clients.

Any impact of the latest escalation on the Russian economy would depend largely on the severity of the sanctions. The economy, however, is in much better shape than at the time of the Crimea crisis, when Western sanctions severely hurt Russian economic output and caused a financial crisis.

"While a lot of bad news is now priced into Russian financial markets, this doesn't appear to be the case elsewhere," Shearing said. "Most of the sell-off in global equities this year can be attributed to the hawkish shift by the world's major central banks. This suggests that there is still significant downside for global stock markets if the conflict escalates."