German Chancellor Olaf Scholz has said the gas pipeline project cannot go ahead now in these crisis circumstances. He said the approval process has been halted. 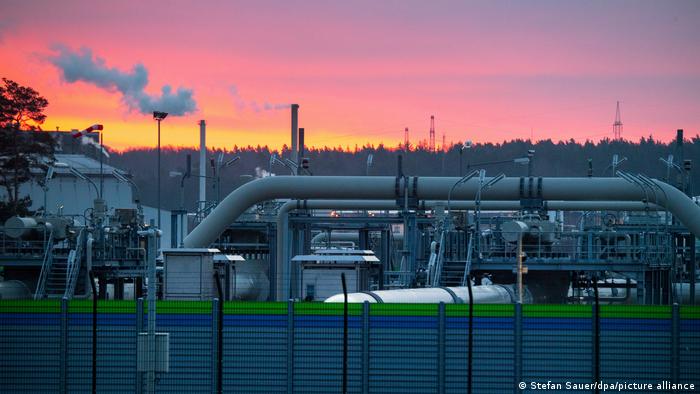 He told reporters in Berlin that his government was taking the measure in response to Russia's actions in Ukraine.

"That sounds technical, but it is the necessary administrative step so there can be no certification of the pipeline and without this certification, Nord Stream 2 cannot begin operating," Scholz said.

The White House has welcomed Scholz's announcement and said it would be following up with measures of its own.

If Russia invades Ukraine, Nord Stream 2 'is just not going to happen': Biden

Speaking at a joint press conference with Irish Prime Minister Micheal Martin, Scholz said Moscow needed to be held to account for its actions.

"Now it is down to the international community to respond to this unilateral, unjustified and incomprehensible action taken by the Russian president. We need to coordinate our approach … in order to send a clear signal to Moscow that activities of this kind cannot remain without consequences."

Scholz said Germany's energy needs would need to be reassessed by the relevant government authority.

"The department of the German ministry of economics will reassess the security of our supply needs in light of what has taken place."

The German chancellor continued to push diplomacy as a way of averting what he called a "disaster."

"In this phase it is important, apart from initial sanctions, to prevent a further escalation and with it a disaster. All of our diplomatic efforts will be aimed at achieving this."

White House press secretary Jen Psaki said that the US had been in close consultation with Germany and welcomed the move.

"POTUS made clear that if Russia invaded Ukraine, we would act with Germany to ensure Nord Stream 2 does not move forward. We have been in close consultations with Germany overnight and welcome their announcement. We will be following up with our own measures today," Psaki posted on Twitter.

"This is a morally, politically and practically correct step in the current circumstances," the minister tweeted. "True leadership means tough decisions in difficult times. Germany's move proves just that."

Poland's deputy prime minister, Jaroslaw Kaczinski, said the measures didn't go far enough. "This is better than nothing but far too little, one shouldn't keep supplying funds to an aggressive state," Kaczinski told members of the media on Tuesday.

Russia's former president and deputy chair of Russia's Security Council, Dmitry Medvedev, said the decision would come at a cost to Europeans.

"Oh well. Welcome to a new world where Europeans will soon be paying 2000 euros per cubic meter of gas!" Medvedev tweeted.

Germany will also 'hurt' due to the suspension of the pipeline

Ralf Stegner, who sits on the German parliament's Foreign Affairs Committee, said the decision will impact Germany too.

"It is part of the sanctions that were agreed upon with our allies, and the aim is to urge the Russian side and to let them think over what they did yesterday and come back to the diplomatic table and respect international law — that doesn't go without getting hurt ourselves," he told DW.

Reinhard Bütikofer, a foreign policy expert with the Green Party and a member of the European Parliament, called the move a clear "turning point" in Germany's relationship with Russia.

"I do still hope that other countries will take an example from the decision that Berlin has just taken," he told DW.  "Germany is now willing to effectively reduce our gas dependency on Russia, and that's a momentous change,"  Bütikofer said.

Why is the Nord Stream 2 gas pipeline contentious?

Construction of the pipeline project has been completed, but the project still needed regulatory certification from German authorities before the gas could be delivered.

The pipeline has been a source of contention with the US, which has expressed concern that it increases European dependence on Russia for its energy needs.

Earlier this month US President Joe Biden said there would be no chance of the project going ahead if Russian tanks and troops crossed the Ukraine border.

Nord Stream 2 would double the amount of gas flowing from Russia to Germany and would bypass Ukraine, owing to it running along the bed of the Baltic Sea.