If Russia turns off the taps, could LNG help boost European energy security? | Business | Economy and finance news from a German perspective | DW | 22.02.2022

If Russia turns off the taps, could LNG help boost European energy security?

Europe's gas reserves are at their lowest in years with winter demand not yet over. As the Ukraine crisis escalates, raising fears over Russian supply, could liquefied natural gas (LNG) fill the gap? 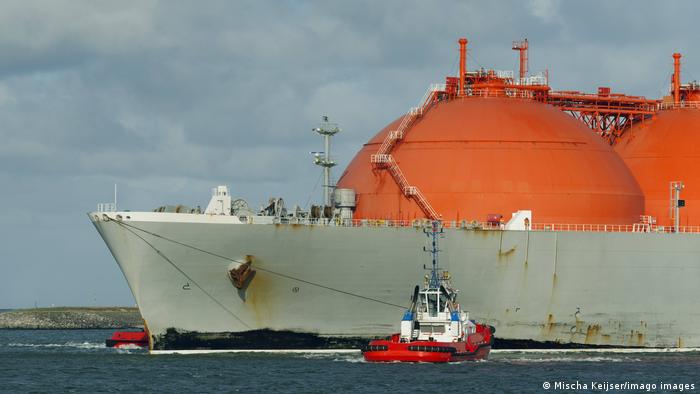 "Current inventories are about 47% of full capacity," Bernd Weidensteiner, senior economist at Commerzbank in Frankfurt, told DW back in late January. "Normal for this time of the year is about 60%...so we are significantly lower."

Indeed, a Commerzbank graphic posted to Twitter shows that, in previous years, EU inventories have ranged from 60% to more than 85% in January.

Moscow, which supplies about 40% of Europe's imported gas, is accused of using its energy exports as leverage in the ongoing Ukraine crisis, a country through which much of the Russian gas transits.

A war between Ukraine and Russia has become increasingly likely after Russian President Vladimir Putin ordered Russian forces into eastern Ukraine and formally recognized two regions in the country that are held by Russian separatists.

If Putin were to cut off natural gas supplies during a military conflict or in retaliation for any future Western sanctions, Weidensteiner warned that "some [European] inventories might run extremely low."

However, both the German government and the European Commission have recently moved to assuage such concerns.

This week, a report in Spiegel magazine said that government sources believed Germany had enough gas to get through the winter, even if Russia completely halted deliveries over the coming weeks.

Those estimates were, however, based on temperatures remaining at an average level. A prolonged cold snap over the next month could change the picture. Nevertheless, EU Commission President Ursula von der Leyen also insisted this week that Europe was covered this winter should Russia cut supply.

Some of that optimism is based on increased supplies of liquefied natural gas (LNG). To help ease demand for gas to heat and power homes and businesses, last month some 10 cargoes of LNG that were destined for Asia were diverted to Europe.

Could LNG fill the gap?

The move reignited the debate about whether LNG could be a more permanent solution to Europe's energy dependence on Russia.

LNG is a natural gas that is cooled down to liquid form and shrunk to 1/600th of its original volume. The liquid is often exported in huge ships containing heavily insulated tanks that keep the gas in a liquid state at approximately -162 Celsius. At the other end, the liquid is turned back into a gas (regasified).

The US has long warned of the threat posed by Russia's dominance in the natural gas sector, partly in an attempt to boost its LNG exports to Europe. Thanks to the shale gas boom of the past decade, the US is now the world's largest exporter of LNG.

But, while American energy firms are ramping up LNG export capacity by almost 20%, to 13.9 billion cubic feet per day by the end of the year, according to the International Energy Agency, the new supply may not be enough to bail out Europe if Putin turns off the taps.

In the short term, "LNG would not be able to fully compensate [for any natural gas shortfall from Russia]," Weidensteiner said, citing "a lack of free short-term capacity among exporters like the US and Qatar."

The Commerzbank economist said that, though Europe still has the capacity to process or regasify the imported liquid gas, "it would be difficult to deliver it to end-users as the distribution infrastructure is not tailored for a significant shift to LNG."

In another sign of Europe's energy vulnerability, the US government held talks recently with several international energy firms to discuss contingency plans for delivering gas to Europe if Russian supplies were disrupted, Reuters news agency reported on Saturday.

Citing two US officials and industry sources, Reuters said US State Department officials had approached the companies to ask where additional supplies might come from if needed.

With global supplies tight at present, the officials were told that there is little gas available to substitute large volumes from Russia, the industry sources said.

Without other natural gas or LNG exporters stepping up, Europe may struggle to compensate for any temporary lack of Russian supplies in a worst-case scenario, Weidensteiner warned.

Fall back on coal?

"You can ramp up coal power stations instead, but the environmentalists will not like that," Weidensteiner said. "But that really is the only possibility in the short term." Nord Stream 2 was meant to be completed in 2019, but the threat of US sanctions delayed construction

Putin has insisted that the opening of the new Nord Stream 2 gas pipeline from Russia to Germany would help to calm Europe's energy crunch.

The pipe, which runs under the Baltic Sea, was finished late last year but has yet to receive its operating license from Germany. Reacting to Russia moving troops into Donetsk and Luhansk in eastern Ukraine on 22 February, German Chancellor Olaf Scholz announced his government's decision to halt approval procedures for the Nord Stream 2 pipeline.

Nord Stream 2 faces resistance from the US and several European countries including Poland and Ukraine, which say it will further increase Russia's leverage over the continent and reduce transit fees earned by Ukraine for gas to pass through existing pipelines.

Weidensteiner insisted that an easing of the crisis isn't dependent on the opening of Nord Stream 2.

This piece was updated on February 23 to reflect recent developments on Nord Stream 2.