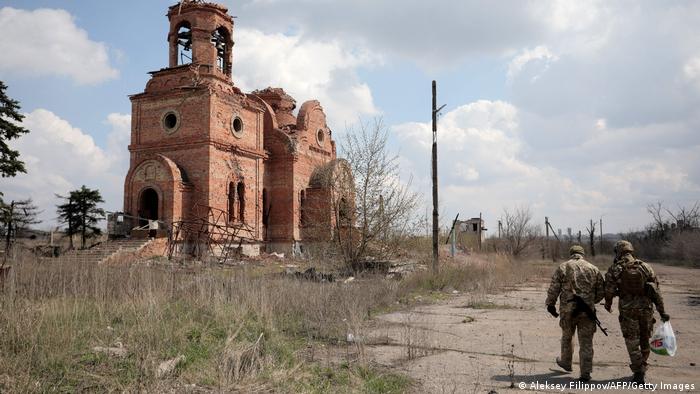 Russian President Vladimir Putin has ordered his Defense Ministry to send Russian troops into eastern Ukraine's two breakaway regions, according to a decree published early on Tuesday, after he said Moscow would recognize their independence.

The decree did not specify when any such deployment would take place.

However, the move raises tensions, as Western leaders have warned Moscow could use a skirmish in the restive region as an excuse for a larger Russian attack.

Although the eastern Ukrainian provinces of Luhansk and Donetsk are claimed in whole by pro-Russia separatists, only parts of the provinces are under their control. Both provinces belong completely to Ukraine under international law.

It is not immediately clear if the order in the decree means Russian troops will be dispatched only within the territory already controlled by the separatists.

Zelenskyy: Ukraine is 'not afraid'

Ukrainian President Volodymyr Zelenskyy delivered an address on Tuesday after urgent consultations with world leaders. He said he demanded "clear support" from the West.

Zelenskyy said that Ukraine is "not afraid of anything or anyone," after Russia's recognition of the two separatist regions.

He said that Ukraine's borders will remain as they are and that Russia's actions are "a violation of the sovereignty and territorial integrity" of Ukraine.

The Ukrainian leader accused Russia of legalizing the presence of its own troops, which he said have been in the Donbas since 2014.

He added that Ukraine supports a political and diplomatic settlement.

Ukrainian Foreign Minister Dmytro Kuleba said he would head to Washington to meet with US Secretary of State Antony Blinken after they spoke about the developments.

"I underscored the need to impose tough sanctions on Russia in response to its illegal actions," he added.

US President Joe Biden said he "condemned" President Putin's decision to recognize the "independence" of separatist regions in eastern Ukraine during a call with Ukrainian President Zelenskyy, according to the White House.

Biden is expected to issue an executive order prohibiting US investment, trade and financing with the breakaway regions, in a limited move stopping short of imposing sanctions directly on Russian entities.

"These measures are separate from and would be in addition to the swift and severe economic measures we have been preparing in coordination with allies and partners should Russia further invade Ukraine," White House spokeswoman Jen Psaki said in a statement.

The White House said that Biden has spoken with German Chancellor Olaf Scholz and French President Emmanuel Macron on how they will continue to coordinate a response.

British Prime Minister Boris Johnson's office said that he will convene a government meeting on Tuesday to coordinate the UK's response to Russia's move, "including agreeing a significant package of sanctions to be introduced immediately."

Johnson earlier told Ukraine's President Zelenskyy that regardless of Russia's actions, the UK would be "steadfast" in its full support of Ukraine's sovereignty and territorial integrity.

Johnson: 'A flagrant violation of the sovereignty of Ukraine'

"The union will react with sanctions against those involved in this illegal act," a statement from the two leaders said.

"The union reiterates its unwavering support to Ukraine's independence, sovereignty and territorial integrity within its internationally recognized borders."

US: Russian 'peacekeeping' claim is 'nonsense'

The US ambassador to the United Nations, Linda Thomas-Greenfield, told an emergency Security Council meeting Monday evening in New York that Russia's "attack" on Ukraine "is unprovoked and violates international law."

Thomas-Greenfield said Putin's claim that the troops were on a "peacekeeping" mission is "nonsense."

"He calls them peacekeepers. This is nonsense. We know what they really are," Thomas-Greenfield said.

"The consequences of Russia's actions will be dire, across Ukraine, Europe and the globe," she said.

Still, the US envoy insisted on a diplomatic path. "We continue to believe that the diplomatic table is the only place where responsible nations resolve their differences."

"The internationally recognized borders of Ukraine have been and will remain unchangeable regardless of any statements and actions by the Russian federation," Kyslytsya told the chamber.

"We are on our land and we are not afraid of anything or anyone," he added.

Russia's UN ambassador, Vassily Nebenzia, said Moscow was still "open to diplomacy," and claimed that Russia did not intend to allow "a new bloodbath in Donbas."

"Today's recognition of the separatist self-declared 'People's Republics' in eastern Ukraine... is a serious blow to all diplomatic efforts," Baerbock said Monday evening in Berlin.

"Years of efforts in the Normandy format and the OSCE [Organization for Security and Co-operation in Europe] have thus been undone willfully and without comprehensible reason," Baerbock added.

"The recognition is also a further violation of Ukraine's territorial integrity and sovereignty, which we condemn in the strongest possible terms."

NATO chief Jens Stoltenberg condemned the Kremlin's move, saying that it "further undermines Ukraine's sovereignty and territorial integrity, erodes efforts towards a resolution of the conflict, and violates the Minsk Agreements, to which Russia is a party."

"Moscow continues to fuel the conflict in eastern Ukraine by providing financial and military support to the separatists. It is also trying to stage a pretext to invade Ukraine once again."

The US also echoed NATO and Germany's concerns, with Blinken saying that Putin's decision represents a complete rejection of Russia's commitments under the Minsk agreements and contradicts Russia's "commitment to diplomacy."

In the spring of 2014, Russia seized and annexed the Crimean peninsula.

Later, pro-Russian separatists in the Donetsk and Luhansk regions of Ukraine declared the independence of two breakaway "people's republics."

Fighting has been ongoing between Ukraine and Russian-backed separatists in Donbas since 2014.

More than 13,000 people have been killed so far in the conflict, according to the UN. An additional 1.4 million Ukrainians have been internally displaced by the conflict.

A senior US official told reporters that Washington was still assessing its response to the situation, and would base a decision on further measures on the nature of Russia's troop deployments.

"Russian troops moving into Donbas would not be a new step," he said, stressing that Russian forces have been deployed covertly in the separatist regions since 2014.