Populist attitudes are on the rise in Germany, particularly from within the political center. One in three voters now sympathizes with populist policies, according to a new study by the Bertelsmann Foundation. 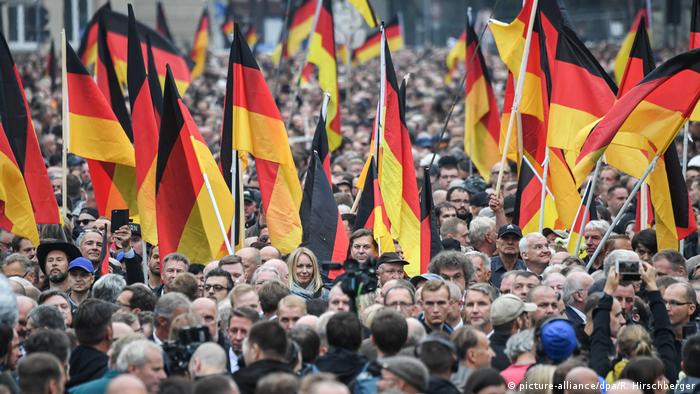 Germany's political center risks hollowing out as more voters admit  embracing populist sympathies, according to a study published Monday by the Bertelsmann Foundation, a progressive think tank, in conjunction with the Berlin Social Science Center.

The latest "Populism Barometer" found that almost every third German voter sympathizes to some degree with populist anti-establishment policies, whether on the left- or right-wing of the political spectrum.

At the same time, the number of sampled voters who identify as politically centrist has decreased by four percentage points, to just 32.8 percent.

The survey, which sampled 3,400 voters in May and August, measured populist attitudes around an individual's tendency to sympathize with three core factors: anti-establishment attitudes, anti-pluralism and the desire for more "sovereignty."

Curiously, around one in eight voters with populist sympathies still identify as part of the political center. According to the study, such a trend could benefit the far-right Alternative for Germany (AfD) party, which has leveraged its populist tendencies to mobilize traditionally centrist voters.

The survey also found that as many as 13 percent of voters who identify as part of the center refused to rule out voting for the AfD in the next election.

"Like a Trojan horse, populist policies are being deployed by the AfD to infiltrate the political center," said Vehrkamp and Merkel. "Supposedly centrist AfD voters will vote in favor of populism but will ultimately end up choosing an ideology that is actually far further right than their actual beliefs. This is because populism is a 'bare-bones ideology' has been fleshed out with far-right policies."

Ex-AfD member: 'I was met with hate'

The same can also be said, in part, of left-leaning voters, who increasingly see the socialist Left Party as an alternative to the center-left Social Democrats (SPD). The study also found that of all the parties currently in the Bundestag, the Left Party in particular has succeeded in courting more right-leaning, populist voters.

The answer is perhaps best found by looking at Chancellor Angela Merkel's conservative Union, made up of the Christian Democrats (CDU) and their Bavarian sister party, the Christian Social Union (CSU).

After suffering record losses in last year's general election, factions within the CDU/CSU have adopted a moderately more populist, anti-migrant platform. This is most apparent among the CSU, which fears it could lose its absolute majority in this month's Bavarian state election due to the AfD's rising popularity.

However, the study warns that in appealing to populist sympathizers the traditionally centrist Union risks alienating voters who identify as strictly not populist, while at the same time also failing to regain the right-wing fringes it has already lost to the AfD.

Read more: Merkel and Bavaria: What Germany's regional election means for the chancellor

"The Union is the victim of a pincer movement carried out by the civic Greens from the leftist, liberal center and the right-wing populist AfD," write Vehrkamp and Merkel. "Passively accepting, or even actively promoting, this swelling of populism within its ranks would therefore be a highly risky strategy."

Voter migration from the Union toward the environmentalist Greens has become increasingly apparent in recent polling data. In Bavaria, the Green party is expected to take around 17 percent of the vote and will likely go into coalition with the CSU. Some national polls also place the Greens in second place, ahead of the SPD and AfD, and just 11 percentage points behind the CDU/CSU.

The Bertelsmann study identifies three key policy areas that Germany's major parties could capitalize on to win back voters drawn to populist allures while also remaining faithful to their centrist core.

First, contrary to developments in other EU countries, the idea of further European integration and a stronger German role in EU politics continues to win over voters, including many populist sympathizers. Bar the AfD, all parties would stand to benefit from a pro-European platform.

"The overall picture shows that 'more Europe' presents a strong and positive opportunity to mobilize voters, particularly centrists, while avoiding a negative countermovement from the populist camp," said the study.

However, the most effective means of bridging the gap is focusing on sociopolitical issues, such as fiscal redistribution and housing. For example, the study found that greater investment in social housing would raise a party's approval rating by 15 percentage points among both the populist and non-populist camps.

"Social issues were found to be the most salient themes within a society that is becoming culturally and socially divided," said Wolfgang Merkel. "If the established parties don't tend to these social issues, then the populists will be sure to."

A top European human rights defender has urged citizens to do more to combat hate and marginalization. Council of Europe Secretary-General Thorbjorn Jagland suggests "checks and balances" against growing populism. (21.04.2017)