Germany: New ′Aufstehen′ movement of Sahra Wagenknecht is shaking up leftists | Germany | News and in-depth reporting from Berlin and beyond | DW | 11.08.2018

Only days after Left politician Sahra Wagenknecht announced her new movement, dubbed Aufstehen or Stand Up, tens of thousands have vowed support. The movement could present a leftist case for limiting migration. 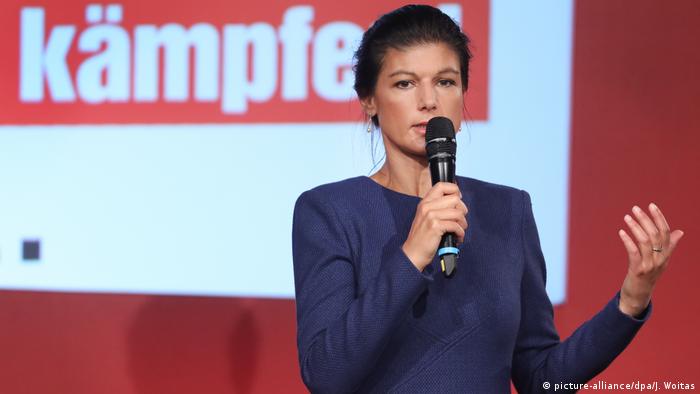 After months of floating the idea of an overarching leftist movement in Germany, the Left party's parliamentary leader, Sahra Wagenknecht, has unveiled the first stage of her Aufstehen ("Stand Up") initiative by rolling out a website that offers visitors a chance to join the movement.

According to Wagenknecht, the movement is meant to rally left-wing voters and pressure politicians to create a majority that would result in a left-wing government. It also aims to win over the "protest voters" who currently support populist parties such as the right-wing Alternative for Germany (AfD).

"This is about courage to overcome the neoliberal mainstream, about a social policy in the interest of the majority," Wagenknecht told the online portal Nachdenkenseiten.de. "The globalization steered by corporations, the disintegration of the welfare state, an endless string of new wars — this not a force of nature. There are alternatives to it and we want to give people back the hope that politics can be changed."

Aufstehen, however, is not a political party in itself, and it welcomes the members of other parties, including the Left, the SPD and the Greens, as well as people without party affiliation.

"Nobody needs to leave their organization to work with us, but we especially want to encourage those people who don't feel at home in any party to act," she told the Spiegel magazine.

Aufstehen is also not endorsed by Germany's Left party, and several senior officials have already spoken out against the movement and Wagenknecht. The 49-year-old parliamentary leader has a history of clashing with party heads.

A threat for the Left?

The Aufstehen website, which went online a week ago on Saturday, currently consists of a collage of video clips with people across Germany discussing leftist ideas. It notably does not give details on what the Aufstehen members should stand up for, and the group's manifesto is set to be published only in September.

Even so, over 50,000 had pledged their support to the movement by Thursday. Wagenknecht's husband and political ally in the Left party, Oskar Lafontaine, praised the early success of the initiative.

"We are very satisfied." he told the dpa news agency. "We didn't necessarily count on such overwhelming support."

By Friday, there was more good news for Wagenknecht's platform: A poll ordered by the Focus magazine showed that more than a third of German voters "could see themselves" voting for Aufstehen if the movement transformed into a political party. The response was overwhelmingly positive among the Left voters, where 87 percent were open to supporting her initiative at the polls. The upper section of the Aufstehen.de web page offers the visitors a chance to join the movement

The initiative prompted some leftist politicians to accuse Wagenknecht of trying to split her party or infringe on the shrinking pool of left-wing voters. Cracks between Wagenknecht and other Left party leaders have been visible for years, but the final push was likely the dispute on migration during the Left party congress in June. During the summit, Wagenknecht argued against open borders and granting migrants unlimited access to Germany's labor market.

Her position, which differs from the official party line, is that Germany needs to take in persecuted asylum seekers and war refugees, but control the influx of economic migrants.

Wagenknecht also warned that the Left party was bleeding supporters to the right-wing AfD, which calls for strict limits on migration. At least 400,000 voters have already switched sides, putting the AfD ahead of the Left in nearly all of the Left's traditional stronghold in the east.

However, she was booed and openly challenged during a session with party members and unable to secure enough support.

Teaming up with a playwright

Behind the scenes, Wagenknecht was already cooperating with notable Berlin playwright Bernd Stegemann and other notable leftist intellectuals who have criticized Germany's current refugee policy. Stegemann, another leading figure in the Aufstehen movement, reportedly inspired Wagenknecht to start the initiative with his articles on populism and political correctness. He argues that letting in migrants makes life harder for people who already need to fight for lower-paying jobs or affordable housing.

This week, Wagenknecht and Stegemann published a joint article in Nordwest-Zeitung where they argue for a "realistic" migrant policy between the populist anti-immigrant resentment and "unlimited" welcome for newcomers.

Such policy would support people who were helping integrate the refugees, but "would not let people smugglers determine which people illegally come to Europe," they said.

'They have every reason to be angry'

Wagenknecht and Stegemann also said that "fixation" on refugees was an expression of misplaced anger among poorer voters.

"People working under short-term contracts, or with too small pensions, and with children that can no longer receive a decent education because the public schools are falling apart and don't have enough teachers, they have every reason to be angry at 'those above'," they said.

"We need to make sure these voices are heard once again."

Read more: Left's Sahra Wagenknecht gets pie in the face from antifascist group at congress

The leaders of the Aufstehen movement are scheduled to present the platform's manifesto on September 4 and publish a list of 40 founding members, which is said to include many prominent intellectuals.