Sahra Wagenknecht: the uncompromising face of the Left party | Germany | News and in-depth reporting from Berlin and beyond | DW | 25.08.2017

Sahra Wagenknecht: the uncompromising face of the Left party

Sahra Wagenknecht has become one of the most recognizable faces and voices of Germany's Left party. But with her rhetoric swinging between pacifism and populism, where does the Left's top candidate really stand?

Sahra Wagenknecht has worked her way up the ranks of Germany's socialist party to become its parliamentary chairwoman and is now leading the party into the general election for the first time. The party is currently the largest opposition group in Germany's lower house of parliament, the Bundestag.

The 48-year-old's determination to make her mark on the political landscape began shortly after the fall of the Berlin Wall while she considered a life in academia.

"I had the feeling that commenting from a distance isn't enough," she told DW in a television interview in June. At the time she thought: "I want to change something. I want to influence something," but said she never imagined she would become a career politician.

Wagenknecht's rebellious streak stretches back to her childhood growing up behind the Iron Curtain. Born in the former East Germany (GDR) in the city of Jena, her father was an Iranian student and her mother worked for a state-run art distributor.

Although she tends to be sparse with personal details in interviews, Wagenknecht has said several times that she doesn't identify as having a "migrant background," emphasizing that her father never fully immigrated to Germany. According to Wagenknecht, he returned to Iran when she was a small child and was never heard from again. 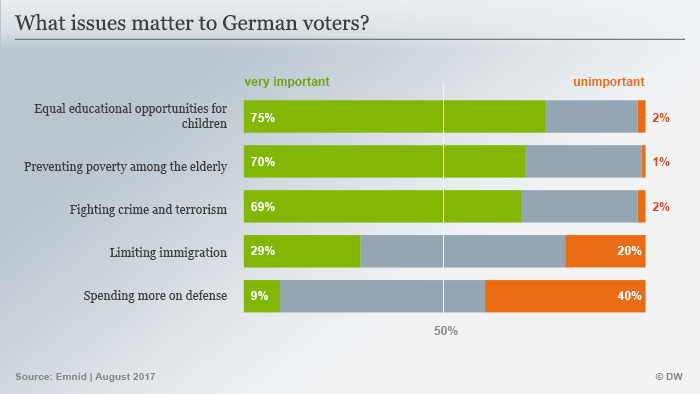 Still, her "foreign appearance" caused problems as a child growing up in East Germany, she told Zeit Magazine in March. She read communist theory and classic German literature excessively, donned a punk hairstyle and hung out in clubs with much older kids.

Despite her socialist convictions, Wagenknecht's outspoken nature got her in trouble with the old East German regime. She was actually barred from studying at university for a time after criticizing the GDR's practice of military training.

Growing up, Wagenknecht told DW she was "convinced that she was a socialist" but she said she "had the feeling that what the GDR was really about had nothing to do with these ideals."

After the fall of the Berlin Wall, the ban was lifted and she went on to study literature and philosophy. She also has a PhD in economics. In 2014, she married former Social Democrat and prominent Left party politician Oskar Lafontaine. 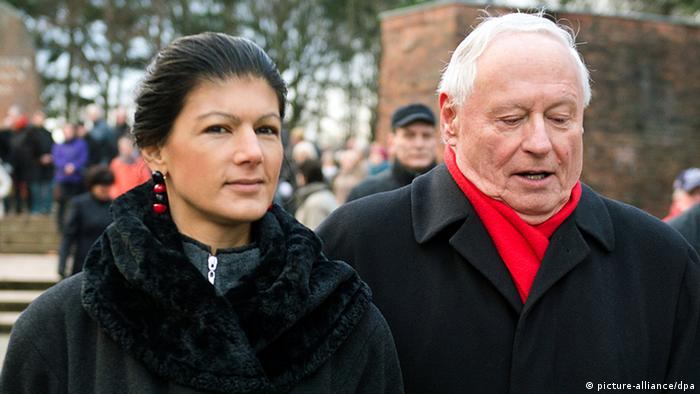 After years of speculation that they were a couple, Wagenknecht married Left party architect Oscar Lafontaine in 2014

'You can't fight terror with terror'

Today, she is considered part of the old-school wing of the party as one of the members who remains from the former East German Socialist Unity Party (SED).

For a time, she was under surveillance by Germany's domestic intelligence agency for her far-left views.

She's campaigned hard for an end to German military involvement in foreign missions and wants Germany to stop all weapons exports.

"I consider it so dishonest to say we are fighting terrorism, while at the same time cooperating with and delivering weapons to those who openly support terrorism," she told DW. "You can't fight terror with terror."

Noting the rise of the nationalist Alternative for Germany (AfD) following the influx of refugees in 2015, Wagenknecht controversially adopted similar rhetoric in an attempt to make populist causes left-wing.

"In addition to the uncontrolled border opening, there's a police force that has been downsized to the point of inefficiency," said Wagenknecht in January. That comment led to condemnation across the political spectrum, but applause from the AfD.

She's also called for a limit on refugees and made comments about asylum-seekers losing their right to asylum if they commit crimes. In its party platform, the Left party calls for all who are looking for protection in Germany to not be turned away.

The parallels with the right-wing populists have uneased many within the party, with top Left party members repeatedly distancing themselves from her remarks.

A more extreme example of left-wing disapproval with Wagenknecht's refugee stance happened last May when an anti-fascist activist threw an entire chocolate cake in her face at a Left party conference.

Weeks earlier, the same group made a similar attack - but that time it was the AfD's Beatrix von Storch with cream pie on her face.

A favorite of the German talk show circuit and the newspaper opinion page, Wagenknecht is one of the most well-known and recognized members of her party.

So when asked by reporters why she isn't campaigning to be the next chancellor, Wagenknecht said in a recent Facebook post that she "naturally wouldn't have anything against it," but knows that the party's current 10 percent polling rate isn't enough to get the Left in office. 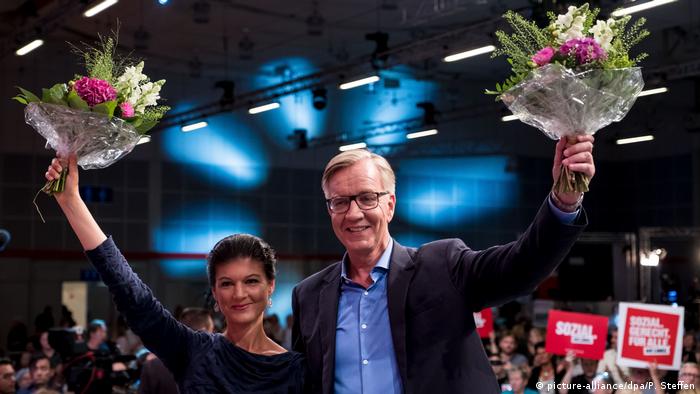 Wagenknecht represents the radical side of the Left Party, fellow top-candidate Dietmar Bartsch appeals to the moderate wing

Instead, she wants to solidify the Left's position as the largest opposition party in the Bundestag. She's all but ruled out possibly entering into an alliance with the center-left Social Democrats (SPD) and the Greens in a so-called "Red-Red-Green" coalition.

"A good opposition policy is better than a bad government policy," she said at a party conference in June to thunderous applause.

Other leading members of her party, including her co-candidate Dietmar Bartsch and Left party co-chairwoman Katja Kipping, are more open to cooperation with the SPD and Greens if it means the Left gets a chance to be in the driver's seat.

But Wagenknecht has harshly criticized compromises made by the Left in "Red-Red-Green" governments on the state level, saying the SPD and the Greens advocate for neoliberal policies.

With her precise and uncompromising attitude, Wagenknecht is determined to fight for her vision of Germany. "I think you must be able to fight for what you believe in," she told DW.