Left Party delegates have voted by a large majority to back the proposal by leaders Katja Kipping and Bernd Riexinger. It was a setback for the party's most recognizable face and voice, Sahra Wagenknecht. 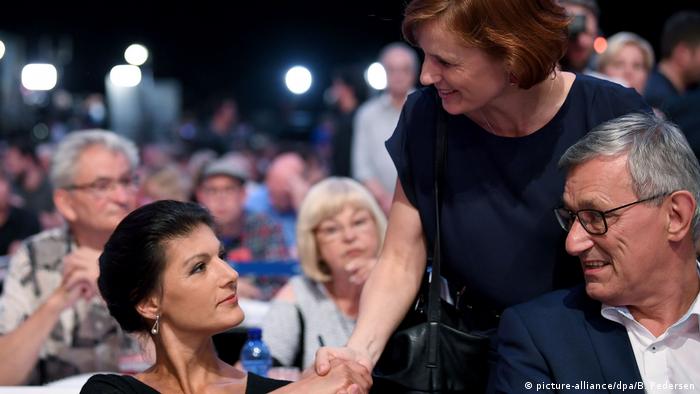 The 583 delegates of Die Linke (The Left) voted on Saturday in Leipzig in favor of the party executive's motion which included its refugee policy. The party has a formal commitment for all who are looking for protection in Germany not to be turned away.

The executive motion was based on a trio of proposals: Bringing an end to conflict, including an end to arms exports; a social program to solve housing and employment difficulties for everyone in Germany; and finally, safe and legal escape routes as well as open borders for people seeking protection.

The divisions within the party had centered on a group around leading politician Sahra Wagenknecht who warned that Die Linke was becoming unable to reach some sections of its traditional support base. She warned against the principle of open borders for all and unlimited access to the German labor market. 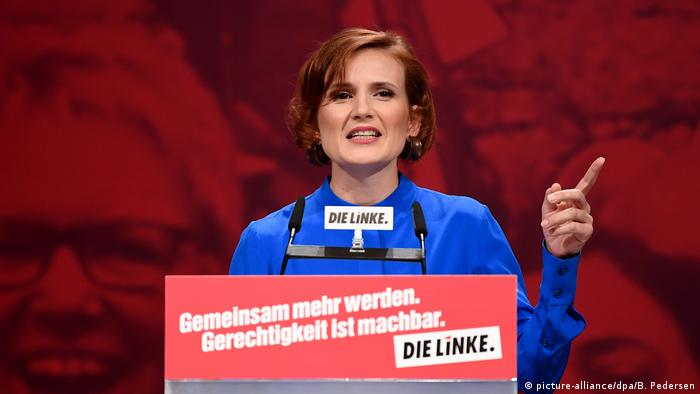 Katja Kipping at The Left's congress in Leipzig

In her address to the congress, Left leader Katja Kipping adopted a diplomatic tone apparently referring to Wagenknecht, as she said everyone should have the possibility of taking a position on issues: "Nobody has to decide on a side here, because we are all part of The Left."

Keeping to the line

However, Kipping did say there was a need to keep to a consistent line on issues. Once clarified by the party, the policy should be accepted by all. Decisions should not be questioned afterwards; that, she said, was a "question of respect for all delegates."

Kipping pointed in particular Oskar Lafontaine, Wagenknecht's husband since December 2014 and co-founder of the Left Party in 2007 after leaving the Social Democratic Party (SPD). He has also called for restrictions on immigration.

The Left leader said the party stood on the side of "deprived people on the refugee routes" and in stark "contrast to the authoritarian right."

"It would be irresponsible to underestimate this shift to the right," Kipping said. "Because it provides the breeding ground for a new fascism."

Co-leaders Kipping and Riexinger were re-elected on Saturday afternoon and given a further, two-year leadership term by delegates.

Asked if she considered the duo to be the right people for the jobs, Wagenknecht said: "There are no other candidates, so discussion is pointless."

According to official party figures, the Left Party has just under 64,000 members, which makes it the fifth largest party in Germany. In last year's elections it won 69 of 709 seats in the Bundestag after taking 9.2 percent of the vote.

Politics as a beauty contest: Do good looks win votes?

A political candidate's attractiveness can prove decisive in an election, a study shows. Academics in Düsseldorf found that "attractive" candidates could expect a lead of more than five percent over "uglier" rivals. (10.01.2018)