In a wide-ranging interview with DW, Foreign Minister Heiko Maas urged India and China to "de-escalate" their deadly border spat. He also said NATO would endure despite Trump's plan to trim US troop numbers in Germany. 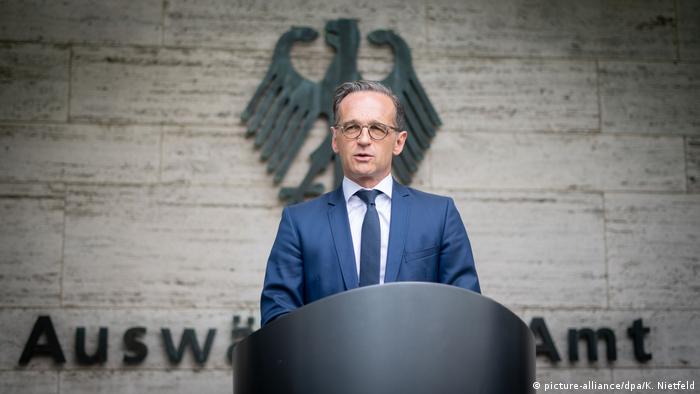 German Foreign Minister Heiko Maas on Wednesday called on both China and India to de-escalate tensions and peacefully resolve their Himalayan border dispute. "These are two large countries and I don't want to begin to think about the conflict that could happen if this results in a real military escalation," Maas told DW. "That's why we are trying at all levels on both sides to bring about deescalation."

Maas said Germany was unlikely to directly involve itself, but added that it was using its influence to dissuade a military clash.

"I don't think that Germany needs to get involved everywhere as a mediator. But we are sitting on the UN Security Council and we will take on the presidency in July," he said. "I believe the expectation in the international community is that countries like India and China should not get embroiled in a conflict that would not only affect those two nations, but also the entire region.

"And that's why we are doing what we can to influence both sides with the clear message to deescalate this conflict and avoid a further escalation, especially a military one."

Over the past few weeks, Chinese and Indian troops have been locked in aggressive posturing at multiple locations along the two nations' de facto border, known as Line of Actual Control (LAC), raising tensions between the two nuclear-armed neighbors.

While a skirmish this week left 20 Indian soldiers dead, China has refused to confirm if it suffered any casualties. The incident, the first deadly clash at the border in decades, dominated Indian news channels and inflamed social media in both countries.

Germany is due to take over the rotating presidency of the European Council from July 2020. When asked about Germany's plans for the EU, Maas said Berlin wanted to make sure that member states severely hit by the coronavirus pandemic were "helped to recover quickly."

"A large export nation like Germany profits when people prosper in Europe. That's why we want to make sure the countries that have been hit hard by the coronavirus, like Italy and Spain, will be helped to recover quickly from the crisis," the minister said, adding: "That's not only good for those countries and Europe. It's also good for Germany."

During its presidency in the second half of the year, Germany would also seek to rein in conflicts "between north and south" in the 27-nation bloc, Maas said. "We want to find a solution to that. We've made a proposal with France, and I believe it will be the basis for consensus within the European Union."

When asked about the intra-EU disagreements between "east and west," Maas said countries in Central and Eastern Europe such as Poland and Baltic nations, had "different political and security concerns" compared to Western Europe. "So yes, Germany can be a bridge in Europe between east and west," said Maas in support of a strategy to dispel "any impression that they're second-class members."

Regarding two EU rule-of-law proceedings against Hungary and Poland, Maas said these would be on the six-month German presidency agenda. "The rule of law is one of our core values and must not become a point of contention in the European Union," he asserted.

Maas also touched on the subject of NATO and the state of trans-Atlantic ties. US President Donald Trump on Monday announced a major reduction in American troop strength in Germany, from around 34,500 personnel down to 25,000.

Germany, Trump said, is not meeting its commitment to spend 2% of its Gross Domestic Product (GDP) on defense as required by the NATO alliance. Member nations had pledged to reach the 2% threshold by 2024. Germany has said it hopes to reach the target by 2031.

Trump has long complained that host nations have not been paying their fair share for the US troops and has repeatedly singled out Germany as a major offender. Until Berlin meets the spending target, he said, the US will reduce its deployment in the country.

Trump's move to reduce US troop numbers in Germany would not leave Europe managing on its own, Maas said. He stressed that Europeans and Americans are united by shared values, namely liberal democracy and freedom, "even if relations are complicated at the moment."

It was in the United States' interest to remain closely tied to Europe in terms of foreign and security policy, Maas said, but conceded that "maybe the US will not be the protective shield that it once was for Europe."

"That will lead to us having to do more for our own security," he underlined, adding that Europe was "having that discussion" but not to the extent of uncoupling security. "I don't want Europe to become militarily independent. I want us to realize our security interests as an ally in NATO — with the United States," Maas said.

"We've already taken on a lot of responsibilities, in Africa, for example, both Europe, and Germany and France," he said, referring to Sahel nations such as Mali. Germany was also playing a role in the "intra-Afghan peace process," said Maas. "It's always about security, but also diplomacy… because in the end, wars need peace treaties and they need political and not military solutions," he stressed.

Germany wants to mediate between US and China during EU presidency

Germany does not want trade tensions between the US and China to become "irreconcilable," Foreign Minister Heiko Maas has said. Germany assumes the European Union’s rotating presidency next month. (01.06.2020)