How Chinese and Indian media reacted to border clashes | Asia | An in-depth look at news from across the continent | DW | 17.06.2020

Indian newspapers and Chinese state media are demanding a continuation of dialogue after a bloody incident on the border. From an Indian perspective, however, New Delhi must "wake up" and assess Beijing's push for power. 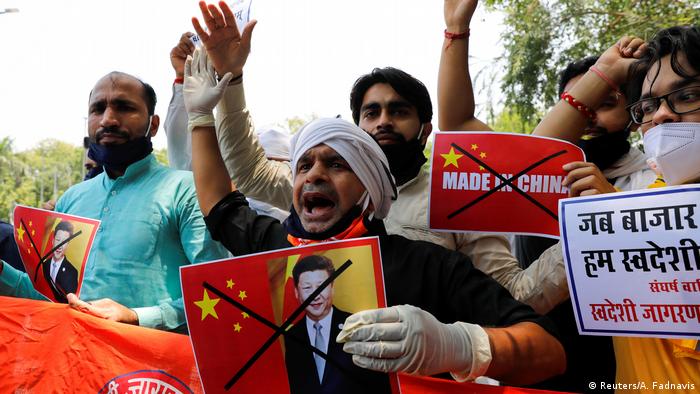 The Times of India newspaper considers it conceivable that "Chinese aggression" could be a warning to India against joining the "absolutely legitimate" international demand for an independent investigation into the origins of the coronavirus outbreak.

"If Beijing succeeds in getting India to kowtow to China's diplomatic positions, this would also be a strong signal to the other neighboring countries about who is to decide what in Asia. Therefore, India should do exactly what China does not want it to do, and react with diplomatic countermeasures."

In this context, the commentator recommends sharp criticism of the "end” of Hong Kong's economy, China's human rights violations in Tibet and Xinjiang, and improving relations with Taipei.

"We should also pay China back in kind and use trade as a weapon by imposing sanctions on Chinese imports. Beijing can't kill our soldiers on the Line of Actual Control while benefiting from our huge market."

The Indian Express wrote, "The brutal killing of 20 Indian soldiers by the Chinese army has the potential to undermine the military detente agreed upon only a few days ago between senior officers on both sides." The writer also referred to the mutual accusation, that the other side had violated the consensus that they had both reached.

"Without a doubt, much is lost in the process of translation. At the same time, Chinese adventurism violates the agreement reached at several meetings between Xi Jinping and Narendra Modi. New Delhi should activate all political and military communication channels with Beijing to make this point clear."

Read more: How realistic is India's 'Made in China' boycott campaign?

The paper also claimed that many politicians in New Delhi have been lulled into a false sense of security by earlier diplomatic successes in border disputes with China between 2013 and 2017.

The Indian government can no longer ignore the "fundamental change in China's world view, according to which Beijing can take on anyone … India can no longer afford its political illusions about China."

'The only proper way of dialogue'

On Tuesday, the Jiefang Junbao (Newspaper of the People's Liberation Army) described Monday's bloody border incident as follows: "On the evening of June 15, the Indian army in the Galwan River valley along the Chinese-Indian border again carried out illegal activities across the Line of Actual Control, contrary to its obligations. They deliberately provoked an attack. The fights resulted in deaths and injuries."

The article then calls for "India to maintain strict control of its border forces, immediately cease all border violations and provocative actions and return to the right path of dialogue and talks to resolve differences."

While India has acknowledged that at least 20 of its own soldiers were killed in the clash, and those "injured or killed on the Chinese side," China has made no mention of either Chinese or Indian victims.

"China does not want people in the two countries to compare the death toll, which would further fuel an already-irritable mood. It's a friendly gesture from China," wrote Hu Xijin, the chief editor of the nationalist daily Global Times in the Chinese-language edition of the paper.

He also appealed to readers not to rely on "rumors about the number of fatalities from abroad."

"We trust our government and the People's Liberation Army, and their de-escalation strategy in border conflicts."

On Wednesday, Chinese state television showed photos of a military maneuver on the plateau of Tibet. The speaker said, "Recently, a brigade of the People's Liberation Army stationed in Tibet conducted a three-dimensional exercise with live ammunition on the southern side of the Nyenchen Tanglha Mountains, 4700 meters above sea level. According to the description, the maneuver took place close to the Indian border."