China called on India to "harshly" punish those responsible for deadly border clashes, but Narendra Modi said his soldiers should be proud. Germany has called on the two sides to deescalate. 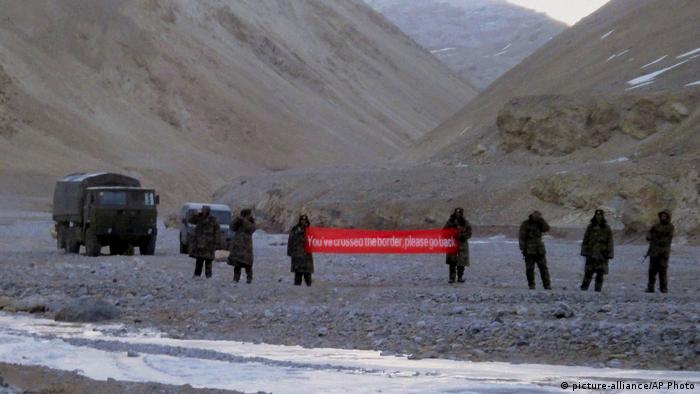 China's foreign minister blamed India for the border violence that claimed the lives of at least 20 Indian soldiers this week.

"The Indian side would best not make an incorrect judgement of the situation, would best not underestimate China's strong determination to safety its sovereign territory," China's top diplomat Wang Yi said in a statement on Thursday.

He said that Indian troops crossed the so-called Line of Actual Control which separates the Chinese and the Indian controlled areas. Want also urged India to "harshly punish" those responsible.

Separately, Foreign Ministry spokesman Zhao Lijian on Wednesday said China was not to be blamed for the clash and that the overall situation at the border was stable. He said both countries were seeking to resolve the situation through dialogue.

According to Indian officials no shots were fired, but soldiers were hit with clubs and stones during the brawl between the two sides in the remote Galwan Valley. At least 20 Indian soldiers died,including a colonel, with India saying there were also casualties on the Chinese side. Some Indian media outlets spoke of over 40 Chinese soldiers either killed or injured.

While China's Foreign Ministry admitted there was a "serious physical confrontation between both sides that caused deaths and injuries," they did not confirm any casualties on the Chinese side.

The Chinese foreign ministry claims that Indian troops crossed the border twice on Monday, and that India was guilty of "provoking and attacking Chinese personnel." The ministry said Beijing had lodged "strong protests and representations" to Delhi.

The response in India

On Wednesday India's nationalist Prime Minister Narendra Modi said the country should be proud that its soldiers died while fighting.

"Their sacrifices won't go to waste," he said. "For us, the unity and sovereignty of the country is the most important thing. India wants peace, but when provoked, it is capable of giving a fitting reply, be it any kind of situation.''

Modi previously met with his defence and foreign ministers and the military chiefs late on Tuesday, but he had refrained from commenting as a clamor for action rose over the past day. The Prime Minister's office tweeted that he had called for a cross-party meeting on Friday to discuss the situation on the border.

But leader of the opposition Congress party Rahul Gandhi said a response was needed urgently. "Why is the PM silent? Why is he hiding?" he tweeted.

DW's Nimisha Jaiswal in Delhi says there has been a drive in India recently to "hurt China economically." However, she says, the "warmongering, jingoistic response" amongst the public when it comes to Pakistan is "missing when it comes to conflict China."

In an interview with DW, German Foreign Minister Heiko Maas called on the two countries to deescalate the conflict.

"These are two large countries and I don't want to begin to think about the conflict that could happen if this results in a real military escalation," Maas told DW. "That's why we are trying at all levels on both sides to bring about deescalation."

Maas told DW that Germany was unlikely to directly involve itself, but said it was using its influence to dissuade a military clash.

"I don't think that Germany needs to get involved everywhere as a mediator. But we are sitting on the UN Security Council and we will take on the presidency in July," he said.

"I believe the expectation in the international community is that countries like India and China should not get embroiled in a conflict that would not only affect those two nations, but also the entire region.

"And that's why we are doing what we can to influence both sides with the clear message to deescalate this conflict and avoid a further escalation, especially a military one."

Why is there tension at the border?

Over the past few weeks, Chinese and Indian troops have been locked in aggressive posturing at multiple locations along the two nations' de facto border, known as Line of Actual Control (LAC), raising tensions between the two nuclear-armed neighbors. Thousands of extra troops from both sides have been deployed to the border zone in recent weeks.

"These are the two biggest populations in the world," he said. "For them to engage in war would be calamatious. Not just for themselves, but for world peace."

Indian newspapers and Chinese state media are demanding a continuation of dialogue after a bloody incident on the border. From an Indian perspective, however, New Delhi must "wake up" and assess Beijing's push for power. (17.06.2020)

Nepal has protested India's inauguration of a new road that passes through disputed territory. Dozens of people were detained for demonstrating outside Indian Embassy. (10.05.2020)

India and China started the year with a round of inconclusive talks on an ongoing border dispute in the Himalayas. The disagreement is a potentially dangerous flashpoint between Asia's two biggest powers.