India's military has said 20 of its soldiers were killed in a "violent faceoff" with Chinese troops on a contested part of the countries' mutual border. China claims Indian troops had breached its territory. 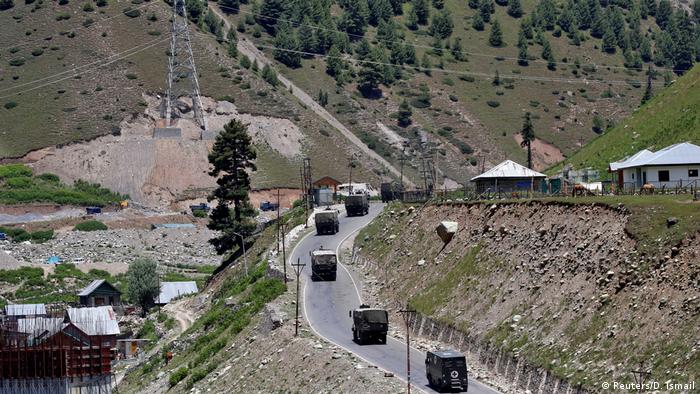 A total of 20 Indian troops were killed in a clash on the Chinese border, the Indian army said Tuesday, after weeks of rising tensions.

"During the de-escalation process underway in the Galwan Valley, a violent faceoff took place yesterday night with casualties," said an official statement reporting the first deadly confrontation between the two powers for decades.

The Indian army initially reported three deaths but this rose after a further 17 "who were critically injured in the line of duty at the stand-off location and exposed to sub-zero temperatures in the high altitude terrain succumbed to their injuries," the Indian army said in a statement.

Indian government sources said that no shots were fired and a physical fight had broken out between the two sides with soldiers using batons and throwing stones.

"Senior military officials of the two sides are currently meeting at the venue to defuse the situation," the statement said. The army added that both sides had since disengaged from the site of the overnight clashes.

China's Foreign Ministry confirmed that there had been a "violent physical confrontation" in the border area.

While the ministry made no mention of casualties, the Chinese government-controlled Global Times newspaper reported casualties in the Chinese military.

China accused India of crossing a disputed border between the two countries.

Foreign ministry spokesman Zhao Lijian said Indian troops crossed the frontier twice on Monday. He said India was guilty of "provoking and attacking Chinese personnel" which had resulted in the confrontation.

Beijing has lodged "strong protests and solemn representations" to Delhi, he said.

Zhao made no reference to fatalities, but India said Tuesday there had been casualties "on both sides."

Over the past few weeks, Chinese and Indian troops have been locked in aggressive posturing at multiple locations along the two nations' de facto border, known as Line of Actual Control (LAC), raising tensions between the two nuclear-armed neighbors. Thousands of extra troops from both sides have been deployed to the border zone in recent weeks.

Scuffle with sticks and stones

China says it does not want to see any more clashes on the border with India after a clash that killed at least 20 Indian soldiers. Meanwhile, India is awaiting the response of nationalist Prime Minister Narendra Modi. (17.06.2020)

How realistic is India's 'Made in China' boycott campaign?

Chinese and Indian troops have been locked in aggressive posturing at multiple locations in the Himalayan region. Now, many Indians are calling for a boycott of Chinese products, including social media apps like TikTok. (11.06.2020)