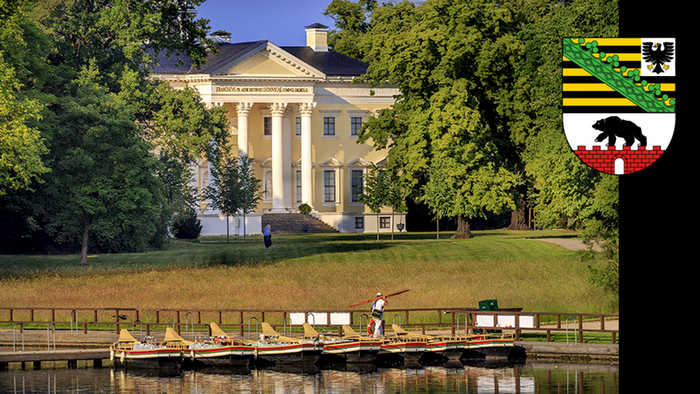 Saxony-Anhalt is not only rich in Romanesque cathedrals, but also in half-timbered towns. Magdeburg and Quedlinburg are two of the oldest towns in Germany. More than 1,000 years ago, both were the seats of power of the first Roman-German emperor, Otto the Great. Last but not least, Saxony-Anhalt is the home of the reformer Martin Luther.

In 2017 it was 500 years ago that Martin Luther nailed his theses against the sale of indulgences to the castle church door in Wittenberg. Many original sites of the Protestant Reformation still exist today. The Luther House, for example, once a monastery and Luther's residence, is now a museum with his personal objects and paintings. Check-in presenter Nicole Frölich visited Wittenberg during the anniversary year.

If a worldwide survey were to ask who the most famous Germans were, the Protestant reformer Martin Luther would likely be among them. He was baptized in the Church of St. Peter and Paul in Eisleben on November 11th, 1483.

The city of Quedlinburg, a UNESCO World Heritage Site, offers a short trip into the early Middle Ages. Founded more than 1,000 years ago, today almost half a million visitors a year are attracted by the charm of the narrow cobbled streets lined with half-timbered houses.

Another city, another millennium: In 2019 the Bauhaus turned 100th years old. Many original buildings designed by the famous school of art, architecture and design still stand in Dessau. The legendary school building and the master houses, which have been part of the UNESCO World Heritage since 1996, were built in 1925/26. Visitors can even stay overnight in this World Heritage Site.

The third World Heritage Site in Saxony-Anhalt: the Garden Kingdom of Dessau-Wörlitz, a green work of art from the 18th century. Numerous canals run through the English landscape garden. Visitors can take a boat out onto the water, past the temple of Venus, the palace and works of art. A highlight of the entire complex is the first artificial volcano in Europe.

The garden kingdom of Dessau-Wörlitz

The garden kingdom of Dessau-Wörlitz

The Middle Ages have truly left their mark along the Saale and Unstrut rivers: Castles, monasteries, churches and vineyards. Check-in host Lukas Stege gets into a canoe and explores the wine-growing country along the two streams and goes in search of the most beautiful medieval woman, said to be in Naumburg Cathedral.

Naumburg Cathedral is one of the most important cultural monuments of the High Middle Ages in Germany. Since 2018 the cathedral is a UNESCO World Heritage Site, which brings the total number in Saxony-Anhalt to five in total. This density of World Heritage sites in one state is considered unique in Germany.

Adrenaline in the Harz Mountains

Saxony-Anhalt not only attracts culture fans, but also more and more active holidaymakers. For example to the Harz Mountains. Attractions in Northern Germany's highest mountain range make sure of this. The 458 meter long steel suspension bridge at the Rappboden-Talsperre and a fast ride with the Mega-Zipline are definitely part of this, Check-in presenter Nicole Frölich is sure. She checked out the Harz Mountains before the Corona pandemic.

Active vacations in the Harz

Active vacations in the Harz

High above the village of Thale in the Harz Mountains lies the Hexentanzplatz, or "Witches Dance Floor". When it's not Walpurgis Night, the night from April 30 to May 1 that sees more than 10,000 witch- and magic fans meet for a wild party, the mountain plateau is quite idyllic.