Germany's Interior Ministry and Justice Ministry have reportedly agreed on a proposal to expatriate IS fighters. Interior Minister Horst Seehofer had tried to link the legislation with broader citizenship reform. 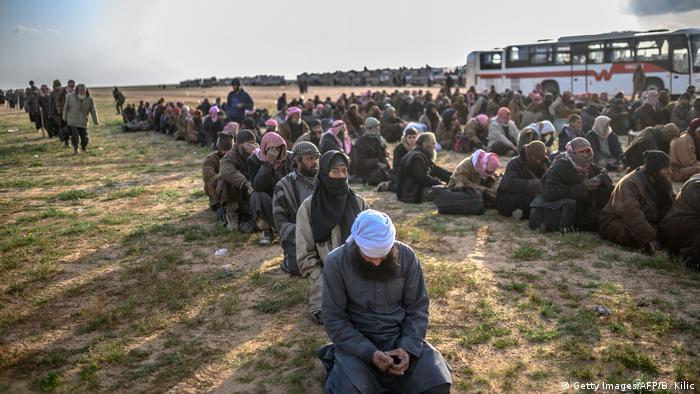 Germany's governing coalition has agreed to strip fighters of the "Islamic State" (IS) militant group of their citizenship, according to German outlets Süddeutsche Zeitung, NDR and WDR.

The new law would apply only to jihadis who are of age, have a second nationality and take part in future battles as part of IS. It would not be applied retrospectively, and thus would not affect IS fighters who are currently imprisoned.

Read more: Germany preparing to prosecute dozens of IS fighters

Germany's Nationality Act already includes a similar rule for dual nationals who join "the armed forces or a comparable armed unit" of another country without the permission of the German Defense Ministry.

The new legislation would expand the Nationality Act to apply to someone who "takes part in combat operations abroad for a terrorist militia," which is defined as an "armed paramilitary organization" that violates international law in order to "establish a new state or state structures."

But disagreements between the CDU/CSU and SPD stopped them from agreeing on a concrete proposal. The head of the CSU in the German Bundestag, Alexander Dobrindt, reportedly accused Justice Minister Katarina Barley from the SPD of delaying the legislation last week.

Barley is said to have resisted attempts by Interior Minister Horst Seehofer, a politician from the Bavarian CSU party, to link the legislation with further citizenship restrictions not directly related to terrorism.

Part of Seehofer's initial proposal to the Justice Ministry was to allow authorities to strip children under the age of five of their citizenship if their parents had unlawfully acquired German citizenship, for instance, by deception.

Seehofer reportedly gave up on the draft law following strong opposition from the Justice Ministry, but plans to present a new draft bill regarding citizenship as soon as possible.

Germany has been debating what to do about its citizens who fought for IS in Syria and Iraq since US President Donald Trump called for the repatriation and prosecution of some 800 foreign fighters in February.

US President Donald Trump is demanding European allies repatriate foreign "Islamic State" fighters captured in Syria. The call has sparked a heated debate about taking back German citizens who fought for IS. (18.02.2019)

Germany, France, and the United Kingdom have said that "Islamic State" remains a threat in Syria. All three appeared to dispute US President Donald Trump's claim that the militants had been vanquished. (20.12.2018)