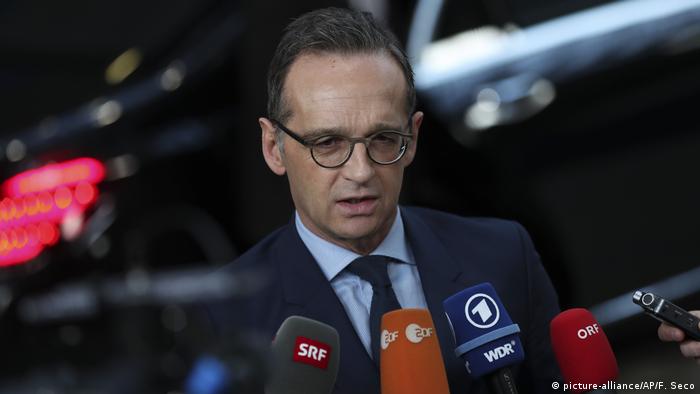 Foreign ministers from the European Union's member states gathered in Brussels on Monday to discuss a wide range of issues.

The most prominent topic was US President Donald Trump's call on Twitter that European countries take back and prosecute their citizens captured in Syria after fighting for the so-called "Islamic State" (IS).

"It certainly is not as easy as people in America imagine," Maas said on Monday. His Austrian counterpart, Karin Kneissl, said she couldn't comprehend the call, saying it would be in "nobody's interest" to release foreign fighters who had been captured by the international coalition and Kurdish fighters.

Hungarian Foreign Minister Peter Szijjarto dismissed the Uidea, saying: "Our major endeavor now should be not to allow them to come back to Europe."

Jean Asselborn, Luxembourg's foreign minister, criticized Trump for raising the issue on Twitter. "If we want to find a sensible solution, then we have to discuss this and not send tweets back and forth. That does not make sense."

The South American country is experiencing a political crisis since opposition politician Juan Guaido declared himself acting president in an effort to oust President Nicolas Maduro. More than 40 countries have recognized the move, as has the European Parliament.

Multiple foreign ministers, including France's Jean-Yves Le Drian and Romania's Teodor Melescanu, said that new elections were the only way out of the political impasse.

On Sunday, the Venezuelan government blocked five members of the European Parliament from entering the country. The European parliamentarians had been invited by Guaido, who said on Twitter that the group was "deported by an isolated and increasingly irrational regime."

The assembled ministers welcomed a ceasefire agreement between the Yemeni government and Houthi rebels, which the two parties reached in Stockholm, Sweden in December.

"The EU reaffirms that only a negotiated and inclusive political solution can end the conflict in Yemen," a statement from European Council read.

The council also said that "peace can only be achieved through negotiations involving the meaningful participation of all parties concerned."

Earlier this month, the Yemeni government and Houthi rebels reached a preliminary agreement to move fighters from the port city of Hodeidah, which serves as an entry point for the majority of imports into the country.