Marchers rallied through the streets of the German capital, with thousands of police officers on standby in case of violence. A court had allowed only one rally to go ahead. Thousands of demonstrators gathered in Berlin on Saturday to protest the German government's coronavirus policies.

Riot police walked alongside protesters, most of whom were unmasked, as helicopters watched from the air.

Large but scattered crowds of protesters across Berlin waved German flags and anti-lockdown slogans of the Querdenker group — a movement which includes coronavirus skeptics, far-right activists and anti-vaxxers.

What did the authorities do?

Berlin authorities banned nine planned demonstrations, including a rally by the Querdenker group.

However, one of the demonstrations successfully challenged the police ban in court and gained permission for a gathering of an expected 500 people on Saturday and Sunday.

A total of 4,200 police officers were on standby, including officers from Baden-Württemberg, Lower Saxony, Bavaria and Saxony who were deployed to the city to support their Berlin colleagues. 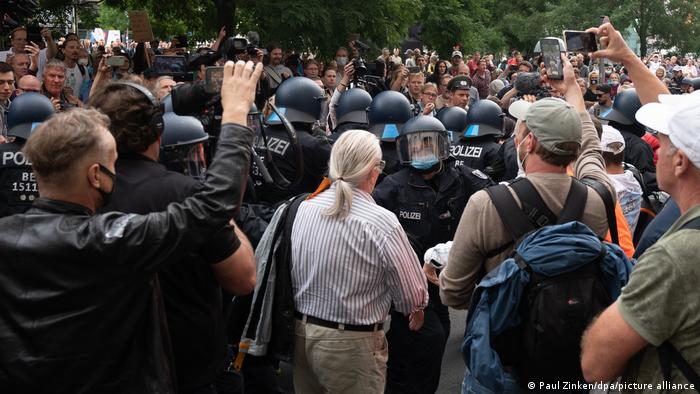 Thousands of police from regions around Germany came to Berlin to tackle protests.

"Experience has shown that a large number of people do come to the city and do not follow the ban," said a police spokesperson before the demonstrations.

"The police will enforce the assembly bans, be present accordingly and protect the government quarter in particular," the spokesperson added.

Why were the police concerned?

Last year, around 10,000 protesters against coronavirus restrictions took to the streets on August 29. The marches, which included far-right elements, tried to break into the Reichstag building that houses the German parliament after overpowering guards at its entrance.

This year, the authorities were taking no chances, keeping the Querdenker and anti-vaxxer groups well away from the government area of Mitte. 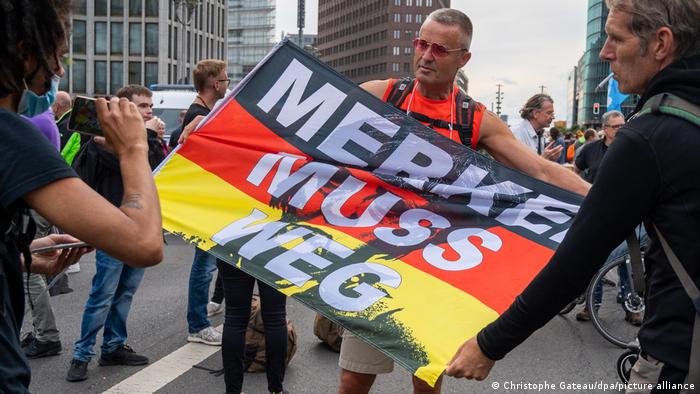 Far right parties have made overturning coronavirus rules central to their election bids.

Protesters waved German national flags and displayed slogans about freedom in their marches. They were generally of an older demographic.

Meanwhile, Berlin's more left-wing population kept well away from the protests, with none of their traditional insignia present at the demonstrations.

Another march was due to take place on Saturday afternoon under the motto "Train of Love."