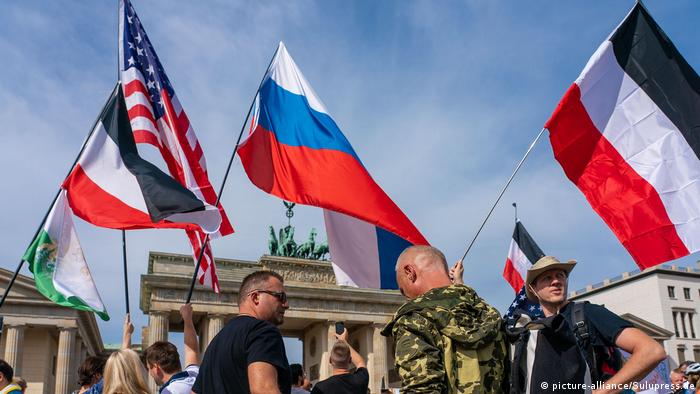 As I walked among the masses who had gathered at Berlin's Brandenburg Gate on Saturday, I saw all kinds of people, and I wanted to talk to as many of the protesters as possible. I was particularly interested in their posters, signs and symbols. One poster read: "Wo Unrecht zu Recht wird, wird Widerstand zur Pflicht," which translates roughly to "Where injustice becomes the law, resistance becomes the duty." "Gib Gates keine Chance" (Don't give Gates a chance), read another, a reference to the bizarre conspiracy theory that the Microsoft co-founder Bill Gates seeks forced vaccinations against the coronavirus. "Lehrer für Aufklärung" (Teachers for enlightenment) was a third. There were also various depictions of Chancellor Angela Merkel — as a prisoner, for example, or simply branding her "guilty." I saw posters referring to Article 8 of Germany's Basic Law, which guarantees freedom of assembly. Other slogans called for an end to the "coronavirus lies." There were also many pictures of hearts and flowers.

I have covered a number of demonstrations in Germany since 2015, but I had never seen such a heterogeneous collection of protesters. For a moment, I perceived the movement as an example of "lived democracy": a reflection of the diversity of German society. But, as I was speaking to one woman, I noticed a group of men walk by. One of them was carrying the flag that was used by imperial Germany from 1871 to 1918 and again by the Nazis from 1933 to 1935. Bearing bars of black, red and white, it is known as the "Reichsflagge" and it is waved by nationalists. I was so shocked that I interrupted my conversation.

Right next to the nationalist flag, another demonstrator was waving a multicolored peace flag. How was this possible?

Later, I saw a family of four who were demonstrating against mandatory masking in schools. I asked them whether they realized that they were marching side by side with nationalists. "We're not doing that," they answered. "They're doing their thing, and we're doing ours." 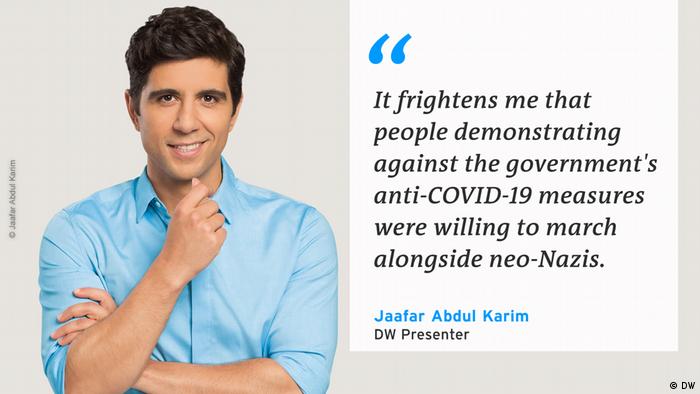 How could the protesters not see what was happening? How could they not understand that by marching alongside neo-Nazis and other nationalists, rather than speaking out against them, the people who claimed to be demonstrating against pandemic measures were also legitimizing groups that exist to exclude? It was clear well in advance that there would be nationalists at the demonstration. For days, racist and xenophobic groups had agitated on social media for more of their ilk to turn up.

What kept the other demonstrators from speaking out against the nationalists within their ranks? Did they even want to? Why did the woman I was speaking to when the group of men carrying the imperial flag walk by not express disgust?

It frightens me that people demonstrating against the government's anti-COVID-19 measures were willing to march alongside neo-Nazis. Do they not realize that they are being used? 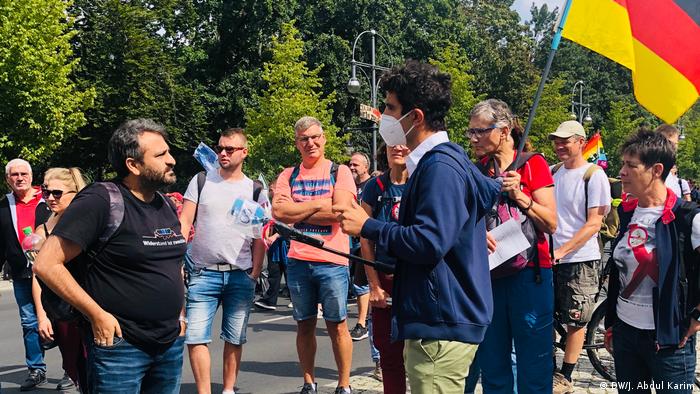 There were obvious racists and anti-Semites. They do not believe in democracy, freedom of speech and the right to protest for everybody. If they were to come to power in Germany, they would probably not allow demonstrations like Saturday's to take place at all.

I still believe that the court made the right decision in allowing the demonstration to go ahead even after the police and Berlin's city-state interior minister had tried to ban it. After all, demonstrations are what democracy is about. And people can choose whether to protest. Those who chose to march despite the participation of nationalists have to ask themselves whether they would be prepared to fight for their goals at the expense of the values that make up Germany's democracy.

If protesters against pandemic measures choose to march alongside nationalists rather than rescheduling for a different time — if they do not make a clear distinction between themselves and the neo-Nazis — does it not have the effective of bringing racists and xenophobes closer to the mainstream? Some protesters even said the nationalists "belong to us: They have the same concerns." But neo-Nazis don't have the same concerns. They are, always have been and always will be, anti-Semites and racists. They are not for democracy, as evidenced by Saturday's attempted storming of the Reichstag, the seat of Germany's parliament. As President Frank-Walter Steinmeier said, this was a clear "attack on the heart of our democracy."

What happened on Saturday cannot be ignored as if the problem will solve itself. We need a real discussion about how much access to the mainstream German society is willing to grant nationalists. We need to look closer at the groups who were willing to march with racists and xenophobes.

Coronavirus digest: US to lift restrictions for vaccinated travelers in November 1h ago

Lebanon: Day of mourning in Beirut as world powers call for calm after clashes 2h ago

Opinion: Why is 'Squid Game' so successful? Because it's simple 6h ago