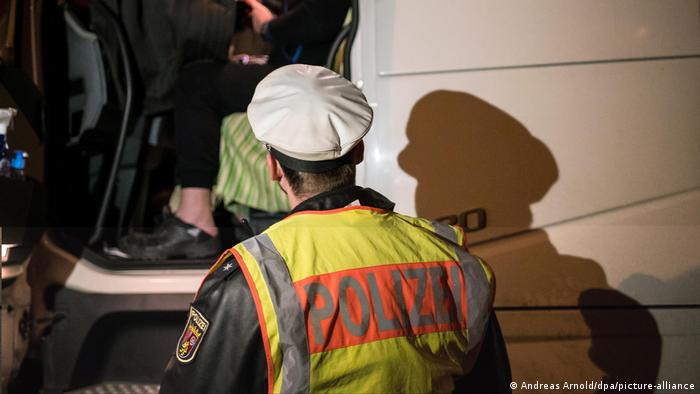 A group of migrants trapped inside a truck with little air to breathe have been freed at an autobahn rest area in western Germany, local police said Saturday.

The drama unfolded a day earlier as the migrants were piled on top of the truck's cargo with only 30 centimeters of breathing room.

As the oxygen inside the trailer ran out, one of the migrants called emergency services on his mobile phone.

Police tracked the location of the truck to a refueling stop near the town of Heiligenroth in the state of Rhineland-Palatinate.

Several members of the public also called police to report a group of people jumping out of a lorry.

Police arrived at the scene to find 8 migrants including one minor, who said they were from Eritrea.

None of them reportedly carried identity papers.

The driver of the truck was arrested and questioned on suspicion of people smuggling.

Police said he told them that the vehicle was loaded in his absence in the Netherlands and he had later locked the doors for security reasons.

The driver added that he only heard people knocking when he was refueling. He opened the doors and several people jumped out.

Officers emptied the truck of more than 200 kilos of tobacco cartons because they suspected that more migrants were inside.

The UK: Hunting down migrants

Police said the Eritrean nationals told them they wanted to go to England but had got into the wrong truck.

The migrants have been charged with illegal entry to Germany. The unaccompanied minor has been placed in the care of social services.

Friday's incident stirs memories of several other tragedies that have involved migrants suffocating in sealed vehicles while being smuggled through Europe.

In 2019, 39 Vietnamese nationals died in the back of a van in Britain, and 71 migrants were found asphyxiated in a lorry in Austria in 2015.

Intolerance of immigration has increased globally with some of the least tolerant countries found in the EU, according to a new survey. Attitudes in the US generally defy the government's anti-immigration policies.

Police have carried out raids across Germany, as well as in Slovakia, in an operation against people smuggling gangs. Thay made two arrrests and found dozens of individuals at properties in several German states.

The migrants were found dead in a refrigerated truck in the United Kingdom in 2019.