Working conditions in the meat industry have made headlines after COVID-19 outbreaks in slaughterhouses. Investigators are turning their attention to subcontracters suspected of smuggling in migrant workers illegally. 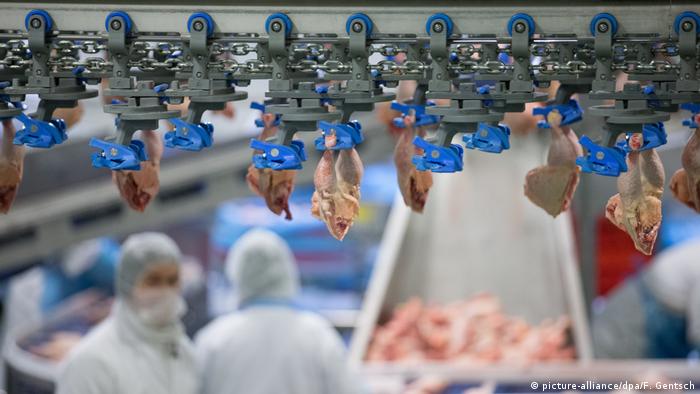 Around 800 officers launched raids on more than 40 premises in five German states in the early hours of Wednesday morning.

The investigation is centered on two companies, IRC and Berkana, which are suspected of illegally bringing workers from eastern Europe to Germany to place them in meatpacking jobs, a police spokesman said.

Ten people in total working for the two companies are accused of falsifying EU travel documents for citizens of non-EU countries like Belarus and Ukraine and organizing their travel into Germany, the spokesman added. 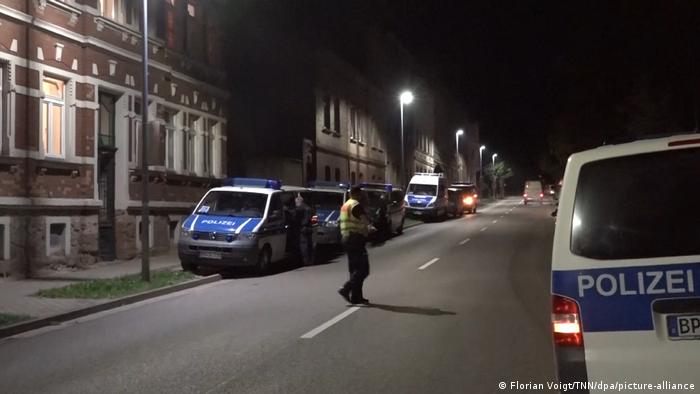 Police in the town of Weißenfels, Sachsen-Anhalt

Police said they had documented a recent increase in people stopped at Germany's borders traveling on false documents.

The raids are primarily being carried out in the eastern state of Saxony-Anhalt.

Further searches are being conducted in Lower Saxony in Berlin, Saxony and North Rhine Westphalia.

Working conditions in the spotlight

A special commission led by the public prosecutor in Halle, Saxony-Anhalt is at the head of the investigation into illegal contract workers being brought into Germany from eastern Europe.

The commission was set up in April 2020, before a series of coronavirus outbreaks at German meat packing warehouses revealed that many workers live in cramped and run-down quarters.

A massive outbreak in June at the Tönnies slaughterhouse in the western city of Gütersloh led to thousands of COVID-19 cases, which resulted in lockdowns for the city and the neighbouring district.

A Romanian worker at the Tönnies factory told DW in June that workers are mostly brought into Germany by subcontractors. The worker added that meat packers work long hours, were not paid overtime, and were forced to work while sick.

For decades, German meat processors have cut costs by employing thousands of workers from low-wage countries such as Romania, Bulgaria and Poland.

Instead of hiring the workers directly, the companies often rely on opaque, multilayered networks of subcontracted firms.

In July, the German government approved a bill that would ban the use of subcontractors in Germany's meat industry and require companies to hire workers directly. It is expected to come into force in January 2021.

The bill stipulates that when any meat-processing company has 50 or more workers, only those employed directly may slaughter and process animals.

A major coronavirus outbreak in Europe's biggest meat-processing plant was a disaster that was bound to happen and just as preventable.

The Difficult Life of Migrant Workers during the COVID-19 Pandemic 16.04.2021

We report from Kenya where families depend on money from abroad and from India, where some migrant workers are learning new skills.

Germany's new government and its high-profile health minister, Karl Lauterbach, have announced they are stepping up the fight against the pandemic. Tackling a vaccine shortage is top priority.

Under the new plan, all US federal workers and contractors must be vaccinated against COVID-19. Washington will also require companies with 100 or more employees to ensure their staff are vaccinated or tested regularly.