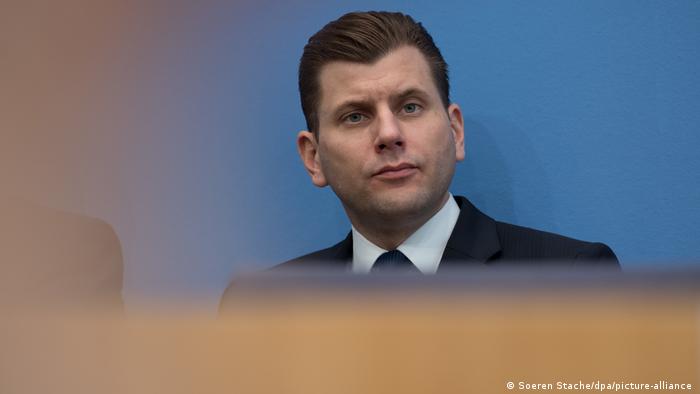 The far-right Alternative for Germany (AfD) on Monday sacked its former spokesman Christian Lüth for reportedly inhumane comments about migrants.

The online version of Germany's Zeit newspaper alleged that Lüth spoke of "shooting" and "gassing" migrants last February while meeting a woman influencer in a Berlin bar. The comments were aired in a TV documentary by German media giant ProSieben.

"The comments attributed to Christian Lüth are totally unacceptable and incompatible with the aims and policies of the AfD," said the co-leader of the AfD's parliamentary group, Alexander Gauland.

Suggestions that he had "even endorsed" Lüth's remarks were "fully absurd and entirely fictitious," said Gauland in a statement.

What were the alleged comments?

Meeting the Youtube influencer Lisa Licentia in Berlin's Newton Bar on February 23, Lüth is reported to have told her that the AfD used provocative tactics.

"The worse it goes for Germany, the better for the AfD," Lüth is quoted as saying, adding the party would otherwise be polling just 3%.

Asked by Licentia, whether it was in the AfD interest that more migrants came, Lüth is reported to have replied: "Yes, because the AfD does better."

"We could later shoot them all. That's not at all the issue. Or, gassing, or whatever you want. It's the same to me," Lüth is quoted as saying.

ProSieben did not identify the "high-ranking AfD functionary," it secretly recorded in its documentary "[Far]-Right, German, Radical."

However, Zeit said it had decided, based on its further research, to reveal the name because of the "special public interest."

The film, based on 18 months research in far-right circles by journalist Thilo Mischke, posed the question: Is Germany's liberal democracy in danger?

A history of controversy

Lüth has been with the AfD since its inception 2013. He was dismissed from his position as spokesman for the AfD parliamentary group in April after he reportedly described himself as a "fascist."

The AfD is currently the largest opposition party in the German Parliament, the Bundestag.

Former AfD leader Frauke Petry told DW that the party executive had known since "2016 at the latest" that Christian Lüth "performed the Nazi salute, as several witnesses have attested."

Documentary maker Thilo Mischke described the far-right scene in Germany as a "very dangerous" group that was gradually merging with regular people.

"They establish networks and use, for example, these anti-coronavirus demonstrations, and find a way to choose a new enemy — namely the democratic values of our society," Mischke told DW.

Thuringia state's domestic intelligence chief Stephen Kramer, interviewed by Mischke in Monday's documentary, said: "We are far beyond the stage of rascals."

"A few years ago I would have said to you that we are not the Weimar Republic. But when I look at the [recent] developments, especially in the last five or six years, I have to admit to you that I am seriously worried."