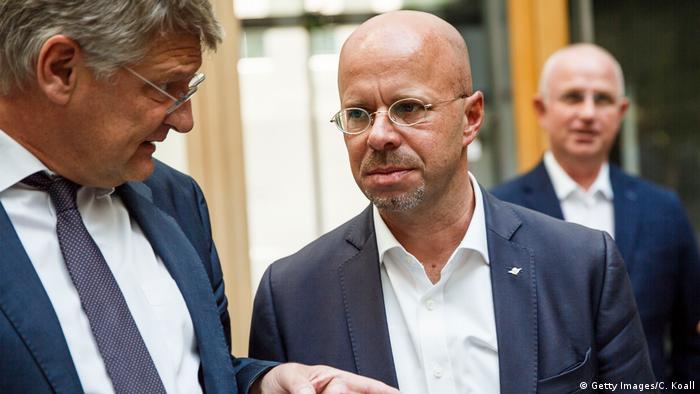 Germany's most successful postwar far-right party is stricken — divided over its coronavirus strategy and riven with civil war — but that doesn't mean it's dead.

The leadership of the Alternative for Germany (AfD) dropped a metaphorical hand grenade into the party last week by throwing out Andreas Kalbitz, party leader in the eastern state of Brandenburg and a leading member of Der Flügel, (The Wing) the hardcore faction of the party that represents between 20% and 40% of the members.

The Brandenburg party, meanwhile, has remained loyal to Kalbitz, voting on Monday to keep him in the AfD parliamentary group.

The meeting where it was decided to expel him last week must have been fractious, with the vote against tight. Even the party's highest ranking figures were split: co-leader Alice Weidel and parliamentary leader Alexander Gauland both voted to keep Kalbitz on board, which meant the other co-leader, Jörg Meuthen, only just managed to force his motion through.

Dropping the ball on lockdown protests

This internal rancor doesn't come at a good time for the AfD, which has been struggling to establish a position on the coronavirus pandemic. In recent weeks, it has dropped in some national polls to under 10%.

In early March, the AfD demanded that the government shut Germany's national borders, with some politicians occasionally trying to blame the outbreak of the virus on migrants.

Now the party has now come round to jumping on the coattails of anti-lockdown protests. AfD supporters have been a notable presence at such events, and in a Facebook post published on Saturday Meuthen condemned the way those who criticize lockdown measures are being dismissed as "corona-deniers."

Florian Hartleb, a German political scientist and specialist in far-right populism, said the party "didn't know exactly what to do with the coronavirus."

"They supported the course of Angela Merkel in the parliament, now they are basically starting to resist," he told DW.

But Ronald Gläser, spokesman for the AfD in Berlin, insists the party has been "something like an avant-garde" for Germany. "At the end of February, beginning of March, we called for border closures and said masks needed to be provided, and the government was saying, 'Oh, we don't need those, they don't help anyway'," he told DW.

"Now of course we've been spared the worst of it, and that's why the party shifted to call for more loosening of measures," said Gläser. "We especially supported the right to hold political demonstrations. We haven't called on people to protest in the sense that we are 100% in agreement with all the demands, but many of the concerns of the protesters are justified."

The Kalbitz affair has highlighted the AfD's dilemma: It has its power base in eastern Germany, where the AfD has replaced the former communists as a voice of protest and defiance against mainstream politics. In Thuringia, Saxony and Saxony-Anhalt the AfD garnered around 25% of the vote in the last state elections.

The AfD is stronger in Brandenburg, the sparsely populated state that surrounds Berlin, than almost anywhere else. Kalbitz himself ran a successful campaign in last year's election there, taking one in four voters. He was still polling at 20% a month ago, making the AfD the second-strongest party in the state.

It's a perennial dilemma for the AfD: To what extent should it accommodate its extremist base — currently centered around stubborn and powerful Thuringian leader Björn Höcke — while not scaring away the more centrist conservative voters it craves? Florian Hartleb told DW The Wing's influence is still huge, even though it was ordered to officially disband after the Federal Office for the Protection of the Constitution put the group on its extremist watchlist.

As Hartleb pointed out, a glance at the comments on the AfD's Facebook groups shows that Meuthen has become an enemy for many AfD supporters. "The radicals in the party have one idol — that's Höcke. They have one martyr — this is Mr. Kalbitz — and they have one enemy, Mr. Meuthen," said Hartleb. "We're not just talking about West and East, we're talking about a real split within the party. The conflict is about much more than Mr. Kalbitz."

AfD co-founder Gauland has publicly defended Höcke, insisting last year that the controversial former history teacher from western Germany was "in the center of the party." Höcke himself has defeated previous attempts to oust him from the party.

"The party is really linked with its extremists. Höcke won't give up," said Hartleb. "I think it's more likely that Meuthen resigns and the radicals take over the party, and there will be a split."

The pattern is familiar in the AfD's short history, with relatively moderate leaders like Bernd Lucke and then Frauke Petry consistently being ousted by their more overtly nationalist successors.

Nevertheless, with the party's history of riding out scandal, Hartleb doesn't think this crisis will bring the AfD down. "They're too strong in eastern Germany, where they are deeply rooted in society," he said. "I see a decline in the west maybe, but I don't see that it's over for the AfD."