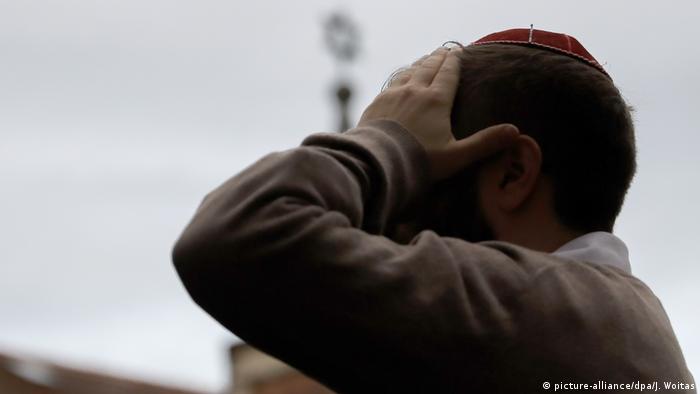 On Thursday, frustration over the far-right populist Alternative for Germany (AfD) party exploded in the Germany's parliament, the Bundestag. Parliamentary debate had not even begun when Bundestag President Wolfgang Schäuble, of Chancellor Angela Merkel's Christian Democrats (CDU), delivered an unmistakable message: He said it was "intolerable" that the AfD had taken to Twitter to ostracize people when referring to a crime motivated by a hatred of Jews. Those who spoke thus, he said sternly, were acting outside the "fundamental consensus" of the German parliament.

Others were far more blunt in their assessment during the morning debate. Social Democratic (SPD) parliamentary group leader Rolf Mützenich, for instance, spoke of parliamentarians who had disseminated "repulsive comments" about the victims online. He acknowledged that the perpetrator had acted alone, but added: "he was buoyed by a system of agitation, chauvinism and far-right extremism. And the AfD is part of that system." The party was under attack from every direction.

The broadsides were triggered by a retweet by AfD parliamentarian Stephan Brandner, the chairman of the Bundestag Legal Affairs Committee. Brandner had retweeted a post whose author contemptuously asked why politicians were "hanging around" mosques and synagogues with candles when the victims of the crime had been "Germans."

Does the party, whose leader Alexander Gauland described the Nazi era as "a bird shit" in German history, or whose firebrand member Björn Höcke called for a "reversal of Germany's culture of remembrance," bear responsibility for the attack in Halle?

Many politicians have labelled the AfD the "intellectual arsonists" behind the attack in the eastern German city. Earlier in the week, Vice Chancellor Olaf Scholz (SPD) said, "The AfD shouldn't act like it had nothing to do with all this."

Last Wednesday, a heavily armed attacker attempted to force his way into a synagogue in Halle to carry out a massacre. When he failed to get in, he killed two innocent bystanders. He has confessed to carrying out the crime, saying he was motivated by anti-Semitic and xenophobic beliefs. The AfD bears no legal responsibility for the crime, but many politicians believe the party is morally culpable due to its far-right rhetoric.

Safety of Jews in Germany

Calls for the AfD to distance itself from extreme-right radicals

Among those making such accusations is Marco Buschmann, parliamentary group leader of the liberal Free Democratic Party (FDP). Buschmann told DW that the attacker was looking for "scapegoats." He went on to say: "Therefore, all those who use scapegoat theories to gain votes naturally bear responsibility for strengthening the beliefs of people like him."

For that reason, many say the AfD must clearly distance itself from Germany's far-right extremists, but party members like Höcke are doing no such thing.

Critics of the AfD point to clear "overlaps" with the so-called Identitarian Movement, which intelligence agencies have labeled a right-wing extremist group that rejects every aspect of Germany's governmental legitimacy. Intelligence services are also keeping an eye on the AfD's "Young Alternative" youth group, as well as a group known within the party as "The Wing." Both groups have been labeled suspicious by authorities and are under constant intelligence service surveillance.

But is the AfD really responsible? The attacker in Halle was radicalized online, and was active on online gaming sites and radical Internet forums. That is what fueled his motivation. He is not known to have any connection to the AfD.

Chemnitz — a battle cry for the far-right

"The AfD is an intellectual arsonist," and therefore "mainly responsible for fueling a climate of anti-Semitism and resentment," as Hans-Joachim Funke, who researches anti-Semitism and far-right extremism, tells DW. Funke says the AfD is "complicit" in the attack in Halle and points to the so-called funeral march in the eastern city of Chemnitz in the summer of 2018. In Chemnitz, AfD politicians joined hooligans and known neo-Nazis, taking to the streets to protest a murder. "That was a signal, a summons, a battle cry," with which the AfD sought to turn up the heat of the social discourse. "The attacker [in Halle] would not have pushed himself to carry it [his crime] out, in the absence of that kind of environment," says Funke.

Read more: Anti-Semitism in Germany isn't 'back' — it never left

The AfD fights back

AfD parliamentarian Beatrix von Storch was defiant when she sat down with DW: "It is absurd to say that the AfD is responsible for such an [racist] environment." The politician insisted instead that "leftist artists and publicists who denounce the state of Israel" are to blame for the current anti-Semitic climate.

The Bundestag debate highlighted the deep divisions currently found in Germany. Those who attacked the AfD — and there were many — garnered applause, whereas AfD parliamentarians groaned at or heckled accusers in an attempt to defend themselves.

In the end, Interior Minister Horst Seehofer, of the CDU's Bavarian sister party CSU, called on AfD parliamentary group leader Alexander Gauland to distance himself from Brandner's contemptuous retweet. Gauland indignantly rejected the demand, saying, "I refuse to apologize so long as a member of the government can stand here and claim that the AfD is the political arm of right-wing terrorism."

Gauland's party colleague Brandner, whose retweet upset so many parliamentarians, reacted differently. Hours after the anti-Semitism debate had finished, he approached the speaker's lectern and ruefully exclaimed, "I'm sorry."

German security officials want more authority to target and prevent far-right violence. Among the proposals on the table is more monitoring of the internet and gathering evidence to outlaw some far-right groups. (15.10.2019)