German security officials want more authority to target and prevent far-right violence. Among the proposals on the table is more monitoring of the internet and gathering evidence to outlaw some far-right groups. 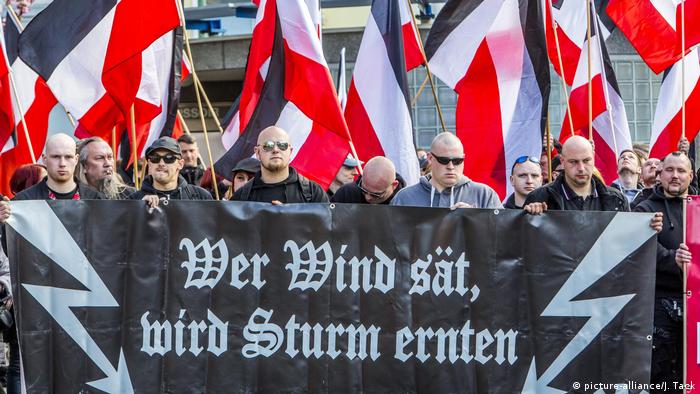 Police have identified 43 so-called right-wing "Gefährder," or individuals intent on carrying out violent acts of terrorism, a number double the count from two years ago.

In addition to foreigners and Jews, politicians and supporters of a liberal refugee policy have become the target of right-wing extremists.

"Right-wing crimes endanger our democracy," Holger Münch, head of the Federal Criminal Police, said in Berlin. "The situation is serious."

In the latest right-wing act of violence that has roiled the country, a gunman attacked a synagogue last week in the eastern city of Halle. Unable to enter the synagogue, he shot and killed two people on the street.

The terror attack came months after a pro-refugee regional official, Walter Lübcke, was gunned down at his home by a right-wing extremist.

Federal security authorities are now preparing to increase observation of known right-wing groups and of radicalization and networking on the internet.

According to a concept proposed to the Interior Ministry, security authorities want to comb the internet for signs of radicalization and to better understand right-wing groups.

The goal is to increase pressure on such groups and eventually outlaw them, including possibly the so-called "New Right" organizations such as the Identitarian Movement.

Security officials also want to establish a central office to combat hate crime on the internet. Under the proposal, internet and social media providers would be required to report to police criminal content that they are already required to delete under current legislation.

Police seized more than a thousand weapons in 2018 during raids on far-right groups, amid increasing concerns about militant attacks. Experts are alarmed at the increase. (28.09.2019)

The neo-Nazi NSU murdered 10 people across Germany between 2000 and 2007. According to a survey, memorials to honor those victims have been repeatedly targeted by vandals. (13.10.2019)

Eight members of an alleged neo-Nazi terror cell from Chemnitz are on trial in an eastern German court. The case involves a suspected plan to carry out "violent attacks" and launch a civil-war-like rebellion in Berlin. (30.09.2019)