Police seized more than a thousand weapons in 2018 during raids on far-right groups, amid increasing concerns about militant attacks. Experts are alarmed at the increase. 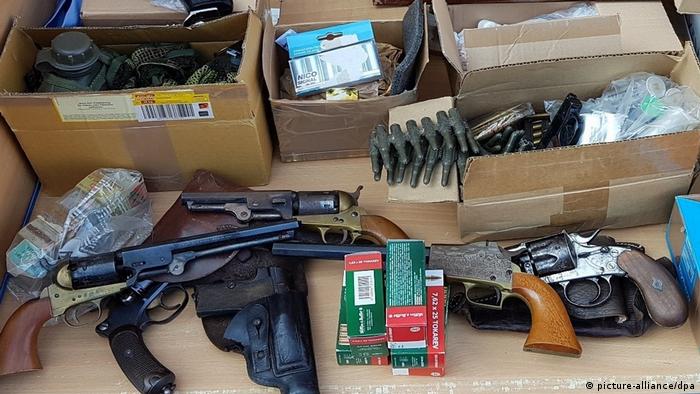 An expert on right-wing extremism has warned of "massive rearmament" by neo-Nazi groups after German police seized 61% more weapons during raids on the radical right in 2018 than the previous year.

The weapons seized included handguns, rifles, and other conflict apparatus including explosives, detonators, knives, batons, projectiles and even replica guns.

The government figures were based on 563 right-wing-motivated crimes involving weapons, including 235 violent incidents.

The increase was described as "frightening and alarming" by Matthias Quent, an expert on right-wing extremism at the Institute for Democracy and Civil Society, or IDZ.

He said the figures showed "a massive armament and rearmament of Germany's right-wing radical scene."

Quent said neo-Nazi groups were preparing to stage fresh militant attacks on minorities, political opponents and representatives of the state.

"Their goal is to intimidate society and the displacement of certain groups of people. Parts of the scene even want a civil war," he told ARD.

A separate Interior Ministry report released this month revealed that authorities had registered 8,605 right-wing offenses in the first half of 2019, an increase of 900 crimes.

The number of violent crimes committed by known right-wing extremists rose by 3.2%, from 1,054 to 1,088, according to the report.

The domestic security agency (BfV) believes there are around 24,000 right-wing extremists in Germany, of whom nearly 13,000 are considered "violence-driven."

Police have been on high alert for possible attacks on lawmakers since the murder in June of German politician Walter Lübcke, who was shot dead outside his home in an apparent act of right-wing violence.

Lübcke had been a keen supporter of German Chancellor Angela Merkel's immigration policy.

Asylum-seekers and refugees, meanwhile, continue to be the targets of attacks in Germany and are the victims of most far-right violence.

Police registered 609 attacks on the newcomers to Germany during the first half of 2019, according to newspaper the Neue Osnabrücker Zeitung.

Earlier this month, German media reported that the federal criminal police agency plans to overhaul its structures to step up the fight against far-right groups and hate crimes.