Neo-Nazi preppers in Germany ordered body bags and used police databases to draw up lists of local politicians to target, says the domestic intelligence agency, BfV. The network was preparing for social collapse. 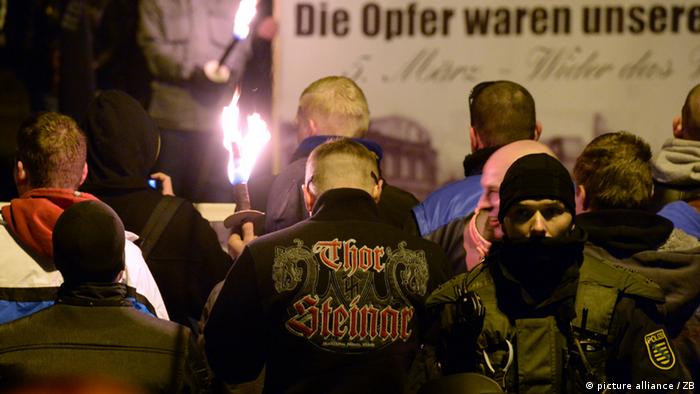 Germany's domestic intelligence agency says a group of neo-Nazis compiled a list of political opponents and ordered 200 body bags and quicklime in preparation for a potential collapse of state order, named "Day X."

Most of the more than 30 preppers, who called themselves Nordkreuz (Northern Cross), were associated with Germany's police and military, including several former and one active member of the elite forces unit of the state police of Mecklenburg-Western Pomerania.

Preppers is a term used to describe those preparing for social collapse or natural disaster by stockpiling food and emergency supplies. Speaking to the local Märkische Allgemeine newspaper in 2017, members of Nordkreuz described themselves as people with a "healthy conservative attitude" who simply collected supplies for a major disaster.

But all of the members of the group were trained marksmen and had access to firearms and ammunition, according to the RND newspaper network, which reported the conspiracy on Friday, citing sources inside the Federal Office for the Protection of the Constitution (BfV), Germany's domestic intelligence agency.

The BfV also believes that the group, which communicated via the messenger app Telegram, was preparing for Day X with "enormous intensity," and had used data from police computers to compile a list of 25,000 names and addresses.

These mostly belonged to local politicians from Germany's main political parties, the Christian Democrats, Social Democrats, Greens and Left party. All of the politicians were considered supporters of "pro-refugee" policies.

Read more: Opinion: Politician's killing must be a wake-up call

According to the RND, each member of Nordkreuz had scoured their own local area for potential targets, most of which were concentrated in the states of Mecklenburg-Western Pomerania and Brandenburg in northeastern Germany, specifically the towns of Wismar, Ludwigslust and Schwerin.

The conspiracy came to light after federal prosecutors submitted an application a few weeks ago to the Bundestag's intelligence-gathering oversight commission, asking to carry out wider surveillance against Nordkreuz. This application included a "material list" showing that the group had ordered body bags and quicklime, used to dispose of corpses.

State prosecutors have been investigating Nordkreuz since 2017 on suspicion of planning a terrorist attack. Three members of the group are under a separate investigation by state prosecutors in Schwerin for allegedly stealing 10,000 rounds of ammunition and a machine gun from the state police.

A similar alleged far-right prepper conspiracy, also involving a kill list, was uncovered two years ago in the same state. That came following an investigation into Franco A., a Bundeswehr soldier with far-right sympathies accused of planning to trigger social unrest by carrying out a terrorist attack while posing as a Syrian refugee. The investigation was eventually dropped for lack of evidence.

According to RND, the "Hannibal" network that Franco A. had connections with, which was also centered in Mecklenburg-Western Pomerania, was tied to Nordkreuz. Investigators believe there may be four such "Day X" far-right prepper conspiracies in Germany, each covering a different region of the country, though that suspicion has not been confirmed.

Neo-Nazi terrorism suddenly came into focus again earlier this month when known neo-Nazi Stephan Ernst was arrested for the killing of local conservative politician Walter Lübcke, who was found shot dead on his terrace in Wolfshagen, Hesse, on June 2.

Ernst confessed to the shooting earlier this week, claiming to have acted alone, but two more men were arrested on Thursday on suspicion of supplying him with weapons and facilitating contacts.

In its annual report, released on Thursday, the BfV counted 24,100 right-wing extremists in Germany — 100 more than in 2017 — of whom 12,700 were considered "violence-oriented." But the report made no mention of Nordkreuz.

On Saturday, Martin Dulig, economy minister and head of the Social Democratic Party (SPD) in the state of Saxony, revealed that an unknown person had sent a fake assault rifle to his home, apparently as a death threat. "I get threatened and insulted every day, like many other politicians and citizens who work to support our humane society and our democracy," he told Die Welt newspaper. "I do not make most of these threats public ... but this has been aimed at my family."

Four city halls have been evacuated in different states across Germany in the past two days. Police are trying to determine if the threats are linked. (26.06.2019)