Prosecutors alleged the German officer had planned to pose as a refugee and carry out a terrorism attack on politicians. A high court dropped terrrorism charges, but the officer will be tried for other offenses. 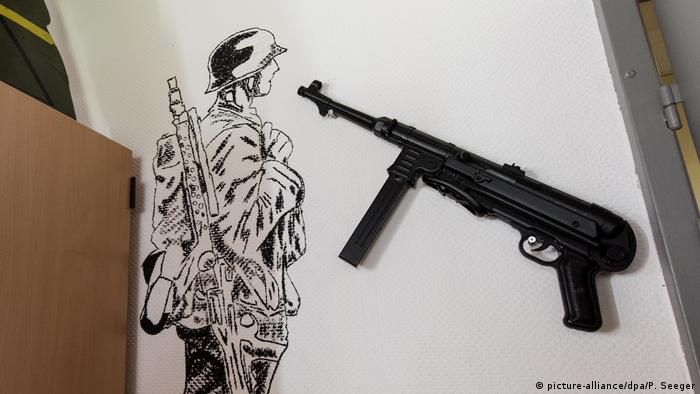 A German court on Thursday dismissed terrorism charges against a German soldier who prosecutors had accused of planning to pose as a Syrian refugee and carry out an attack on politicians.

The Frankfurt Higher Regional Court found that there was not an "overwhelmingly high probability" that the officer had planned to carry out an attack, although it said that it was likely he procured two pistols, two rifles and 51 explosive devices.

The officer, identified as Franco A. in line with German privacy laws, will now face a lower state court in Darmstadt. He is charged with violating weapons laws, theft and fraud.

Prosecutors can appeal the court decision.

The 29-year-old was arrested in April 2017 in a case that caused debate about right-wing extremism in the military and failures in the asylum process.

Prosecutors say Franco used a fake identity to successfully register as a Syrian asylum seeker even though he spoke no Arabic. He allegedly planned to carry out an attack on German politicians or refugee rights advocates in an attempt to create a backlash against refugees. A search of his residence found ammunition and military equipment obtained from the Bundeswehr, as well as memorabilia from Germany's Nazi-era army, the Wehrmacht.

In its ruling, the Frankfurt Higher Regional Court justified its decision based on the "high requirements of the Federal Supreme Court" regarding preparations for a serious state crime.

According to the high court's standards, the suspect must have demonstrated "a concrete commitment" to carrying out a violent crime.

The officer was in custody for months, but the Federal Supreme Court released him in November pending trial after finding insufficient evidence he was preparing to commit a criminal act against the state.

One year ago, a right-wing extremist German army officer was arrested on suspicion of terrorism, then it was discovered he was also leading a double life as a Syrian refugee. The case is anything but closed. (26.04.2018)

Germany is to begin surveillance of a growing subculture with some far-right affiliations known as the "prepper scene." The network collects weapons and other supplies in case of natural disasters or social collapse. (08.12.2017)