Violent and racist crimes are on the up in Germany, according to official statistics on politically motivated crimes. Crimes by right-wing extremists hit their highest levels since records began in 2001. 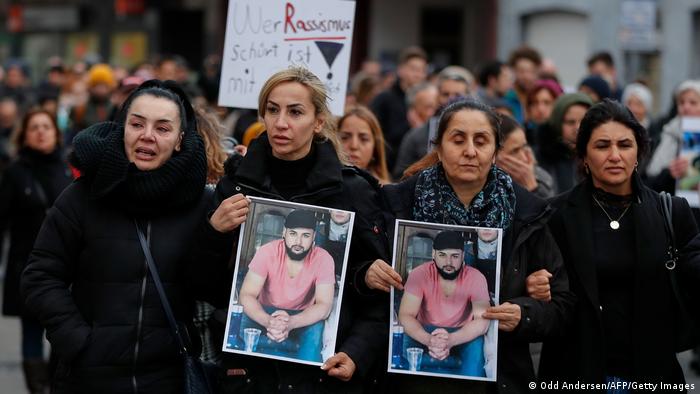 The minister expressed concerns over increasing incidences of politically motivated crimes, especially those carried out by right-wing extremists, such as the murder of 11 young people with immigrant heritage in the city of Hanau in February last year.

"Politically motivated crimes are increasing significantly," Seehofer said, adding that 8.5% more cases were recorded in 2020 over the previous year.

The data is very "concerning" because it represents a dangerous trend, despite only representing around 1% of all crimes, he added.

The interior minister was joined by the president of the Federal Criminal Office, Helger Münch.

The number of incidents recorded as being motivated by right-wing extremism increased to its highest point since the German police began to keep records of politically-motivated crimes in 2001.

Some 23,064 crimes were counted as right-wing extremist, an increase of 5.7% over the previous year.

The majority of violent crimes classified as politically-motivated were perpetrated by right-wing extremists, with 13 victims of attempted violent crimes on top of the 11 who were killed in Hanau.

"The increase in violent crimes by 18.8%, to a total of 3,365 incidents, is particularly bad," the interior minister said. 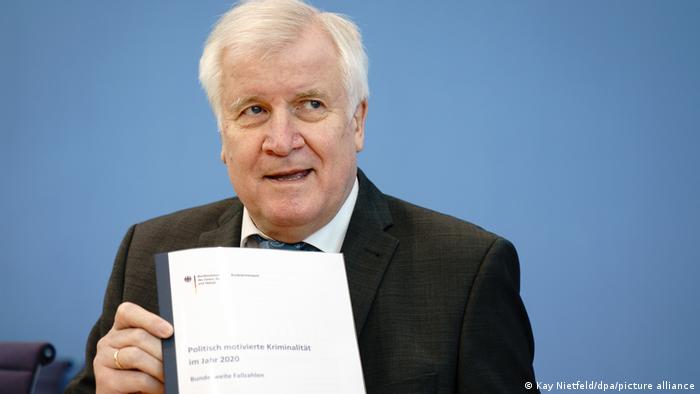 "This shows what I've been saying since the beginning of my time in office, that right-wing extremism is the biggest threat for security in our country, since the majority of racist crimes are committed by people from within this spectrum," he added.

Out of the criminal incidents that were classified as "crimes of expression" — including hate speech and propaganda — the vast majority, 65%, were considered to come from right-wing extremist perpetrators.

Antisemitic hate speech was also on the rise with an increase of 15.7% in incidents, many of which were carried out online, Seehofer said.

"Antisemitic hate is a core component of right-wing extremist ideology. This development in Germany is not just concerning but, in the context of our history, deeply shameful," the minister said.

Attacks on journalists by COVID-19 deniers

Seehofer also brought up the protests against COVID-19 restrictions by the the so-called "Querdenker" movement, which loosely translates as "lateral thinkers."

The minister said that these people were exercising their rights of expression in a democracy, but the police had found problems in distinguishing between civil protesters and extremists among their ranks.

Konstantin Kuhle, interior affairs spokesperson for the business-friendly FDP party, told DW on Tuesday that right-wing extremists are using the coronavirus pandemic to propagate their ideologies.

"It appears that right-wing extremists and conspiracy theorists are using the pandemic to spread their theories, to spread hatred. And we've been seeing this all around Germany in the last weeks and months," he said.

He called on anti-lockdown protesters to distance themselves from far-right ideologies.

"These groups are obviously using the frustration that we are seeing in some parts of the society to hijack these manifestations and to combine it with their ideology. And I think it is also the responsibility of those who are trying to use their freedom of assembly — and they can do that — to distance themselves from right-wing behavior and from right-wing extremism."

Seehofer also noted an increase of 11% for crimes coming out of the extreme left-wing scene, noting in particular a 45% increase in uses of violence.

He then pointed to the high level of "confrontational crimes" which he said were often perpetrated by left-wing extremists, such as taking part in counter-demonstrations to so-called Querdenker marches.

Despite the focus on right-wing extremism among the crime data and the threat it posed, Seehofer said the ministry would keep its eye on left-wing extremism — just as with Islamist extremism.