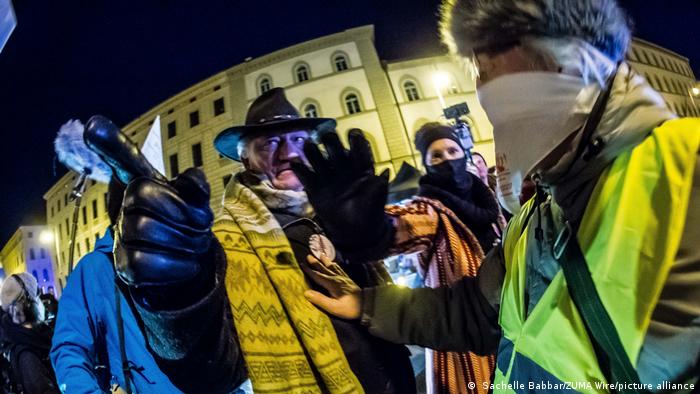 In Munich, on the fringes of an anti-coronavirus demonstration, a so-called 'Querdenker' (unconventional thinker) harasses a journalist.

At the Easter demonstration against COVID restrictions in Stuttgart, there were again violent incidents against journalists. A TV crew was forced to end their live report after protesters started pelting them with stones.

This is not a singular incident:A demonstration in Kassel, Germany on March 2021 saw about 20,000 people were protesting in Kassel against the Federal Government’s coronavirus policies. Hardly any protesters were wearing a protective mask. Social distancing was not observed. The mood was tense and heated. The many journalists on-site were filming and taking pictures.

"Overall, the protesters were very hostile," remarked Marco Kemp, a photographer. He is right in the middle of the action with his camera. "The threats were there, shouts of a 'lying press.' A colleague was knocked down right at the beginning of the coverage.” Kemp recounted that it went on like this the entire day.

Insults and attacks are now part of the everyday work of journalists in Germany — at least for those covering anti-lockdown protests. The latest figures from the European Centre for Press and Media Freedom (ECPMF) confirm this new reality. In the year 2020 alone, the Leipzig Institute recorded nearly 70 attacks on female and male journalists, the highest number in years. Most of the perpetrators are male. At least 71 percent of the attacks happen at rallies against coronavirus mitigation measures. According to ECPMF, almost half of the attackers are right-wing extremists: neo-Nazis, hooligans, or so-called Reich citizens. But the attacks also come from citizens with a moderate political outlook.

"Ordinary citizens believe they can just go and insult whoever they want," said TV journalist Arndt Ginzel, confirming the figures. He has been reporting for years for the Second German Television (ZDF) on the right-wing scene, conspiracy theorists, and protest events against government policies. "Disinhibition has increased. There is hardly a demonstration where you can say you're safe." 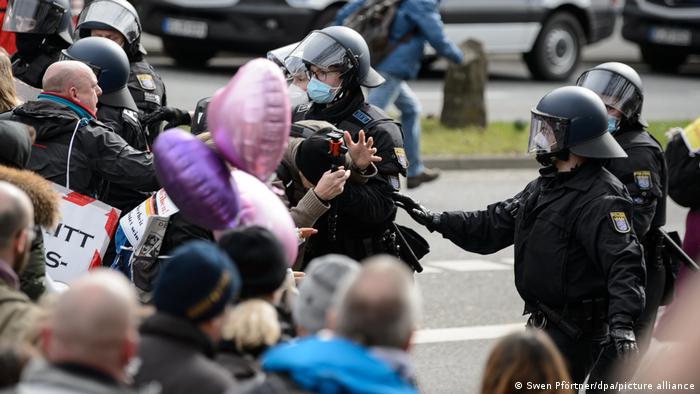 It is no longer unusual for German journalists to be escorted by security personnel when covering major events. TV journalists in particular live dangerously; they are easily spotted due to their cameras and microphones. As a result, DW has also tightened safety measures for colleagues on assignment due to increased aggression by protesters towards reporters.  The aggression has become a danger to journalists.

"People deliberately showed that I was not wanted," DW reporter Anne Höhn recalls of an anti-coronavirus rally in Berlin in August 2020. "They got very close to me physically — even though we had four security personnel with us." This aggression is more than just personally unpleasant. It also has an impact on one's work. "It makes you hesitant to spontaneously seek out stories," she says. "You see something interesting, but you don't dare to go because you're not supposed to leave your group and security."

Reporters Without Borders are also alarmed by the developments in Germany. The attacks and insults endanger extensive reporting, warns the organization's communications director, Sylvie Ahrens-Urbanek. "Of course, it is possible for media to also use security personnel. However, the media can also say, that is too expensive for us to send reporters out there."

The German police have also come under criticism. Many reporters and journalism associations complain that the police are doing little to protect members of the press. During the riots in Kassel, the police were visibly absent, says Marco Kemp, a photographer: "I have the impression that the police often find it a burden to support journalists. And that they would rather we just leave."

ZDF reporter Arndt Ginzel, like other journalists, is calling for more media education programs in Germany. Many people know too little about journalism as a profession, he says: "Pupils need to learn and understand how journalists work and how they make a TV report, for example."

Until further notice, bodyguards will be part of daily work routines for at least some journalists in Germany. For DW TV reporter Thomas Sparrow, that is exceptional. "I come from Colombia — a country where there has been an armed conflict for over fifty years. But only in Germany have I had to work as a journalist with bodyguards."