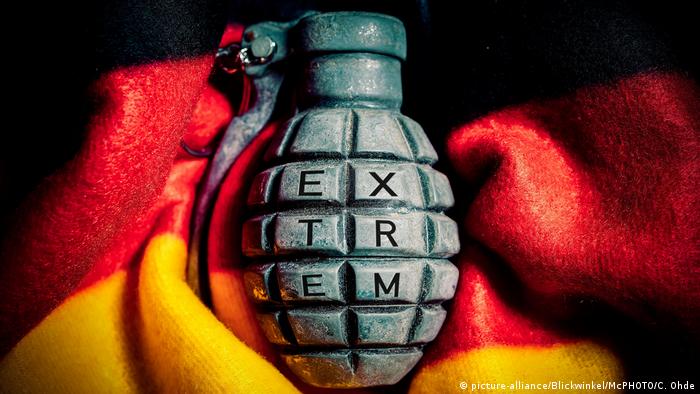 The list is getting longer. In January it was Combat 18, in March the Reichsbürger group United German Peoples and Tribes and now Nordadler; three right-wing extremist groups banned within six months shows that Interior Minister Horst Seehofer is putting his words into action. Of course, these bans won't solve everything, but they're more than just political symbolism. Germany's far-right scene has for some time been feeling an ever-increasing pressure.

Read more: Who are the Nordadler?

Seehofer is only one of many important players — the government has finally realized that the extremely difficult fight against right-wing extremism can only be successful with a joint effort. Legislators, judiciary and civil society: everyone has to take part. And they're more committed than ever to fight racists, anti-Semites and the many other enemies of a democratic, tolerant society. It's time to acknowledge that fact, despite the sometimes great difference of opinion over the supposed best strategy to counter neo-Nazis.

"I would like to emphasize that right-wing extremism poses the greatest threat in our country," Seehofer said in February after the racist massacre in Hanau, the state of Hesse, that left 10 people dead. For a long time, many political leaders lacked this insight.

The far-right neo-Nazi National Socialist Underground (NSU) group also murdered 10 people between 2000 and 2007, and remained undiscovered for more than a decade. However, despite the heartfelt horror after the terror group was exposed in 2011, what followed were half-hearted efforts to get to the root of the problem — including the unsatisfactory legal approach investigating the NSU's environment.

During the five-year trial, the Federal Prosecutor's office stubbornly stuck to the idea of a trio of perpetrators at the core of the group: two of them are no longer alive and the third, Beate Zschäpe, has been sentenced to life in prison. But there were — and still are — countless indications that the NSU relied on an extensive network of neo-Nazis behind the scenes.

Unfortunately, even more people had to die before Germany stopped questioning the real dimension of right-wing extremism and right-wing terror. But the murder of local Hesse politician Walter Lübcke in June 2019 and the assassination attempt on the synagogue in Halle four months later silenced the last remaining doubters. The German government reacted with an action plan, involving not just the Interior Ministry but also the Justice and Family Ministries, all working together.

The renewed determination is also probably due to the concern that the country is being increasingly subverted by right-wing extremists. Reports of neo-Nazi activities in the police and the Bundeswehr have repeatedly shaken the public's confidence in the authorities. Defense Minister Annegret Kramp-Karrenbauer's response was clear: extremist activities taking place within the elite unit Kommando Spezialkräfte (KSK) group are now being painstakingly investigated.

The radicalization of elite soldiers operating in secret is a prime example of the mutually beneficial relationship between right-wing extremists both online and offline. What starts with racist comments in an online chatroom can lead to fantasies of violence and hidden stashes of weapons. After that, it's theoretically only a short step to actual deeds.

Fortunately, the KSK discovered the potential perpetrators in time — due in part to the fact that the Bundeswehr's military counterintelligence service and the Verfassungsschutz, Germany's domestic security agency, are taking a much closer look these days.

This latest ban on the Nordadler neo-Nazi group only serves to reinforce the impression that groups at all political and social levels have become better at cooperating. What's still missing is for the Verfassungsschutz to open up all its files that deal with right-wing extremism. There have been many signs that the domestic security agency presumably played an inglorious role in many cases, not just the NSU case. Taking a firm stand against right-wing extremists is more important than ever — and transparency on the part of the state is absolutely essential.