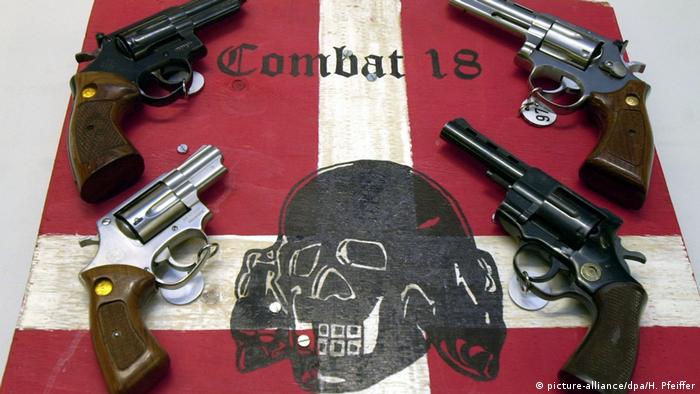 Last Thursday, Germany's branch of Combat 18 decided to let its mask slip just a little: The neo-Nazi group took the rare step of releasing a video. Despite a balaclava, black gloves, zipped-up anorak, and an artificially distorted voice, it didn't take long for antifascist research organization Exif to identify the man they believed was filmed standing in some shrubbery: Robin Schmiemann, a leading figure of the group.

The disguised man read out a declaration saying that Combat 18 felt obliged to go public "due to recent incidents and the media's cannibalizing of our name for the sole purpose of increasing circulation."

"Germany has arrived at the point where every citizen is forced to protect himself and his family alone," he says. "The citizens' trust in politicians, judiciary, and the media has been completely destroyed."

Schmiemann spent eight years in jail for shooting a Tunisian-born man during an armed robbery in Dortmund, and while behind bars exchanged letters with Beate Zschäpe, a convicted member of the neo-Nazi terrorist cell the National Socialist Underground (NSU). 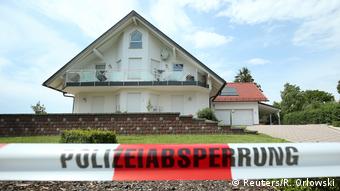 Stephan E. is suspected of murdering pro-migrant politician Walter Lübcke in his garden

For some researchers, the fact that the video appeared at all shows that Combat 18 has been rattled by the attention created by the killing of politician Walter Lübcke. Since it emerged that the main suspect, Stephan E., had ties to the group, Germany's Interior Ministry has been under new pressure to outlaw what is considered a terrorist organization. In June, for example, Canada revised its list of terrorist organizations to include Combat 18.

Out of sight, but not quite

"The video is new. This group doesn't really communicate in this form," said Hendrik Puls, researcher of the far-right scene and an academic advisor to the NSU investigative committee established by the state parliament of North Rhine-Westphalia. "That shows they feel they're under pressure at the moment because of the new information about the Lübcke case."

For Puls, there is more evidence that Combat 18 is worried about state attention in the fact that one avowed neo-Nazi, Karsten H., came to police of his own accord to identify himself in a photo of a Combat 18 meeting taken in March in the town of Mücka, Saxony. German public broadcaster ARD had previously identified one individual in the photo as Stephan E. The fact that Karsten H. came forward to clear up the misidentification suggests that Combat 18 are keen to disassociate itself from Stephan E.

But there is plenty of other evidence indicating that Stephan E. had contact with the group. A photo taken in 2002, also uncovered by Exif, shows the suspect with Stanley Röske, a man known to Germany's domestic security agency as a leading member of Combat 18. Exif has also published what it says are the statements of a bank account run by Röske, which show the monthly C18 membership fees.

Despite its long history, it is hard to establish facts about Combat 18. It doesn't appear to be a large group. Exif has identified around 50 members, though the power structures among them largely remain a mystery. "They are certainly armed, and they boast about it," said Axel Salheiser, of the center for far-right research at the University of Jena. "It's a conspiratorial circle, but it's more of a network than a single organization."

The genesis of the group is well-known to observers of Europe's far-right scene. Founded in the UK in the early 1990s ("18" is code for AH, or Adolf Hitler), Combat 18 took over control of another neo-Nazi network, Blood & Honour, in the mid-1990s. The latter group was then already an international network, with branches in Germany, the US, and elsewhere.

Combat 18 spread with the help of this pre-existing network, and according to Exif, there are now at least 21 Combat 18 branches around the world, including in Brazil, Chile, Russia, the US, as well as throughout Europe, all identified by a common "coat of arms": a white dragon on the countries' respective national colors.

There is much to suggest that the group is careful about its membership. "It's certainly an elite circle; you can't easily become a member," Puls told DW, adding that what distinguishes Combat 18 from other neo-Nazi organizations is that it has always been associated with propagating armed struggle.

A list of internal "directives," also unearthed by Exif, suggests that potential members must undergo a six-month trial period to enter the group. Once approved by their neo-Nazi peers, they must pay a monthly membership fee of €15 ($17) "as emergency money (e.g. for the arrest of a brother)," wear specific clothes at meetings (a C18 t-shirt or jacket, black trousers, black shoes), and swear "absolute silence" on the group's internal affairs.

But all these details must be treated with caution. For his part, Salheiser wonders whether some of the information uncovered by Exif and other research organizations might not be propaganda "to confuse opponents and investigative authorities." "It's very difficult to tell," he said. "We have very little knowledge."

But the general activities of the group are relatively clear. As Puls explains, Combat 18 pursues two main activities: on the one hand, it administers what could be described as the neo-Nazi "music business," (mainly organizing rock concerts which double as mass gatherings) while on the other it propagates "leaderless resistance."

The concept of leaderless resistance is desribed in a number of neo-Nazi documents, many freely available online. "The strategy of leaderless resistance is that you don't create a hierarchical terror organization, where there is a command structure that passes down orders to people that carry out attacks," said Puls. "Instead, the concept is that you found very small cells that are detached from one another, and they activate without coordinating with each other, and without waiting for orders."

These cells are also not supposed to claim responsibility for these attacks. "They don't say: 'we did it,' they just kill migrants. That is Combat 18 ideology, and they set it down in writing, in the form of instructions for guerilla warfare, and distribute it," said Salheiser.

A 'honeypot' to attract the like-minded?

Given all these insights, it's a puzzle why Combat 18 remained legal in Germany, while Blood & Honour was outlawed in 2000. Combat 18 was considered by many the more militant arm of B&H, with countless videos of members brandishing guns in circulation. "It's basically an absurd story, the question of the ban [not being applied to Combat 18 as well]," said Puls. "It's absurd because since its foundation, Combat 18 has described itself as the armed wing of Blood & Honour."

Exif suspects that Combat 18 has been kept legal to act as a "honeypot" to attract other neo-Nazis, and that the entire organization, perhaps including its leadership level, is riddled with state-paid informants.

But Salheiser is skeptical about this idea, and believes that the informant network kept by Germany's domestic intelligence agency, the BfV, is simply not very effective. "They could neither prevent crimes being committed by people in these circles, or get us exact knowledge of who we are dealing with or, for example, how big the membership is," he said. Either way, the German government is now apparently preparing to outlaw the group, something many say it should have done decades ago.

Is the anti-immigrant AfD party a one-trick pony?