Mass shooting in Hanau: Grief and rage persist one year on  | Germany | News and in-depth reporting from Berlin and beyond | DW | 19.02.2021

Mass shooting in Hanau: Grief and rage persist one year on

Cetin Gültekin knows exactly where his brother was killed. He knows the route that the attacker took and where he got out of his car, shot the driver of a parking vehicle, and then, with a few short steps, reached the convenience store where he killed Gökhan Gültekin and four other people.

A year after the crime, the store is empty and slips of paper with the names of those killed are plastered on the windows. Cetin Gültekin points to a spot through the window pane.

"Where those two sockets are, that's where my brother's body was lying," he says. 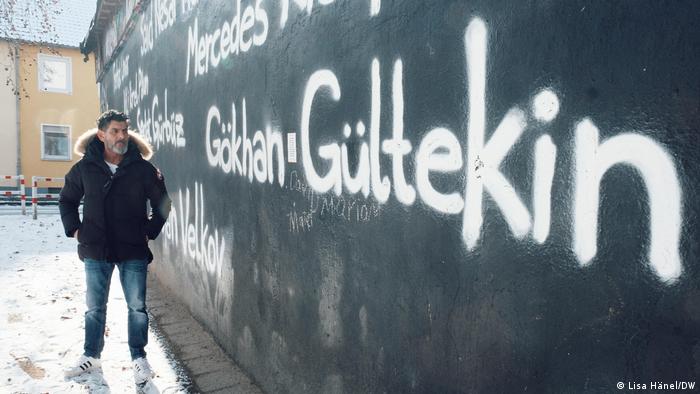 Gültekin in front of a wall where victims' names, including his brother's, are spray-painted

On February 19, 2020, the town of Hanau was the site of the single deadliest racially motivated attack in postwar Germany. A 43-year-old gunman who subscribed to paranoid racist theories shot nine people who had either migrated to Germany or whose families had over the course of one night at several locations in Hanau, in the state of Hesse. Afterward, it is believed that he killed his mother and then himself.

After the killings, there were shows of public solidarity with the victims and their families nationwide. German President Frank-Walter Steinmeier and Chancellor Angela Merkel attended a central memorial service. But, one year on, questions remain: Has the danger of nationalist violence been underestimated in Germany for decades? And has enough been done against right-wing extremism and racism since the attacks?

If you ask the families of the nine victims in Hanau, the answer is quite clear: No. Relatives of the people killed have joined forces with other supporters to form the February 19 Initiative and demand explanations.

The initiative opened a spacious office in central Hanau — not far from one of the crime scenes. But it is much more than just an office. It is also a memorial for the people killed. Photos and drawings of their faces hang on the walls and sit on the windowsill. 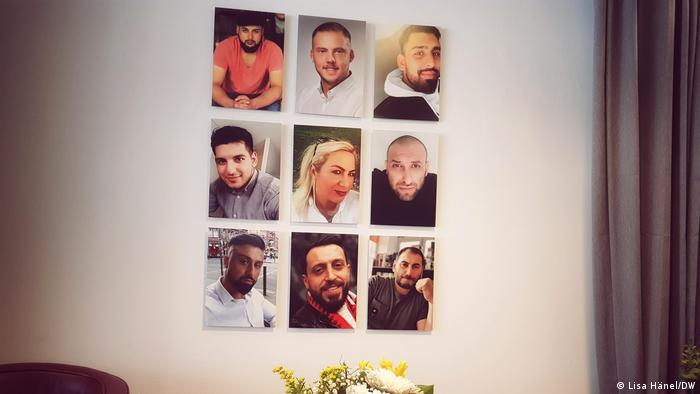 "For me, this room is as if we were visiting Gökhan," Gültekin says. "It's his living room. And, when the Unvar family comes here, it's Ferhat's living room." Gültekin, who comes here almost every day, is referring to Ferhat Unvar, who was killed in the store alongside his brother.

Much remains unresolved, tormenting the families. Why didn't the emergency phone line not work properly that night? If the police had been notified immediately after the first shots were fired, the gunman might have been stopped before he went on to the second location. Why was the killer allowed to legally possess weapons? Why had he not come to the attention of authorities even though he sent a confused letter full of conspiracy theories to the chief federal prosecutor months before the racist attack?

These questions may never be answered, partly because the attacker killed himself and will not stand trial. The federal prosecutor's office is still investigating, but so far there is no evidence that the attacker had an accomplice.

"Of course, it is very, very difficult to deal with the fact that the perpetrator will not be brought to justice and that one or two questions cannot be answered," says Helmut Fünfsinn, the commissioner for the victims of terror attacks in the Hesse state government. 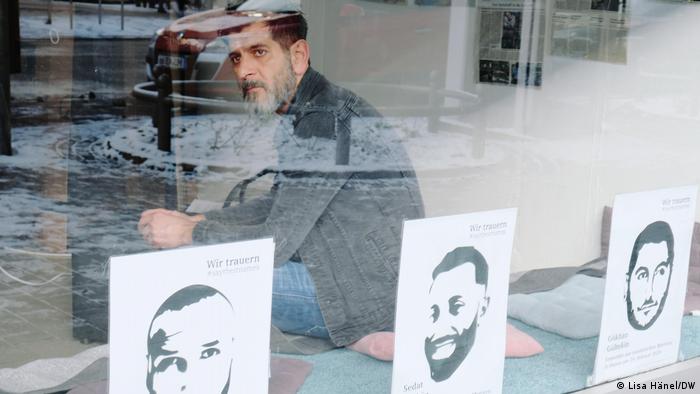 Gültekin at the office of the Initiative, where the victims are commemorated in drawings

Some of the questions that trouble the relatives of the people killed in Hanau go far beyond the town limits. The attack in Hanau was just one event in a series of extremist attacks.

In January 2021, a neo-Nazi was sentenced to life in prison for the June 2019 killing of Walter Lübcke, the leader of the Kassel regional government. In October 2019,a neo-Nazi in the city of Halle attempted to break into a synagogue. When this failed, he killed two people nearby. He has also been sentenced to life in prison. The attack in Hanau came four months after the killings in Halle.

For Andreas Zick, the director of the Institute for Interdisciplinary Research on Conflict and Violence at Bielefeld University, the attention paid to these acts could signify a change in society.

"There has been a shift in mood in Germany, where the challenge to deal with racism and other forms of discrimination is now taken seriously," Zick said. One example is an 89-point policy paper from the government on the fight against right-wing extremism and racism. It includes tougher laws, strengthening of security agencies, more funding for civil society organizations and more prevention work.

"Politicians have taken the issue to the highest political level by setting up a federal government committee to investigate right-wing extremism and racism. This underscores how important it is for us to take decisive action," Annette Widmann-Mauz, federal commissioner for migration, refugees, and integration, told DW.

Zick said Germany had underestimated the threat for decades: "Right-wing extremism has become strong. There is a whole network." Officials estimate that there are as many as 15,000 people in Germany who are prepared to commit violent acts of racism. Nationwide, security authorities had registered about 1,200 suspected right-wing extremists who legally possessed weapons through December 2020. This is an increase of almost 35% compared with the end of 2019, according to a response to a question posed to the German government by the Left party in parliament.

In addition, a new type of perpetrator has emerged in Germany with the attacks in Halle and Hanau: the lone wolf, isolated from society, radicalized online, deeply enmeshed in conspiracy theories. Security authorities do not yet have the technical means or the knowledge to recognize these perpetrators on the internet in advance. This became evident in the trial of the Halle attacker.

In general, however, the discussion about whether right-wing extremism has been underestimated does not go far enough, Zick said.

"We have not given ourselves enough time to understand how ideologies develop," he said. "Basically, there is always a call for the state to use its strength, and accusations are made against the security authorities, saying that they did not do enough. There may be explanations for this, but it shows that we don't see extremism as a challenge for society as a whole, but instead as a challenge only for the security authorities."

The thought patterns, ideologies and discriminatory views harbored by the perpetrators are directly drawn from society, Zick said. But, he added, people in Germany have yet to acknowledge that.

The 2011 killings of 77 people by the right-wing terrorist Anders Breivik in Norway were not viewed as the crime of an individual acting in isolation. "In Norway, people see the attack as something that happened in society," Zick said. "Anders Breivik is seen as a member of society. That would be a real challenge for us in Germany to admit: 'The Hanau attacker was one of us.' That would mean we have a social responsibility for his actions."

Cetin Gültekin must continue to live with the loss that the killer in Hanau inflicted. A year after the crime, he is still struggling with the consequences on his mental health: Gültekin can no longer work, cannot sleep through the night and smokes two packs of cigarettes a day.