Culture Minister Monika Grütters has handed over the painting, by artist Thomas Couture, back to Jewish heirs at a ceremony in Berlin. The canvas was stolen from French politician Georges Mandel during World War II. 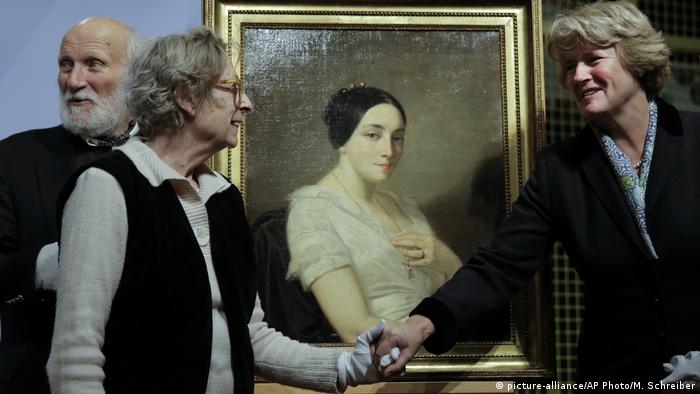 The painting by 19th century French painter Thomas Couture (1815-1879) was stolen from its owner, French politician and resistance leader Georges Mandel, by the Nazis during World War II. It was part of the massive collection stockpiled by the reclusive German collector Cornelius Gurlitt, who inherited 1,566 works from his father, Hildebrand, an art dealer for the Nazi regime.

Mandel's heirs appeared alongside Grütters, a representative from the French Embassy and Marcel Bruelhart of the Kunstmuseum Bern, to which Gurlitt had left his collection when he died in 2014.

Speaking at the ceremony, Grütters said, "This case again reminds us that we should never stop our wholehearted work in investigating the Nazis' looting of art, for which Germany is responsible.

Grütters emphasized the commitment of the German government to provenance research in an attempt to restore works when possible. She added that the restitution was "a moving conclusion to the exhibition of the Gurlitt trove." Some 450 paintings from the collection have been recently exhibited in Bern, Bonn and Berlin.

Citing the exhibitions, she said: "We have Georges Mandel's family to thank that we could show this work in all three exhibitions. In this way we could inform the public about the fate of the Jewish politician Georges Mandel, who was persecuted and imprisoned by the Nazis."

Mandel was ultimately executed by French fascists in 1944.

Art looted by the Nazis

The Couture work is the fifth painting from the Gurlitt collection to be returned to its legitimate owners, and the sixth to be identified as having been stolen by the Nazis.

Marcel Breuerhart of the Kunstmuseum Bern said, "What is decisive in the end is not the number of restitutions, but the honest and committed efforts in clarifying the origins of the complete works in the Gurlitt collection."

Identification of the painting was made possible by the testimony of Mandel's former partner, who stated after the war that the painting had a small tear in the sitter's chest area when it was stolen by the Nazis. Restoration experts at Germany's Bundeskunsthalle in Bonn were able to find the tear while conducting a rigorous examination of the piece.

The examination was carried out as part of the Gurlitt Provenance Research Project, which seeks to establish the history of ownership of the works in Gurlitt's possession at the time of his death. The discovery of the works made international headlines when German authorities unexpectedly stumbled upon them during a 2012 tax investigation.