A German federal police report says that deportation orders were up 17 percent, but that actual deportations were down 4 percent. Meanwhile, the labor minister argues that some of those being deported shouldn't be. 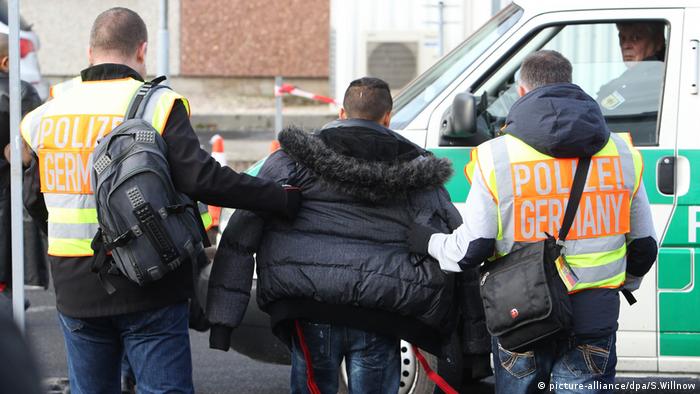 More than half of the ordered migrant deportations failed to be carried out through May, in almost all cases because the individual could not be located, a German newspaper reported on Sunday.

Through the first five months of the year nearly 24,000 people were ordered to be returned to their home country but only about 11,000 deportations were completed, according to an internal report by the federal police that was first reported by the Welt am Sonntag.

In all, 12,800 deportations failed, including 11,500 of people who were "not found" at the address where they were registered on the day they were to be repatriated. Some, although it's not clear how many, had gone into permanent hiding.

Of the remaining 1,300 failed deportations, the effort to send the person back to their home country was abandoned for various reasons, according to the paper.

In at least 500 cases the deportation effort was abandoned because of active or passive resistance. That represents an increase of more than 200 percent over 2017.

Read more: Germany to take in 50 migrants from Frontex ship

People from Nigeria and Guinea were most likely to resist deportation — more than 60 percent from each country. According to the report, the figure was more than 50 percent for Somalis and more than 40 percent for those from Syria.

The rate was more than 30 percent for asylum-seekers from Sierra Leone, The Gambia, Morocco, Iraq and Eritrea.

The chairman of the federal police union, Ernst Walter, said state and local authorities need to do a better job.

Ernst Walter, chairman of the Federal Police Union, told the newspaper: "It creates an enormous amount of work for the federal police that every second person to be deported is ultimately not delivered by the responsible state and local authorities." He said the only way to prevent them from disappearing is to "make much greater use of deportation detention."

"I sometimes have the feeling that the wrong people are forced to leave Germany," the SPD politician told the Augsburger Allgemeine.

He said it was not only bad for the refugees but also for the German companies that invested time and energy to employ refugees.

He noted that recent legislation allows young refugees who are in training to "complete their training and afterwards have the chance to stay in Germany for two years."

But he lamented that the states haven't executed the law uniformly, and pointed to the conservative Christian Social Union (CSU) that governs Bavaria as "particularly bad" stewards.

"This is a nuisance for all companies that get involved and are invested," he said.

Migrants whose asylum applications are rejected in Germany face the threat of deportation. Many live in the country for years on end, going from one temporary residence permit to another. Now, the German government has drafted a bill to change that.