Germany: Merkel's chosen successor Kramp-Karrenbauer will not run for chancellor

Annegret Kramp-Karrenbauer, the leader of Angela Merkel's conservative Christian Democrats, will not run for chancellor. She will also step down as party leader. 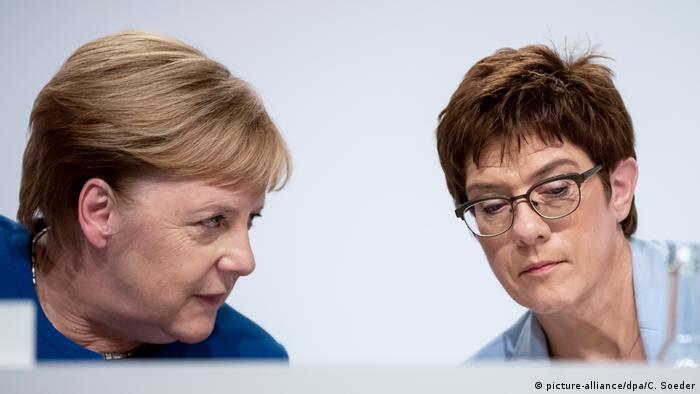 Annegret Kramp-Karrenbauer surprised fellow members of the Christian Democrats (CDU) on Monday by announcing that she would step down from her position as the head of the party and would not run for chancellor. She said the candidate for chancellor should also lead the party.

Kramp-Karrenbauer intends to stay on as defense minister.

She said she would organize the process of finding a new candidate by the summer and then step down from her leadership role.

Kramp-Karrenbauer spoke at a press conference held by the CDU in Berlin on Monday after her announcement. She spoke of the need to create a strong CDU, saying that recent events in the eastern state of Thuringia had weakened the party. CDU politicians and members of the right-wing Alternative for Germany (AfD) had combined to elect a member of the laissez-faire Free Democrats as the state premier, a break from the CDU's taboo on any form of collaboration with the AfD.

"The AfD stands against everything the CDU stands for. Every collaboration with the AfD makes the CDU weaker," Kramp-Karrenbauer said. "We must be strong, stronger than today. It's a job for all of us to worker towards a stronger CDU," she added.

Kramp-Karrenbauer said she thought that separating the candidate for chancellor and the party leadership roles would weaken the party "at a time in history and in Germany when it needs a strong CDU."

She said she had always known that leading the party "would be a difficult time, and the past two years have confirmed that."

The 57-year-old had been handpicked by Merkel, first to take over the CDU leadership, and then to run as her successor as the party's chancellor candidate in elections to be held in 2021.

Since then, AKK, as she is commonly known, has struggled through a series of scandals that have sowed doubt about her ability to lead the country effectively.

She had been criticized for her crisis management, including keeping Thuringia's CDU in line of late, and her inability to unite the party behind her. Her calls for fresh state elections in Thuringia were largely ignored by the party there.

The events in Thuringia did not directly affect the stability of the government in Berlin, said DW's chief political editor, Michaela Küfner. "But it again reaffirms that there is a leadership contest going on behind the scenes. And a key contender for that job, Friedrich Merz, just last week stepped down from his job at BlackRock Germany, the world's largest investment company, to make himself more available."

Last week, Merz wrote on Twitter that he planned to "be more active for this country" in the coming weeks and months.

Merkel's party is in a "leadership crisis," Küfner said. "Once again, there seems to be no alternative to Angela Merkel herself," she added. "That's a full-on political crisis within the CDU."

In 2018, Kramp-Karrenbauer had emerged victorious in the first grassroots contest for CDU leadership — which is traditionally tied to the chancellorship — winning against Merz, who is currently vice president of the business council of the CDU, and Health Minister Jens Spahn.

Merz took to Twitter to call for tax cuts and pushing through changes to the financial system — hallmarks of his political identity.

"In such a situation, smart reflection is more important than speaking quickly." the socially conservative Merz said via a spokesperson on Monday.

Spahn said he had great respect for the defense minister's decision and that she had united the party.

"The cohesion of our party must now be our guiding principle," he wrote on Twitter.

Members of an ultraconservative wing of the CDU came out in favor of Merz as party head.

The parliamentary group leader of the Greens, Katrin Göring-Eckardt, responded to the news by warning the CDU against shifting to the right.

"The CDU will now hopefully show that a Christian democratic party won't let itself be led around by the right-wing extremists in the AfD," she said.

Kramp-Karrenbauer had "plunged the CDU into chaos with her policy of exclusion," Gauland said.