Annegret Kramp-Karrenbauer used her first speech to reinforce her commitment to increasing military spending. AKK, as she is informally known, remains favorite to succeed Angela Merkel as German chancellor. 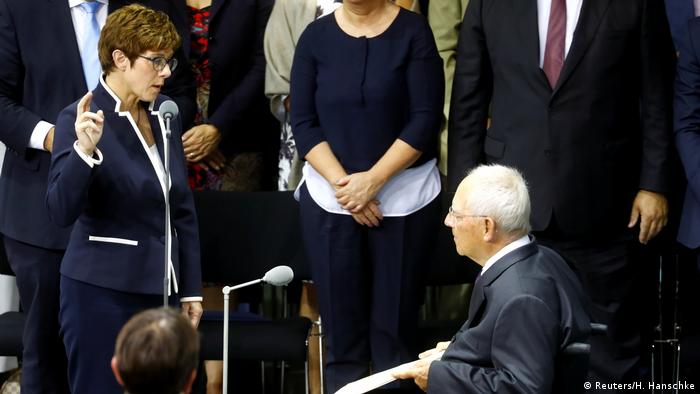 Annegret Kramp-Karrenbauer was sworn in as Germany's new defense minister on Wednesday morning at a special session of the lower house of the German parliament, the Bundestag.

The ceremony itself had a makeshift air about it. German lawmakers were called in from their summer holidays, with some opposition members grumbling at the fact that attendance had been made obligatory (with non-attendees forced to pay a fine). Others also pointed out the cost of the extra session — estimated at €100,000 ($112,000).

The swearing-in took place in a provisional plenary hall rather than the main chamber, which is being renovated over the summer break.

In her speech, Kramp-Karrenbauer emphasized the special bond between the Bundestag and the German military, which requires parliamentary approval before any foreign mission.

The new minister also hit all the important notes in her declaration. She promised to bolster defense cooperation within the European Union, and repeated her calls to increase the German defense budget, a controversial demand for some in the Social Democratic Party (SPD, the junior partners in the government coalition,

But the US and other NATO partners have long demanded that Germany boost defense spending to meet the alliance's target of spending 2% of GDP on defense.

"I am committed to the government's target of 2%, a target that all allies have repeatedly agreed to," Kramp-Karrenbauer said in her speech. The government's current defense budget plans would see Germany reach 1.5% by 2024, but its rhetoric in the past few years has been about increasing its responsibility abroad.

"For a long time, perhaps too long, we believed that the world around us would become more and more peaceful, and the order more stable," the new minister said. "Developments in the last few years have shown that was deceptive. That's why we have now flipped the switch."

She went on to promise that Bundeswehr soldiers would be provided with enough equipment and training hours, a sore point over the past few years, which have seen several reports that the German military equipment is short of spare parts.

Experience counts after all

The defense minister's seat was abruptly vacated last week, when the incumbent Ursula von der Leyen was elected as the new European Commission president by the European Parliament.

Kramp-Karrenbauer was a surprising choice to take over, given she has only recently been elected leader of Angela Merkel's conservative Christian Democratic Union (CDU), and had repeatedly promised that she would concentrate on reinvigorating the party ahead of crucial regional elections in the fall.

In the meantime, though, the CDU leadership appears to have decided that the 56-year-old former state premier of Saarland did need federal government experience after all. With the CDU still polling as Germany's biggest party, Kramp-Karrenbauer is currently in pole position to succeed Merkel as chancellor.

In the hour-long debate after Kramp-Karrenbauer's speech, opposition members lost no time accusing the CDU of using the defense ministry as a training ground for a chancellor-in-waiting.

"The CDU is the biggest threat to our security," said Rüdiger Lucassen, of the far-right Alternative for Germany (AfD), before dismissing Kramp-Karrenbauer as a "security policy novice."

The Green party's Agnieszka Brugger made the same point in her equally critical remarks. "This office is too important to just be a way station for people who see themselves on the way up," she told the chamber. What the military needs, she said, was political leadership that "dedicates itself unglamorously and solidly to the Bundeswehr's immense problems."

Brugger also argued that the German military's problems wouldn't be solved with money, pointing out that the German defense budget had already risen by €10 billion since 2014 (from €32 billion to €42 billion).

For the sharp-eared political pundit, the debate also offered some clues to the potential tension within the government coalition. The Social Democrats' interim parliamentary leader Rolf Mützenich criticized the tone of Kramp-Karrenbauer's speech, which he deemed too confrontational. He wondered whether her "concept of security" was still up to date, and suggested she might consider "easing tensions, with for example Russia."