Long considered German Chancellor Angela Merkel's anointed heir, Annegret Kramp-Karrenbauer has been building her international profile. But within party ranks, debate is simmering over whether "AKK" is fit for the job. 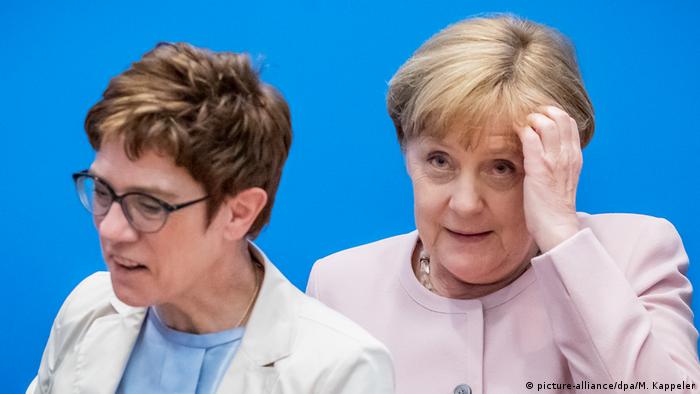 Regardless of the issue of the day back in Germany, whether it's migration, austerity in the eurozone or climate change, Angela Merkel's image abroad — particularly among the left-leaning mainstream in the United States — has been left relatively untarnished.

Celebrated recently at Harvard University as a liberal hero — much to the chagrin of left-wing liberal Germans — Merkel's popular presence on the Western liberal stage has by and large been a constant since her inauguration as chancellor in 2006.

Now with her time at the helm of German politics drawing to a close, having announced last December that she would not be running for re-election in 2021, it was time for Merkel's protegee and heir-apparent Annegret Kramp-Karrenbauer — or AKK as she's become known in Germany — to take to the international floor in Berlin on Wednesday at the 2019 German American Conference.

After a pragmatic and frank 18 months of relations between Merkel and the Trump administration, Kramp-Karrenbauer set her own course for addressing strained trans-Atlantic ties, defending the US president against what she sees as excessive criticism. "When Presidents Trump, Putin and Erdogan are mentioned in the same breath here in Germany, as they are all too often, this is a false equivalence that cannot be tolerated," Kramp-Karrenbauer said.

Trump's presidency had again brought some Germans' longstanding "anti-American reflexes" to light, she said, arguing that it was important "make clear the differences with Russia."

Addressing the longtime debate over Germany's defense spending, which has been criticized on numerous occasions by US President Donald Trump, Kramp-Karrenbauer also made a clear commitment to NATO's goal of spending 2% of gross domestic product on defense.

"It's about mutual trust. It is also about the question of whether Germany is a reliable partner," Kramp-Karrenbauer said, adding that the US, too, has its own responsibilities and must contribute to international climate protection efforts and help the European Union respond to the challenge of a growing China. 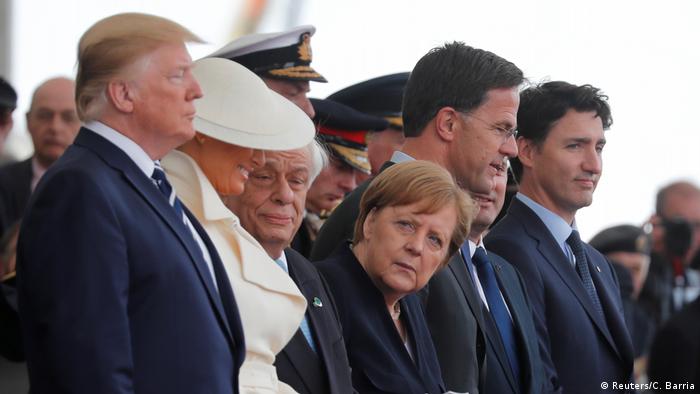 But in the background of her successor's profile-building, Merkel's well-orchestrated transfer of power to Kramp-Karrenbauer appears in recent weeks to have been slowly fraying at the edges after a series of blunders on AKK's part, throwing her potential as a 2021 chancellor candidate into question.

The European Parliament elections in May were Kramp-Karrenbauer's first test in a national vote since replacing Merkel as leader of the Christian Democrats (CDU) six months ago. The conservatives took a beating at the polls, walking away with just 28% of the vote — down 7% since 2014 — and lost more than 1 million votes at the ballot box, largely to the gain of the Green Party.

In the aftermath of the poor results, Kramp-Karrenbauer poured oil on the fire of discontent among voters after dubbing a series of viral YouTube videos, which urged voters to punish the CDU and its Social Democrat (SPD) coalition partners over climate inaction, as political "propaganda" and was accused of calling for censorship on opinions expressed online ahead of elections.

Kramp-Karrenbauer responded by describing the subsequent accusations as "absurd."

"Freedom of opinion is a valuable asset in a democracy. But what we need to talk about are the rules that apply during an election campaign," she said, admitting that she and her party had failed to connect with young voters.

Already in march, Kramp-Karrenbauer faced a huge backlash over a badly-received gaffe at the expense of intersex people during a routine for traditional Carnival celebrations.

And voters are taking note. According to a Forsa opinion poll released shortly after May's elections, 70% of respondents said Kramp-Karrenbauer is not suited to take over as chancellor. Even among her own CDU party, 52% considered Kramp-Karrenbauer not up to the chancellor's job.

The string of faux-pas has led to debate among conservative politicians over whether Kramp-Karrenbauer is fit for German politics' top job.

While the leader of the CDU's right wing, Alexander Mitsch, has called for a primary election of the party's chancellor candidate at short notice, conservative parliamentary group leader Ralph Brinkhaus said Tuesday that he was convinced Kramp-Karrenbauer would run as chancellor in the next federal elections.

Potential conservative competitor and State Premier of North Rhine-Westphalia Armin Laschet quickly attempted to close down the debate on Wednesday, however, reiterating that the party will settle on a chancellor before the planned elections in two years' time — just weeks after he himself said Kramp-Karrenbauer's candidacy for the chancellery was by "no means certain."

Despite the remarks from Laschet, Germany's political parties could still face the task of selecting a chancellor candidate before the year is out if the expected losses in eastern state elections this coming fall push Merkel's government over the edge — leaving no more time for blunders.