Support for the center-left and center-right parties in the run up to September's election has leveled out. Support for Merkel's CDU has fallen since the 2017 election. 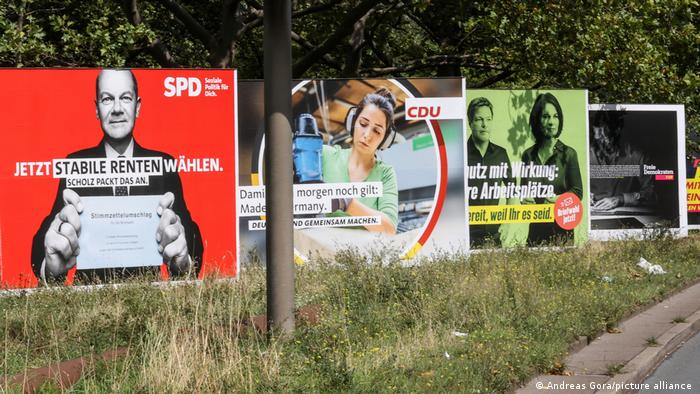 With just five weeks to go until Germany's parliamentary elections, the two parties in the current ruling coalition are set to win similar numbers of votes, according to a recent poll published by research institute INSA on Sunday.

The center-right conservative bloc (CDU/CSU) and the center-left Social Democrats (SPD) polled equally at 22% for the first time in an INSA poll since April 2017.

Chancellor Angela Merkel's CDU dropped three percentage points since August 14, while the SPD were up two percentage points. This leaves the SPD leading the Greens despite the latter's dramatic rise earlier in the year.

Polling remained stable for the other main parties: The Greens, the pro-market liberal Free Democrats (FDP), the far-right Alternative for Germany (AfD) and the far-left Left (Linke) party.

If the poll results are the same on election day, September 26, no party will be able to form a government alone, likely leading to months of negotiating to build a coalition between several parties.

The current coalition of SPD and CDU would no longer be viable as together they would not control 50% of Bundestag. One of the key questions in the lead up to the election is which parties would be willing to enter a coalition with which other parties.

Sunday's poll, although far from being a final representation of voters' decisions on election day, marks a large drop in support for the conservatives since the 2017 election when they won 33% of the vote.

With Merkel stepping down as chancellor this year, there has been a lot of debate over whether her successor as head of the CDU, Armin Laschet, can prove as successful as her.

Although Germans do not vote directly for the chancellor, polls have shown Laschet's own personal popularity to be relatively low. The chancellor candidate for the SPD, Olaf Scholz, has continuously proven to be the most popular candidate with 34% of those polled saying they would vote for him to be chancellor if it were possible.