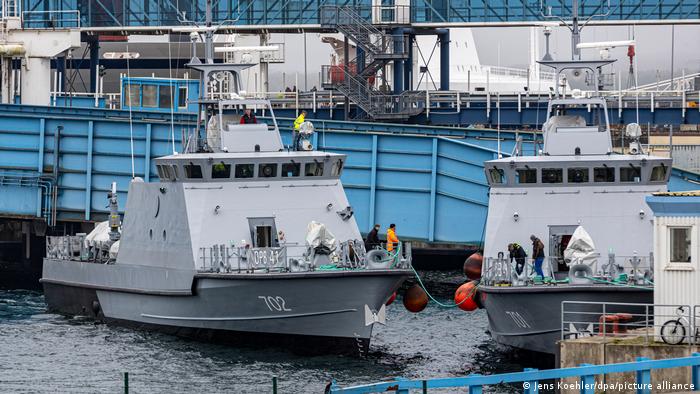 Germany is one of the top weapons exporters in the world

Then-Economy Minister Peter Altmaier sent a letter about the deals on December 7 to Bundestag President Bärbel Bas, one day before the swearing-in of Chancellor Olaf Scholz.

What do we know about the deals?

The weapons agreements disclosed in the letter include the delivery of three MEKO A-200 EN frigates to Egypt from Kiel-based Thyssenkrupp Marine Systems, along with 16 air defense systems from Diehl Defense, which is located in the southwestern German state of Baden-Württemberg.

A sale of a type 218 G submarine to Singapore from Thyssenkrupp was also divulged in the letter.

The three agreements were approved by the Federal Security Council, which includes not only the chancellor but also several ministers, such as the minister of finance. The Finance Minister under the previous Merkel-led government was Scholz, meaning Germany's new chancellor was aware of the agreements.

The disclosure of the weapons deals has sparked anger from some German political leaders due to Egypt's poor human rights record and its involvement in Yemen's civil war.

Agnieszka Brugger, a leading member of the Green Party in the German Bundestag, slammed the arms deal by the previous government "in their last hours."

She said it was a politically calculated move, as the Green Party, which is represented in the new governing coalition with Scholz's center-left SPD and the business-focused FDP, would likely not have approved such a decision.

These types of deals have also been sharply criticized by leaders of Germany's Christian community, an important voting bloc for the Christian Democratic Union (CDU), which after 16 years with Merkel at the helm of the country now leads the political opposition.

Martin Dutzmann, the Protestant chairman of the Joint Conference Church and Development (GKKE) said he has little understanding for such deals and called current arms controls "inadequate." He said arms licensing has not been restricted legally or politically.

The German government issued €5.82 billion ($6.59 billion) in individual export licenses for weapons in 2020. Half of this figure consisted of weapons permits to so-called "third countries" outside of NATO and the European Union.

Simone Wisotzki, an international security expert and project leader at the Peace Research Institute Frankfurt, told DW it is "no longer justifiable to speak of exceptional cases" in regards to exports to "third countries." She said sales to these nations have instead "become the rule."

Karl Jüsten, the Catholic chairman of the GKKE, said Europe as a whole is exporting more arms to outside countries, most notably the UAE and Saudi Arabia.

The new German government between the SPD, Greens and FDP has agreed to implement a "restrictive weapons export policy," particularly in regards to countries that are involved in Yemen's war. Jüsten has welcomed the announcement, but it's unclear if the new governing coalition will keep to its promise.