A deadline has passed for lawmakers from Germany's governing conservative party alliance to prove they didn't pocket profits from face mask sales. The scandal comes ahead of state elections on Sunday. 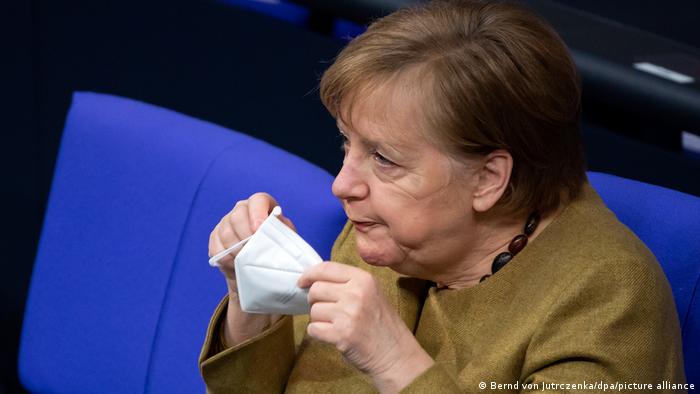 A Friday evening deadline has now passed for lawmakers from Germany's governing conservative bloc to declare that they had not profited from the COVID-19 pandemic.

Lawmakers from Chancellor Angela Merkel's ruling party were told to put their declaration in writing by 6 pm (1700 GMT/UTC), saying they hadn't received money for consulting or procurement activities tied to the COVID crisis.

Shortly after the deadline passed, party officials said that all 240 conservative lawmakers had sent back their declaration on time.

The ultimatum was issued after further revelations emerged in Germany's face mask procurement scandal, causing more embarrassment ahead of regional votes on Sunday.

What is the face mask scandal?

The scandal made headlines this week when Christian Democrat (CDU) lawmaker Nikolas Löbel quit his seat.  His colleague Georg Nüsslein from the Bavarian sister party CSU had earlier stepped down.

Both faced accusations that they had received payments for brokering face mask procurement deals.

Nüsslein was last month placed under investigation for corruption after it was alleged that he accepted some €600,000 ($715,000) to lobby for a mask supplier.

Löbel's company made €250,000 in commissions for acting as an intermediary in mask contracts.

A third lawmaker, Mark Hauptmann, gave up his seat on Thursday — partly in connection with the mask scandal.

Florian Toncar of the liberal business-friendly FDP told DW it posed a "moral hazard" for the entire Parliament.

"You cannot call them individual cases anymore, as in that short period of time so many cases have emerged. And I mean, the party leadership of the conservatives is not yet clear whether the list is already completed or whether further cases will emerge."

What are the political consequences?

The allegations that the men profited from a crisis triggered widespread outrage amid frustration and weariness over Germany's extended lockdown.

The ruling CDU/CSU alliance, which is also facing criticism over the slow rollout of the vaccine program, sought to clean house ahead of Sunday votes in the states of Baden-Württemberg and Rhineland-Palatinate.

Merkel's party announced a 10-point plan to tighten regulations on lobbying and bribery in the Bundestag. The plan foresees the prohibition of paid work on behalf of third-party interests in the Bundestag.

Lawmakers will also have to declare all additional income down over €100,000 ($119,500) to the last cent. On top of that, the plan would lead the way for a minimum of one year of jail time for lawmakers who are caught accepting bribes.

The Social Democratic Party (SPD) also laid out a plan to tackle corruption and lobbying. It resembled the CDU plan, however, their proposal would also ban lawmakers from taking payment for any consulting they might do. Lawmakers would also have to declare ownership of any shares that come to more than 5% of a company's stocks.

German President Frank-Walter Steinmeier on Friday said the idea of German lawmakers enriching themselves on deals to procure coronavirus protective masks was "shameful."

Steinmeier said the case went far further than individual misconduct, referring to it as "poison for democracy."

The president — a member of the conservatives' junior coalition partner, the center-left Social Democrats — urged all parties represented in the Bundestag to "clarify not only quickly, but above all reliably, whether further cases are to be feared."

"Anyone who deliberately misuses their mandate in order to enrich themselves personally not only damages others who are honestly doing their democratic work - that harms democracy," said Steinmeier.

"Anyone who acts like this simply has no business in the Bundestag," he said.

Opinion: Masks, money and a lack of morals among Germany's conservatives