Members of the Yazidi minority in Germany are taking the federal government to court. They say Berlin isn't doing enough to bring German "Islamic State" supporters captured in Syria to justice. 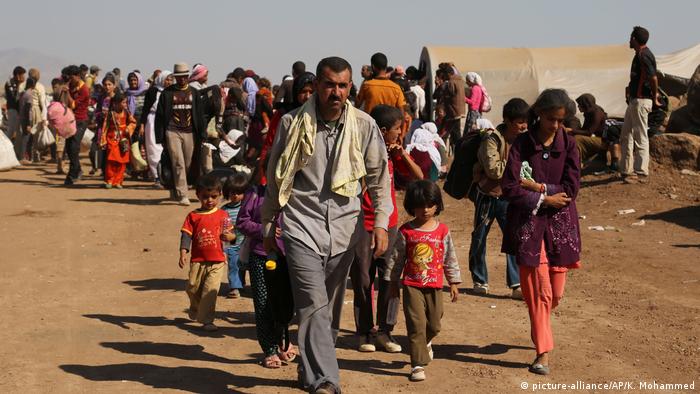 The Yazidi Women's Council has filed a lawsuit against Germany's justice and interior ministers, alleging obstruction of justice, according to German media reports.

The interest group accuses the government of failing to prosecute German supporters of the "Islamic State" (IS) militia who are being held by Kurdish-led forces in northern Syria.

Hundreds of IS foreign fighters and their families are in Kurdish custody. The question of how they should be dealt with is a difficult problem that many European countries, including Germany, are grappling with.

Dozens of Germans in Kurdish detention

According to information cited by public broadcasters NDR and WDR, there are at least 74 German IS supporters currently in Kurdish custody in Syria. The Federal Prosecutor's Office has arrest warrants for 21 of those individuals on charges ranging from support of a terrorist organization to committing war crimes.

In comments cited by the two broadcasters, the Yazidi Women's Council said the government in Berlin had committed the "criminal offense of obstruction of justice" by refusing offers from the Kurdish administration to return these suspects so that they may be tried in Germany.

"The result of this refusal to transfer German nationals in the custody of the local administration in northern and eastern Syria ... has delayed — if not prevented — punishment (from being doled out)," lawyer Berthold Fresenius was quoted by the broadcasters as saying.

The Interior Ministry told NDR and WDR that all German citizens have the right to return to Germany and to face trial there. But Germany, like France, has decided to let countries in which alleged crimes were committed prosecute and convict foreign IS members, as long as the accused have access to consular officials and don't face the death penalty.

A number of Germans have already faced trial in Iraq, but the situation is more complex in Syria. Germany has no official relations with the unrecognized Syrian Kurdish administration and any legal decisions from the entity would be invalid under international law.

In 2014, IS fighters overran Yazidi villages in northern Iraq, murdering thousands of people. About 7,000 women and girls were abducted and enslaved. Some German nationals are accused of taking part in the carnage.

The Yazidis are a Kurdish-speaking minority with a unique monotheistic religion and roots in Syria, Iraq and Turkey. Today there are large numbers of Yazidi refugees living in Armenia, Georgia and Russia. About 150,000 live in Germany — the largest community of Yazidis in exile.

EU officials are cautiously optimistic about post-Trump US 3h ago