Germany has banned the extremist group "Islamic State," whose fighters have seized substantial amounts of territory in northern Iraq and Syria. The interior minister described the group as a threat "also for Germany." 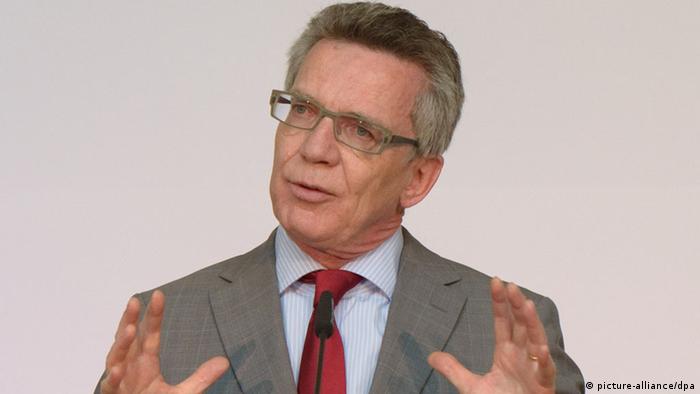 Interior Minister Thomas de Maiziere used a press conference in Berlin on Friday to announce the measure, saying the ban was immediately in effect.

"The terror organization "Islamic State" is a threat, also for public security in Germany," de Maiziere said. "We are resolutely confronting this threat."

De Maiziere said the ban applied to any activities linked to the self-proclaimed "IS," including taking part in demonstrations or supporting the group through social media. It also included the wearing or display of IS symbols or collecting donations in the group's name.

"Today's ban is an important step in the battle against international terrorism," de Maiziere said.

The interior minister said that German intelligence agencies believed that around 400 sympathizers of the IS had left the country and that some of these had returned to Germany.

"We must prevent radical Islamists from bringing their jihad to our streets," de Maiziere said.

Asked by a reporter whether the ban would make Germany safer than without it, the interior minister conceded that it wasn't yet clear what effect it would have on domestic security. However, he also said this was not an argument against implementing the ban.

Just hours before de Maiziere announced the German ban, French President Francois Hollande arrived in Baghdad for a one-day visit in which he was expected to discuss the possiblity of France joining US-led air strikes on IS fighters in northern Iraq.

The United States’ key Middle East allies have agreed to back a US-led military operation against extremist "Islamic State" fighters. The operation, proposed by US President Obama, now awaits backing from US Congress. (11.09.2014)