French President Francois Hollande has begun a one-day visit to Iraq. Hollande's visit came as his country's military was preparing for possible airstrikes on "Islamic State" militants in northern Iraq. 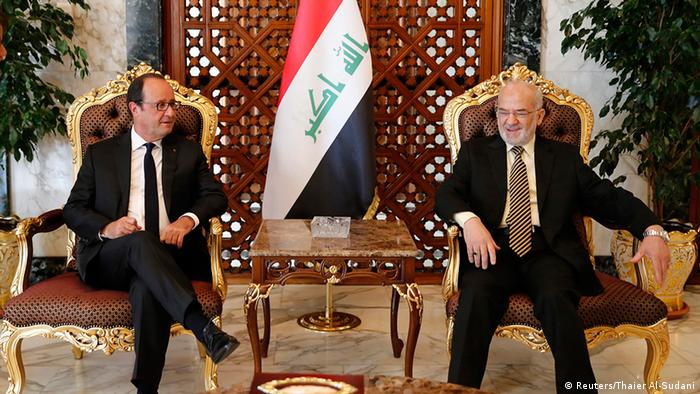 President Hollande's plane, which landed in Baghdad early on Friday, was carrying 15 tonnes of humanitarian aid - to be delivered to the mainly Kurdish city of Irbil in northern later in the day.

Hollande, who is being accompanied on the trip by Foreign Minister Laurent Fabius and Defense Minister Jean-Yves Le Drian, was to meet with his Iraqi counterpart, Fuad Masum, as well as the new prime minister, Haidar al-Albadi.

The French president was expected to use his talks to discuss the possibility of France launching airstrikes on the self-proclaimed "Islamic State" (IS) militants, who have taken control of large parts of northern Iraq and Syria in recent months.

Foreign Minister Fabius said on Wednesday that France was prepared to take part in US-led airstrikes against IS militants "if necessary."

The French government has been supplying arms to Kurdish forces fighting against IS militants since August.

Hollande's visit, which is being seen as an expression of support for the new government in Baghdad, comes just hours after the US Central Intelligence Agency more than doubled its estimate of the number of IS militants fighting in northern Iraq and Syria from the previous 10,000 to between 20,000 and 31,500.

"This new total reflects an increase in members because of stronger recruitment since June following battlefield successes and the declaration of a caliphate, greater battlefield activity, and additional intelligence," CIA spokesman Ryan Trapani said on Thursday.

Also on Thursday, 10 Arab states agreed to "do their share" to support US and Iraqi efforts to defeat IS extremists in northern Iraq and Syria.

Following a meeting with US Secretary of State John Kerry, in Jeddah, the Arab foreign ministers pledged to back a strategy to "destroy" the IS "wherever it is, including in both Iraq and Syria."

US to fly attacks on IS from Irbil

The Pentagon has said that US aircraft will soon start flying out of a base in the Kurdish city of Irbil in northern Iraq. The move comes after President Barack Obama's decision to escalate the campaign against 'IS.' (11.09.2014)

The US is in search of partners in its military campaign against IS. A number of Arab states could join the "coalition of the willing" and could contribute in many ways. But there are also reservations. (11.09.2014)

Britain, Germany not to join US campaign against IS

Britain and Germany have said they will not participate in any airstrikes on Syria. However, they will consider other ways of eliminating the "Islamic State" group from Iraq and Syria. (11.09.2014)