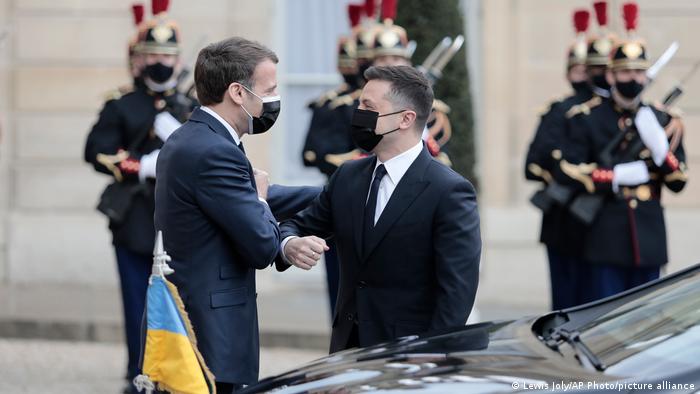 The leaders are hoping to deescalate tensions

The leaders of Germany, France and Ukraine, after holding a video conference on Friday, urged Russia to withdraw the additional troops it has amassed on its border with Ukraine and in occupied Crimea over recent weeks.

German Chancellor Angela Merkel, French President Emmanuel Macron and Ukrainian President Volodymyr Zelenskyy shared concern over the military build-up, the chancellery in Berlin said in a statement, adding, "They demanded the withdrawal of these reinforcements to reach a de-escalation."

Zelenskyy traveled to Paris to meet Macron where the two also spoke with Merkel via video link to address Russia's recent troop deployments.

The talks came as Kyiv and the West have reacted alarmingly in recent weeks over the Kremlin's military presence along the Russia-Ukraine border.

The leaders of Ukraine, Germany and France want to deescalate tensions in the region and hope Friday's talks are a step in that direction.

And Zelenskyy wants action, not words. "It's time to stop talking and to make decisions," he said on the eve of the talks in an interview with French newspaper Le Figaro.

"Europe's security depends on Ukraine's security," Zelenskyy said, adding his country is seeking support from NATO as he once again expressed Kyiv's determination to join the military alliance.

"If the EU and Emmanuel Macron consider us as a true member of the European family, they must act accordingly."

Zelenskyy on Friday also emphasized his commitment to peace, telling the Italian newspaper La Repubblica, "Since the beginning of my mandate I and my staff have done everything possible to intensify negotiations and reach a peaceful solution."

Both the US and NATO have described Moscow's military deployment on along the border as larger than at any point since 2014.

More than 14,000 people have died in seven years of combat between Ukrainian forces and Russian-backed separatists in eastern Ukraine. The conflict erupted in the immediate aftermath of Russia's annexation of Ukraine's Crimean Peninsula.

Violations of an already vulnerable truce have become a common occurrence in recent weeks across Ukraine's eastern industrial heartland known as the Donbass.

Ukrainian Ambassador to the UK and former Foreign Minister Vadym Prystaiko told DW that the level of fear in Ukraine has increased of late.

"What we fear the most is a full-scale invasion of Ukraine," he said. "Today, Kyiv authorities have publicized the map of the bomb shelters to the population, just in case. People started buying imperishable foods. So, that's how high expectations and the fears are in Ukraine."

Ukraine has become much stronger with Western allies' support, "still, the forces are incomparable" to Russia, Prystaiko said.

Kremlin says Merkel and Macron should rein in Ukraine

The Kremlin, however, took a rather different view of what should happen at the conference: "It would be very important for us that Macron as well as Merkel use their influence ... to transmit the Ukrainian head of the state the message of the necessity of an unconditional ceasefire along the line of contact," said Kremlin spokesperson Dmitry Peskov.

Moscow also announced on Friday that it intended to shut down areas of the Black Sea to foreign military vessels for the next six months as it conducts naval maneuvers in the area. Though many see the move as a direct provocation, Russia says the closures will not affect the Kerch Strait, which connects the Sea of Azov and the Black Sea and has been the site of ongoing naval tensions between Moscow and Kyiv.

The US has announced sanctions against Russian entities and expelled 10 Russian diplomats in response to a hacking attack and election interference.